India’s might be fastest growing economy in world beating china by whisker but the population growth is 2 times that of china. As the 12th Five Year Plan (2012-2017) document pointed out: “One hundred and eighty-three million additional income seekers ( 18.3 crores) are expected to join the workforce over the next 15 years.” This essentially means that a little over 12 million individuals will keep joining the workforce every year, in the years to come. This works out to around one million a month. And at this rate, the Indian workforce is expected to be larger than that of China by 2030. India urgently needs promised demographic dividend 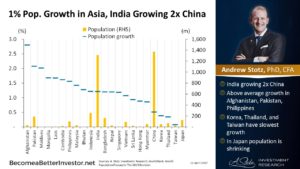 India’s govt debt to GDP is low as compared to rest of the g-20 countries and that means in absence of corporate capex , either Govt creates conditions for Foreign money to invest in India or GOVT will have to expand its balancesheet ( which will lead to higher inflation)  if it wants employment for its people and raise their standard of living.As per Andrew Stotz India could expand per capita GDP for decades if helped by Govt policy .

This is as per Mckinsey …….which states that India’s domestic capital-goods sector is under-developed, weighed down by low investment in technology and talent. That may be changing and it will help both employment generation and increase in per capita GDP

As India has emerged as the world’s fastest-growing large economy, it’s no surprise that demand for capital goods has more than doubled in the past decade. Yet one-third of this demand has been met by imports: India imported machinery worth more than $30 billion in 2015, making it the fourth-largest import category after crude oil, electronics, and gold. For a $2 trillion economy, the country’s capital-goods sector remains relatively underdeveloped, offering a significant business opportunity for both Indian and foreign original-equipment manufacturers (OEMs).
India’s domestic capital-goods industry is weighed down by low investment in technology and talent. Most companies focus on low-value-add fabrication and assembly work, unable to move up the chain with their designs or technology. Value addition represents only about 22 percent of total output, or $13 billion, and the capital-goods sector as a whole accounts for just 0.6 percent of India’s GDP, compared with 4.1 percent for China, 3.4 percent for Germany, and 2.8 percent for South Korea (exhibit). The output of domestic capital-goods players grew by an average of 2 percent annually from 2010 to 2015, trailing the overall average of 7 percent annual economic growth. 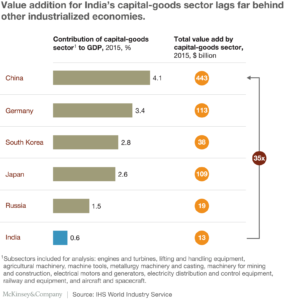 Mckinsey report further states that If the capital-goods sector develops as we envision, it could deliver annual earnings of about $3 billion to $4 billion and create up to five million jobs.