ValueWalk
Home Business Is Cardinal Health A Better Bargain Than Ever?

The S&P 500 is trading at a historically expensive valuation, propped up by low interest rates, quantitative easing, and positive investor sentiment. This has made it difficult to find bargains in today’s stock market.

One of the best ways to identify value is by looking for companies experiencing short-term trouble.

Cardinal Health (CAH) is an example of this right now – the stock has dropped more than 10% in today’s trading.

Cardinal’s stock price is a result of lowered guidance for fiscal 2017 after the announcement of a $6.1 billion acquisition of Medtronic’s (MDT) Patient Care, Deep Vein Thrombosis and Nutritional Insufficiency businesses.

Despite the company’s lowered guidance, it is still a high-quality business and makes an attractive investment at today’s price. The company is also a consistent dividend raiser, increasing its annual payout for 39 consecutive years. 2017 will likely mark the company’s 40th consecutive annual increase.

Cardinal Health is more than qualified to be a member of the Dividend Aristocrats – a group of companies with 25+ years of consecutive annual dividend increases.

You can see the list of all 51 Dividend Aristocrats here.

Why the Price Decline?

Cardinal Health announced this morning that the company was acquiring three Medtronic businesses for a total of $6.1 billion. Given that Cardinal Health currently has a market capitalization of ~$23 billion, this is a substantial acquisition for the company.

Despite the size of the transaction, Cardinal Health is not diluting its existing shareholders. The company is funding the purchase with a combination of unsecured notes and existing cash & equivalents. This acquisition is expected to be accretive to the company’s earnings-per-share immediately.

Previously, the company had forecasted adjusted earnings-per-share of $5.35-$5.50 for fiscal 2017. Now, the company expects the coming year’s earnings to be “at the bottom of its previous guidance range of $5.35 to $5.50”. Cardinal Health also stated that their “preliminary fiscal 2018 view is for Non-GAAP EPS to be flat to down mid-single digits”.

Looking at the numbers, I am convinced that the markets have overreacted to Cardinal Health’s updated guidance. Investors who expected the company to report the top of their guidance band ($5.50) have now seen a 2.7% decrease in guidance (to $5.35). However, the stock price has decreased by more than 10%, likely because of the negative guidance with regard to fiscal 2018.

In the long-term, fiscal 2018’s potential for a slight decrease in earnings-per-share is immaterial.

“The single greatest edge an investor can have is a long-term orientation.” – Seth Klarman

Cardinal Health was founded in 1971 and has increased its annual dividend for 39 consecutive years. It is highly likely that the company will be worth far more 5, 10, or 20 years from now.

For investors with shorter time horizons, the company’s earnings-per-share pressure is likely short-lived. The company stated in their updated guidance “fiscal 2019 Non-GAAP EPS is expected to grow at least high-single digits versus fiscal 2018.” Thus, investors with at least a 3-year time horizon should benefit from owning Cardinal Health.

To conclude, Cardinal Health’s stock price dropped by ~11% on guidance lowered by ~2.7%. In a perfect world, the stock price would have dropped by ~2.7% as well – but this presents a buying opportunity for value-focused investors.

The rest of this article will be devoted to Cardinal’s business model and expected total returns.

Cardinal Health is one of the three largest name-brand and generic drug distributors in the domestic United States. Its main competitors are McKesson (MCK) and AmerisourceBergen (ABC). These three companies have a dominant market share of around 85%.

The pharmaceutical segment is involved in pharmaceutical distribution for both branded and generic drugs. This segment’s performance during the most recent quarter can be seen below. 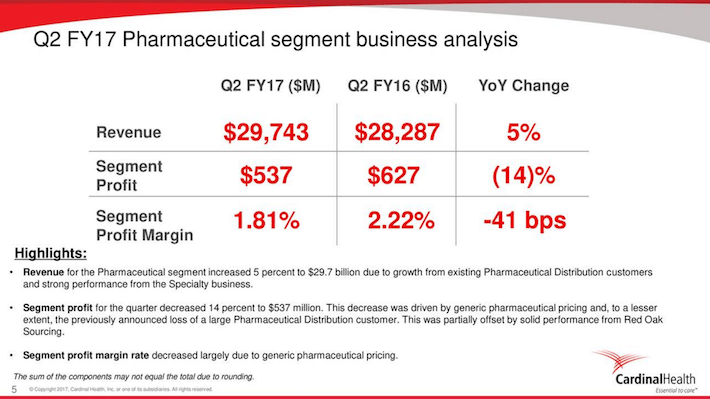 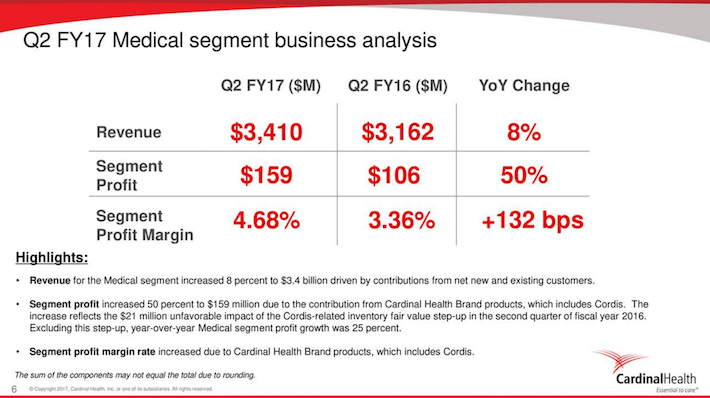 It should be noted that the company’s Pharmaceutical segment is much larger than its medical segment, contributing ~90% to second quarter revenues. Also, each of the two segments has razor-thin margins, with neither reporting margins above 5%.

Cardinal Health’s performance during the past five years is very impressive and is outlined below.

Looking ahead, Cardinal Health’s growth will be driven by positive secular trends in the United States. The domestic population continues to age, and prescriptions will increase as a result. This will provide a major tailwind for Cardinal Health.

Cardinal Health is very recession resistant and managed to grow its earnings-per-share during each year of the global financial crisis. The company’s thin operating margins provide a key benefit for Cardinal Health by limiting new entrants and increasing the company’s scale-based competitive advantage.

Today’s price decline has made Cardinal Health’s valuation much more attractive. Valuation expansion will likely be a strong contributor to future shareholder returns. The current stock price of $72.45 represents a 16.7x multiple of 2016’s adjusted earnings-per-share of $4.32.

The following diagram compares today’s valuation against the historical valuations of Cardinal Health. 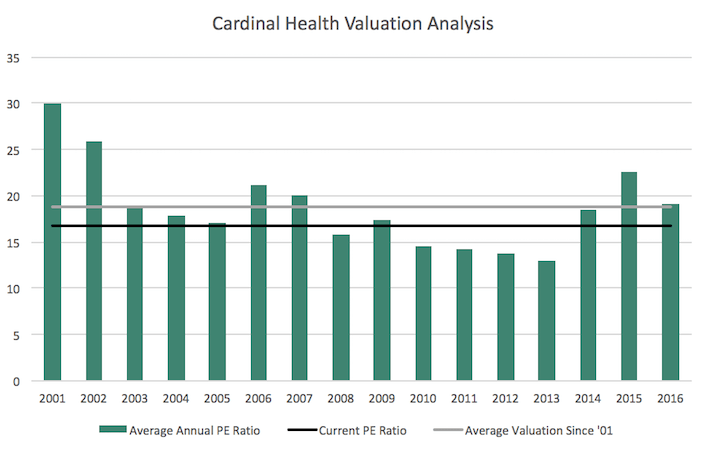 Investors will also benefit from the company’s above-average dividend yield. Cardinal Health’s most recent quarterly dividend payment was in the amount of $0.4489 per share, or $1.7956 annually. Today’s price of $72.45 represents a forward dividend yield of 2.5%, which is above the S&P 500’s dividend yield of ~2.0%. 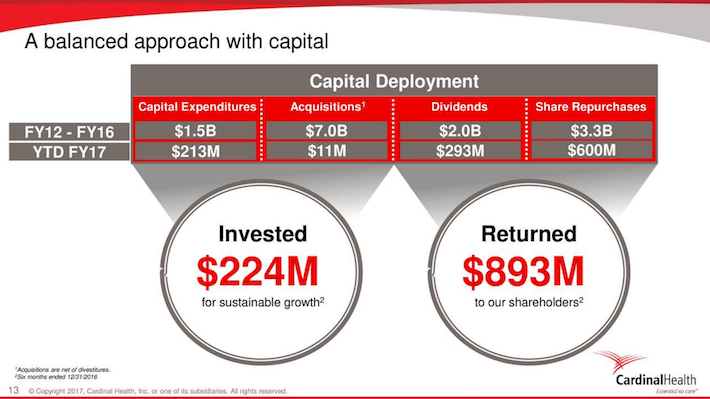 The company’s consistent dividend increases and share repurchases are key signs of a shareholder-friendly stock.

To summarize, Cardinal Health’s total returns will be driven by:

For expected total returns in the range of 10.5%-14.5% over the long run. It is likely that these returns will be boosted by valuation expansions once the uncertainty surrounding the acquisition and reduced guidance is digested by the markets.

One of the best time to buy a stock is when negative news creates an irrational decline in stock price.

“The best thing that happens to us is when a great company gets into temporary trouble…We want to buy them when they’re on the operating table.” – Warren Buffett

Fortunately for Cardinal Health’s shareholders, the company is definitely not “on the operating table”.

Cardinal Health was already a buy before today’s price decline. The company’s investment prospects are even more compelling after today’s price action.

If you are interested in reading more about the long-term investment prospects fo Cardinal Health, the following Sure Dividend articles may be of interest:

Article by by Nicholas McCullum, Sure Dividend