As reported by Chain Reaction Research, JBS SA, the world’s biggest meatpacking company, halted beef production at all but three of its 36 plants in Brazil last week as federal police released results from their two-year investigation of pork, poultry and beef meatpackers. They found that health inspectors and politicians took bribes to allow domestic and international sales of rotten meats. Countries around the world responded by ceasing imports of Brazilian meats. Markets were down about 20 percent on the news.

JBS also is caught in a second scandal as Ibama, Brazil’s environmental protection agency, raided JBS meatpackers in Redenção and Santana do Araguaia, in the state of Pará last week. Ibama’s raid identified 59,000 cattle sourced from land deforested illegally. This illegal deforested land equals the size of Manhattan – roughly 200 square miles. JBS sourced 90 percent of the animals from this illegally deforested land. In 2014, Brazil’s National Institute for Space Research reported that cattle ranching caused 65 percent of deforestation in the Amazon. In 2012, Tesco canceled its contract with JBS after JBS sold deforestation-linked beef to Tesco. 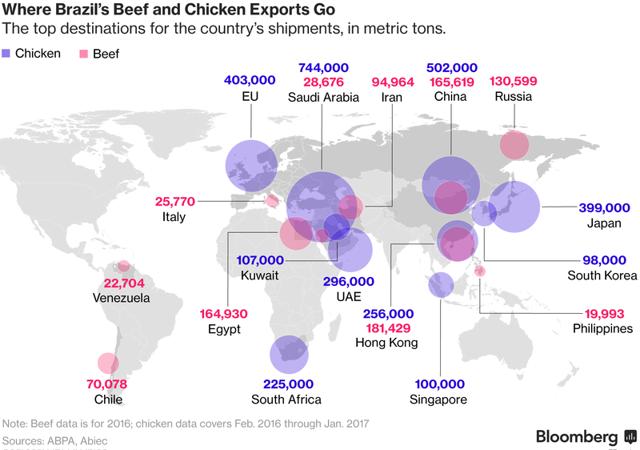 JBS’s initial public offering ( IPO) on the NYSE as JBS Foods International was expected in May or June at a value of USD one billion. JBS sells its meat products under the brands Swift, Friboi, Seara, Pilgrim’s Pride, Gold Kist Farms, Pierce, 1855, Primo and Beehive.

BRF’s potential USD 1.5 billion IPO plans for its halal One Foods Holdings Inc. was also rocked by the news. Morgan Stanley & Co. and Bank of America Corp are advising the potential BRF London IPO. One Foods has 45 percent market share in the poultry sector in Saudi Arabia, United Arab Emirates, Kuwait, Qatar and Oman. BRF is now mulling canceling the IPO. Instead they have started talks for a private stake sale to sovereign wealth and buyout funds

If they go forward, JBS and BRF’s combined IPO’s could bring USD 2.5 billion to the Brazilian economy.

China, Japan, the European Union, Argentina, Chile, and Mexico are just some of the countries to ban Brazilian meat imports. This has led to hundreds of tons of meat stranded at sea on commercial vessels prevented from offloading their products.

The crisis destroyed about one-fifth of the market value of the Brazilian meatpackers markets last week. JBS and BRF lead Brazil’s export market, which shipped USD 5.9 billion worth of poultry and USD 4.3 billion worth of beef in 2015. Some markets have recovered since given post-crises assurances.

Brazilian meat exports fell from a daily average of USD 63 million to USD 74,000 by March 21 of this year. JBS and BRF’s equity value decreased by over USD 2.2 billion over the same period.

As of March 27, China had lifted its ban of Brazilian beef imports. As of March 29, Brazilian government officials had closed six meatpacking plants while banning 15 others from the export market.

On March 29, Wolf Haldenstein Adler Freeman & Herz LLP launched a securities class action lawsuit against JBS in the Eastern District of Pennsylvania. The lawsuit is on behalf of shareholders who purchased JBS American Depositary Receipts between June 2, 2015, and March 17, 2017. The lawsuit alleges that JBS executives bribed regulators and politicians to hide rotten meat and plants with traces of salmonella. This means that JBS may have produced materially false and misleading financial statements.

Cattle Ranching #1 Cause of Deforestation

According to Chain Reaction Research’s 2016 report E conomic Drivers of Deforestation: Sectors exposed to sustainability and financial risks, over 70 percent of combined deforestation is linked to cattle ranching in Brazil, Colombia, Ecuador and Peru. Brazil’s annual forest loss was 984,000 hectare (HA) per year 2010-2015.

Cattle herding is often the first economic activity to use newly deforested areas. In South America, pasture for livestock is a primary driver of forest loss. Previously cleared land gains value and is later sold to soy farmers. This leads to new forests cleared for cattle as livestock farmers seek new pastures.

Brazil has the largest commercial cattle herd in the world and the highest beef production of the Amazon countries. Beef production is forecast to increase in 2016, driven by higher export demand and depreciation of the Brazilian currency. In 2015, beef production reached 9.4 million metric tons, a large increase over the previous decade. Of that total, 21 percent was destined for exports. Cattle herding accounted for more than 80 percent of deforestation in Brazil between 1990 and 2005.

By late 2016, only a handful of ranchers, whose combined holdings represent less than one percent of Brazil’s pastureland, had received certification to the Sustainable Agriculture Network beef products “chain of custody” mechanism.