One of the things we learned when oil collapsed a couple of years ago—something I’ve written about previously—was that there was a positive feedback loop embedded in declining oil prices.

Basic economic theory would tell you that as the price declines, so does oil supply. But the opposite turned out to be true. The price went down, and people pumped more!

Take a look at a chart of WTI. 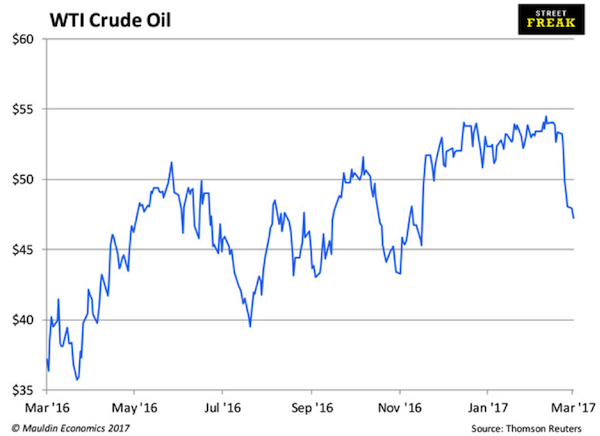 See how oil takes a while to go up, but goes down in a hurry? Traders call this “going up on an escalator, down on an elevator.”

But this isn’t usually the case with commodities. The high-velocity move tends to be to the upside—especially given geopolitical risks. Iran does something bad, and the price of oil gaps up three bucks.

The Price Action Has Totally Reversed

Oil has been in a bear market for a while now, and just because it bounced from the panic lows does not mean that the bear market is over.

Back to oil. We literally have it coming out of every orifice because of human ingenuity. Because of one very simple invention: learning how to drill sideways.

Do you remember your elementary school textbooks that said the world would pretty much be out of oil by the 2000s? That we only had 20–30 years left? Those textbooks told me we would run out of oil in our lifetime.

Now we have a few hundred years’ worth. My guess is that it will last longer than that. As for alternative energy, we will use it when it gets cheaper than fossil fuels and not a moment sooner.

I have no position in oil, but on balance, my portfolio stands to gain if it declines further.

Gasoline is cheaper than water. Does that make you mad? It shouldn’t. It should make you stand there, mouth wide open, and gawk at the miracles of capitalism.

Grab the Exclusive Special Report, The Return of Inflation: How to Play the Bond Bear Market, from a Former Lehman Brothers Trader

Don’t miss out on this opportunity to cash in on the coming inflation.

Jared Dillian, the former head of Lehman Brothers’ ETF trading desk, reveals why inflationary price increases could be much higher than 1% or 2% and how you can position yourself for big profits as the bond market falls.