John Bogle is an investing legend. He is the founder of Vanguard Group, a $3 trillion dollar mutual fund powerhouse. Vanguard is credited for single handedly rolling out the first index mutual fund in 1976. It gave millions of investors around the world the opportunity to invest at a low cost.

I have read several of his books, and really enjoyed his simple messages. I really liked Bogle’s message on keeping costs low, keeping turnover low, staying the course and keeping it simple. I liked the advice the minute I read it.

It makes sense that when you do not pay 1%/year to a greedy asset manager, you have more money working for you.

I have been inspired by Bogle to find a way to educate investors and help them get their fair share of returns. For example, building a diversified portfolio of dividend companies will only cost a one time brokerage fee. This means that the investor’s only cost is to buy the diversified list of blue chip stocks for their portfolio. Their job is to then remain patiently invested. That way, they will not have to pay an annual fee for the privilege of someone else picking well-known companies for their portfolios. After all, I do not need to someone else to buy Johnson & Johnson with my money, and charge me an annual fee in the process. This is a well-known business.

I especially liked Bogle’s advice on dividends. In his books, he discusses how share returns are dependent in three factors:

Using the current data of 2% dividend yields, a 4% annual corporate profits, Bogle expects low returns over the next decade. Bogle believes that valuation matters, as a tool to avoid massively overpaying for your investments, not as a tool to time markets.

I recently saw an interview with him on the merits of living off dividends in retirement. Bogle is an advocate of focusing on the dividend payments, and ignoring stock price fluctuations. He points out that the stock market is a giant distraction, and that the investors should keep an eye on the dividends, while ignoring stock prices. This has been the message on this site since we launched in 2008.

“Bogle: You’re right, and that’s why I’m on this pretty much one-man, I think, crusade to have people, particularly retired people, look not at the value of their portfolio, but at the income stream they get. They’re going to go out to the mailbox and they’re going to open, let’s say, the middle of every month when the fund or group of funds pays their dividends. They’re going to get a certain dividend. Dividends are what matter to these people. The stream of income is what matters, and dividends [tend to increase] in history. There have only been a couple of serious drops in the dividends in the Standard & Poor’s 500.

Bogle: 2008 was one, and you could argue it’s going to happen again and again. But that was when basically the financial system eliminated its dividends, and we’re back at the higher level right now. You took like a probably 20% drop in you income–I think, is about the right number–and we’re back above that level now.

Look at the dividend and try to ignore the market. As I’ve often said–nothing like quoting oneself, Christine–the stock market is a giant distraction to the business of indexing, and in particular for the business of retirement investor. It’s the income flow from Social Security, pensions, whatever it might be, and dividend income, and that’s what’s important. It’s amazing how this dividend line [tends to increase over time] and the market [goes up and down over time], but they track each other in the long run.”

He also correctly points out that dividends have a smooth uptrend over time. This makes dividends an ideal source of dependable income for retirees. Share prices on the other hand are much more volatile. This is why it makes sense for retirees to focus on the income from that portfolio.

Bogle also mentions that while dividends are not guaranteed, they have only gone down more noticeably only a couple of times in the past.

In contrast, share prices fluctuate greatly, since they are driven by the animal spirits of investor fear and greed. Stock crashes of 20% occur very frequently. There have been only a few instances where annual dividend payments on S&P 500 have fallen by more than 10%. This statistic is lost for the vast majority of investors out there unfortunately. I have been involved in numerous conversations where someone would point out that dividends were cut in 2008 – 2009, as if that makes dividend investing risky. However, these people forget that dividends increased in 90% of years. By focusing on isolated events, these people end up missing the forest for the trees.

Dividends are more stable than stock prices, follow a general smooth uptrend, and provide a source of income that historically has grown faster than inflation. This is why Bogle tells investors to ignore stock prices, and focus on dividends. 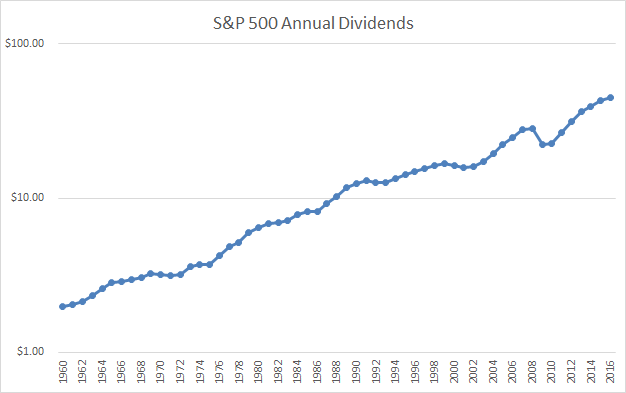 Ironically, there are some investors who claim to be fans of Bogle, who actually believe that dividends do not matter. For some strange reason, Bogle’s message has been corrupted for these inexperienced investors. I wonder if they merely try to associate themselves with Bogle’s name, in order to promote their own businesses.

When I read his book ” Bogle on Mutual Funds“, I found a lot of interesting ideas about investing. Many of these ideas have inspired me in educating investors on the Dividend Growth Investor website since 2008. Some of his quotes are listed below:

” what is truly remarkable is that the record of dividend payments by US corporations heavily favors rising dividends over declining dividends, almost irrespective of prevailing business conditions. ”

“Dividends nicely exceeded inflation at a rate of 1.4%/year.”

“Even when a company does not pay a dividend, investors implicitly value the firms stock based on the presumption of future dividends”

I really love his overall message on staying the course, focusing on dividends, keeping investment costs low, and ignoring stock prices. He also believes in keeping things simple. Bogle is against the widespread practice today of building portfolios that consist of 10-15 asset classes, whose sole purpose is to create complexity to generate fees for greedy asset managers. Keeping it simple means owning stocks and some bonds. It also means not getting too fancy and too carried away by adding fashionable asset classes whose merits are derived from a backtested computer model.

Bogle also does not believe that adding international stocks to a portfolio will provide any incremental benefits to investors. He correctly points out that US corporations already generate a large portion of revenues and profits from their international operations. Therefore, adding international stocks is a little overkill. He also believes in placing bets based on what he knows, and that the US has some of the best investor protections and legal institutions. This has been one of the inspirations for this post from 2008 titled: “International Over Diversification”