By financing the massive expansion of the palm oil sector, banks are contributing to deforestation, peat development and social conflicts. Analysis of bank financing – both loans and equity and debt underwriting – of 16 major palm oil companies from 2006-2015 shows that banks are more important financiers than equity and debt investors. This means that investors in these banks also are exposed indirectly to sustainability risks. The adoption of no deforestation policies by banks has an impact, but too many banks have not yet adopted such policies.

Banks play an important role in financing the expansion of the oil palm sector. Significant funds are needed to develop land, to plant seedlings and to build infrastructure, while oil palm trees only start to bear fruit after three-to-five years and only reach peak production after seven years. Upfront financing is therefore required.

The objective of this research is to analyze how these different developments have impacted the role of banks in financing this sector. Based on three criteria, 16 palm oil companies were selected. The criteria are: total assets, market capitalization and land bank size. For these 16 companies, all new loans and stock issuances during the past ten years (2006-2015) were analyzed. The figures in this study refer to new loans and underwriting services attracted each year.

Overall, the selected oil palm companies attracted more loans, issued more bonds and issued less shares in the period from 2006-2015. From 2006-2015, the annual volume of loans provided to the selected companies increased from USD 226 million to USD 2,321 million, with an average growth of 78 percent per year. As most loans are multi-annual, years in which the new loan volumes peak are followed by years with lower volumes in which the companies need less loans. 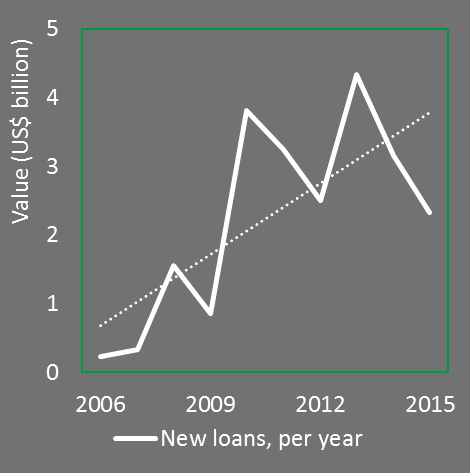 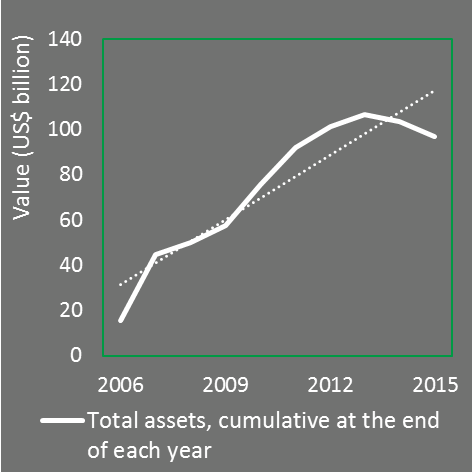 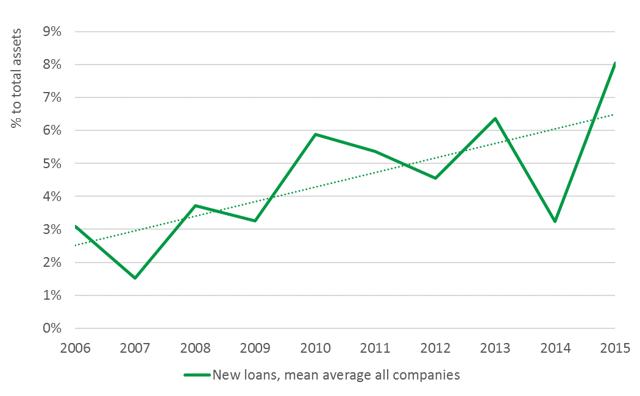 Figure 4 below looks at the trend for the individual companies, which are getting more dependent on loans, as they saw an increase in the percentage of new loans relative to their total assets. 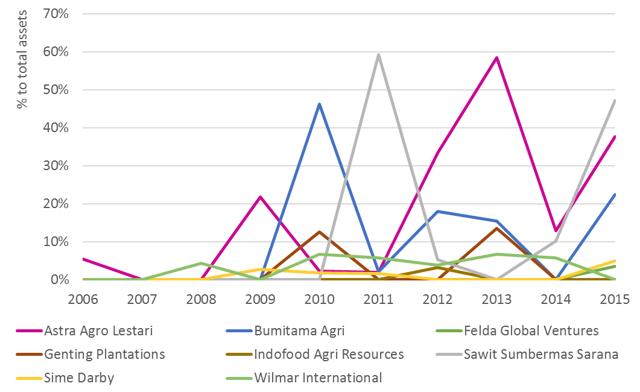 Figure 4: Companies with a Growing Percentage of Loans to Total Assets, 2006-2015

Figure 5 below looks at the companies that attracted less bank loans over the years. Partially this can be explained by the fact that some of these companies attracted more bonds (see Figure 5). 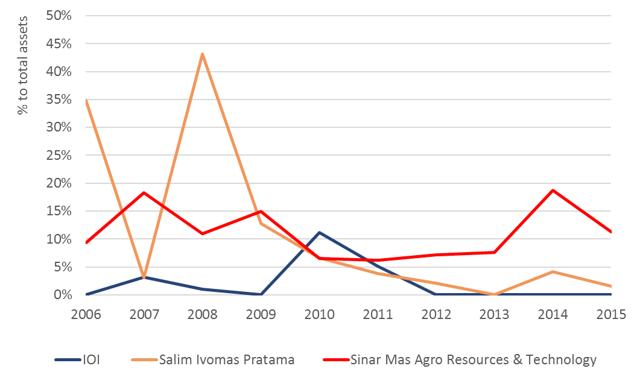 Figure 5: Companies with Declining Percentage of Loans to Total Assets, 2006-2015

Apart from attracting bank loans, companies can also extract financing by issuing new bonds and shares. Share issuances were peaking in 2012, because Felda Global Ventures Holdings went public. This was the second-largest IPO worldwide in that year.

Figures 6 and 7 below shows how the development of the volume of new bond issuances relates to the growth of the companies themselves, measured in total assets. Both indicators show an increasing trend, but the bond volume grows stronger. As a result, the volume of new bond issuances as percentage of total assets increased from around 1.4 percent to about 2.1 percent. Bond financing is thus getting more important, but does not follow the same strong growth as new loans (Figure 3). 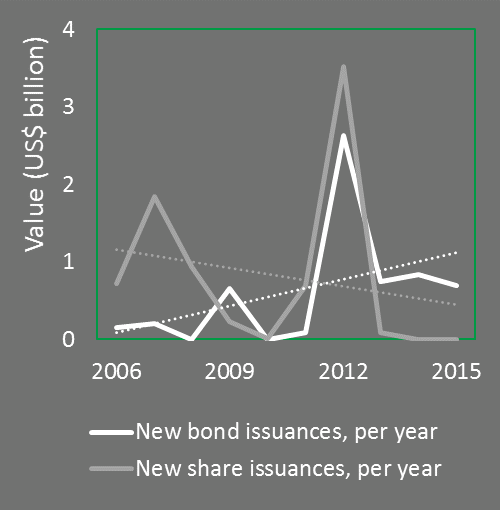 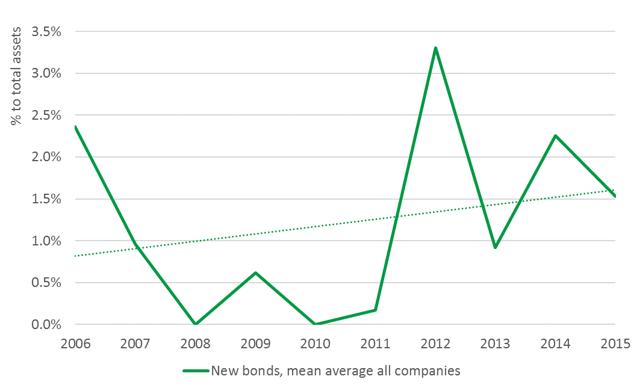 Figure 8 looks at the trend for the individual companies which are getting more dependent on bonds, as they saw an increase in the percentage of new bond issuances relative to their total assets. 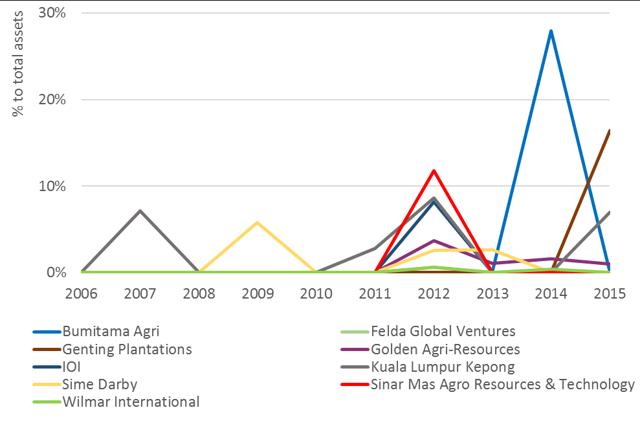 Figure 8: Companies with a Growing Percentage of Bond Issuance to Total Assets, 2006-2015

Sinar Mas Agro Resources & Technology is an example of a company replacing loans by bonds, as the company dropped from a 18 percent to a 7 percent ratio of loans to total assets from 2007-2012 (see Figure 5), while at the same time in 2012 bond issuances accounted for 12 percent of the company’s assets. 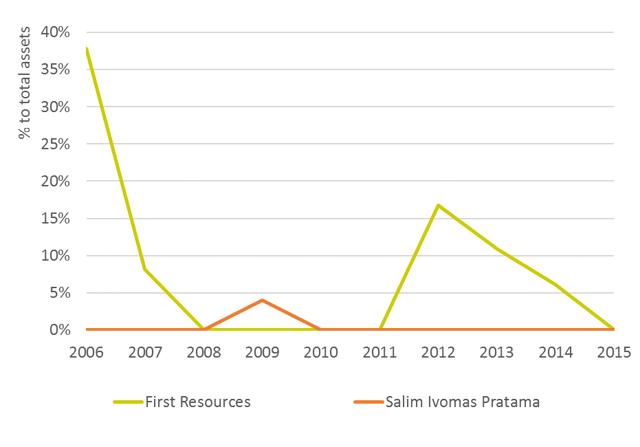 Figure 9: Companies with a Declining Percentage of Bond Issuance to Total Assets, 2006-2015 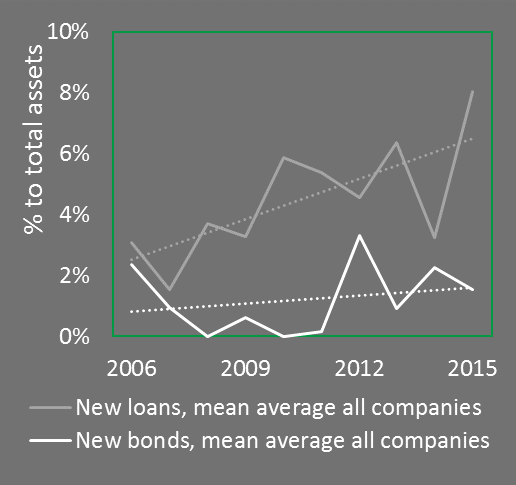 Banks providing loans and underwriting services were grouped based on their region of origin. The six regions used are:

As shown below in Figures 11 and 12, domestic banks from SE Asia were most important in financing palm oil companies in the period 2006-2015, closely followed by East Asian and European banks. Banks from North America, Australia and other regions play a smaller role. Banks from different regions seem to respond similarly to upward and downward changes in the market. 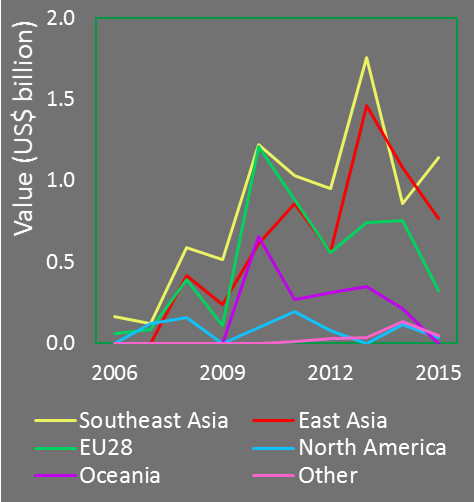 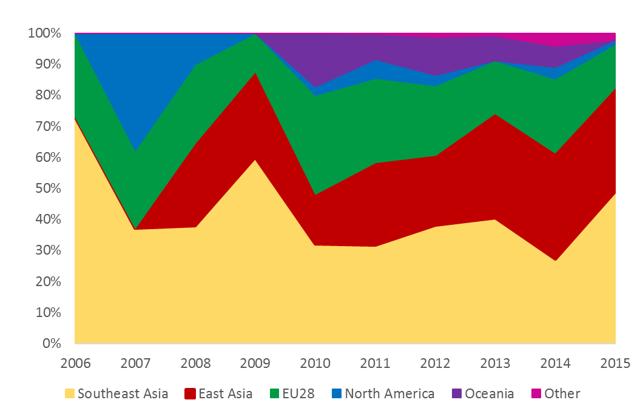 As shown below in Figure 13, loans provided by the top-15 banks account for 72 percent of the total loans provided to the 16 selected oil palm companies. In the period from 2006-2015, 11 percent of all loans to the 16 companies were provided by Oversea-Chinese Banking Corporation (Singapore). Other important banks were Mitsubishi (Japan), Sumitomo (Japan), HSBC (United Kingdom), DBS (Singapore) and Mizuho (Japan). As these banks are listed on a stock exchange, investors in these banks are exposed indirectly to the sustainability risks of the palm oil sector. 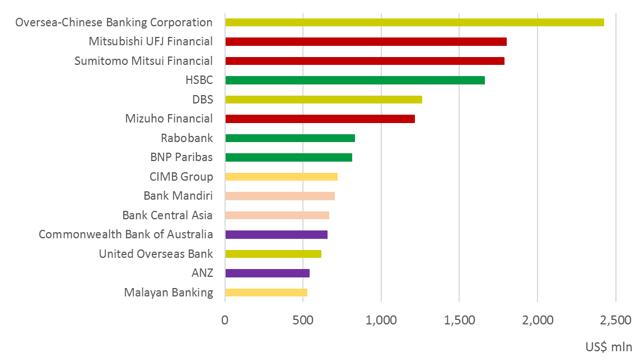 As shown below in Figure 14, underwriting services provided by the top-15 banks account for 88 percent of the total provided to the 16 selected oil palm companies 2006-2015. Underwriting of bond and share issuances is dominated by Malaysian investment banks (CIMB, Malayan Banking and RHB) and American investment banks (Citi, JPMorgan Chase, Morgan Stanley and the American subsidiaries of Credit Suisse and Deutsche). As these banks are listed on a stock exchange, investors in these banks are exposed indirectly to the sustainability risks of the palm oil sector. In contrast to their Malaysian counterparts, Indonesian banks do not play a relevant role in underwriting. This reflects a stronger development of the domestic capital market in Malaysia. 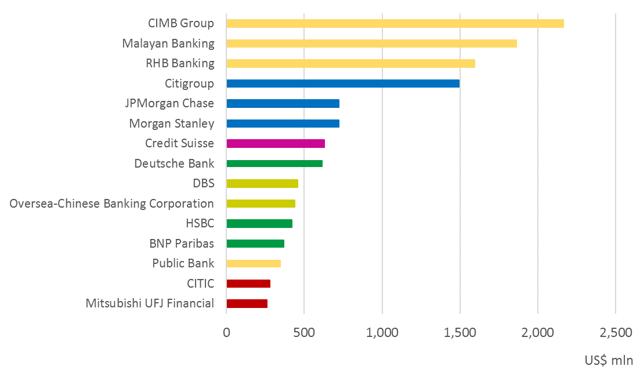 For the main banks providing loans and underwriting issuances, we analyzed if the quality of their ESG policies on the oil palm sector had a significant influence on their financing activities in the period 2010-2015. We used the policy scores assigned to the banks on the Forests and Finance website and grouped the banks in three groups, based on their scores. This is shown below in Figure 19.

*The bank profile of BNP Paribas was not provided by the Forests and Finance website. It was assessed following the same methodology.

Policy scores are summed and ranked from zero – the lowest – to 30 – the highest. Rabobank scored highest at 23, followed by BNP Paribas at 21. Meanwhile, Bank Mandiri, CIMB Group, Malayan Banking and RHB Banking scored lowest at zero.

The Forests and Finance criteria for bank policy evaluation are:

Of the 17 most important banks, only 3 have adopted strong ESG policies on this sector. Another 7 have a policy which needs further improvement, while 7 banks have a very weak policy or no policy at all. Figure 13 below shows that possibly the stronger the ESG policies banks have covering their lending activities, the more their loan portfolio seems to focus on companies which improved their sustainability performance, 2010-2015. These banks appear to be executing upon their ESG policies and putting them into practice. Banks with good policies (scored higher than 20), did not provide any loans to the stable companies. Stable companies did not issue bonds in this period and there was only one case where a bank with a good policy underwrote a share issuance of a stable company (BNP Paribas and Sawit Sumbermas Sarana). 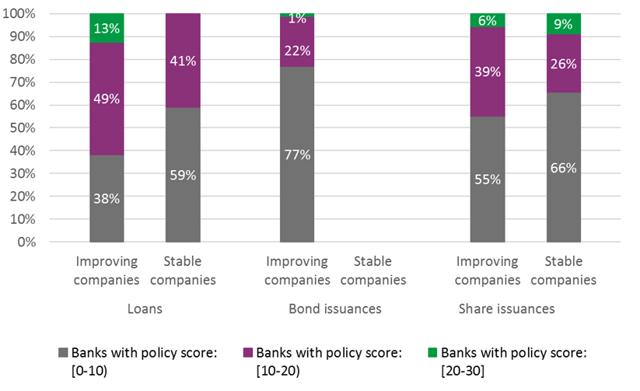 Disclaimer: This report and the information therein is derived from selected public sources. Chain Reaction Research is an unincorporated project of Aidenvironment, Climate Advisers and Profundo (individually and together, the “Sponsors”). The Sponsors believe the information in this report comes from reliable sources, but they do not guarantee the accuracy or completeness of this information, which is subject to change without notice, and nothing in this document shall be construed as such a guarantee. The statements reflect the current judgment of the authors of the relevant articles or features, and do not necessarily reflect the opinion of the Sponsors. The Sponsors disclaim any liability, joint or severable, arising from use of this document and its contents. Nothing herein shall constitute or be construed as an offering of financial instruments or as investment advice or recommendations by the Sponsors of an investment or other strategy (e.g., whether or not to “buy”, “sell”, or “hold” an investment). Employees of the Sponsors may hold positions in the companies, projects or investments covered by this report. No aspect of this report is based on the consideration of an investor or potential investor’s individual circumstances. You should determine on your own whether you agree with the content of this document and any information or data provided by the Sponsors.