Globalization and immigration drummed up lots of interest during the presidential election, but healthcare may be the bigger issue facing America.

Since 2001, health insurance costs have shot up 114%. The average premium for a family now exceeds $18k per year. That’s up $1,300 since 2014. For most people, an employer covers a large share of plan costs. Still, the burden for households is growing.

The rise of deductibles (or the amount the insured must pay before coverage kicks in) has outpaced that of health care itself. Today, 51% of Americans have deductibles above $1,000—a 49% surge since 2014. No wonder medical bills are the top cause of bankruptcy.

From 2007–2014, middle-income households’ spending on health care increased by 25%. In the same period, spending on all other basic needs (like food and clothing) fell.

With economic growth trending upward this year, the fever in healthcare costs looks likely to pick up pace. However, this is just a symptom of larger problems facing America.

For almost four decades, healthcare costs have grown faster than wages. A major culprit behind wage stagnation has been the ballooning cost of non-wage compensation, which includes benefits like health care. Since 1979, real wages have grown a measly 2.7%, while health care rocketed 10-fold and total employee compensation rose 63%.

Healthcare costs have inflated, in part, from a lack of competition… and it’s set to get worse. The Affordable Care Act (ACA) forces insurers to accept patients regardless of medical history or risk profile, and that is a big reason insurers are pulling out of markets.

This year one-third of all US counties will have only one insurer. Which leads us to the next issue… excessive regulation.

The Code of Federal Regulations—the codex of all Federal rules and regulations—has bloated eight-fold over the past 55 years. The fallout? Since 1970, the number of doctors has barely doubled while the ranks of “administrative employees” have shot up 3000%.

Another problem is America’s aging population. In 2000, the number of Americans over the age of 65 was 35 million. In 2030, it will be around 72 million. Generally, the older you are, the bigger the health risk you carry. With more elderly people entering the system and inflating premiums, young people are less willing to sign up because of the expense.

With these trends in motion, the risk pool will soon be filled with costly patients. Clearly, an insurance system cannot function when this happens. With quick fixes unlikely, what risks does this pose to ordinary Americans?

A recent survey from The Kaiser Foundation found that 63% of respondents had used most or all of their savings just to pay medical bills. The average family now spends 35% of its disposable income on health care. Here’s a real-life example taken from a Health Affairs study.

A family of four living in Roanoke, Virginia, with an income of $60,000 in 2016 would have a premium payment of $4,980 for the year for the second lowest-cost silver plan. That plan has a $5,000 deductible. That means the family could spend almost one-sixth of their pre-tax income on health costs before they received any insurance payment.

This family has another option. They can opt out of coverage and pay a penalty tax of around $725. In 2015, about 7.5 million Americans took this option… a telling number. The rising costs of coverage have hit the middle-class hard. Most Americans earn too much money to qualify for subsidies but not enough to absorb the higher premiums.

With insurance premiums set to rise another 22% this year, even more people will be forced to opt out. Ascending healthcare costs have eroded the finances of many Americans, but opting out is a risky move. Given that 52% of families have less than $1,000 in savings, a minor injury can mean serious trouble for a family.

For those in the system, appointment waiting times are growing, while the scope of coverage shrinks. Long lines at the supermarket are annoying, but in healthcare, they can be fatal.

While private costs are growing, public spending has headed skyward. Currently, health care accounts for 17% of GDP and is expected to hit 25% by 2030. Clearly, something has to give… either services will be cut, or taxes will rise.

Soaring costs are also affecting the labor market. Affordable Care Act mandates that are due to take effect this year will force firms with over 50 employees to provide all full-time staff with health care. This will discourage firms from hiring staff and expanding operations.

Having explored the inner workings of the failing healthcare system, how can investors profit from the current state of affairs?

The healthcare system is falling apart at the seams. However, growing reliance on the sector and Trump’s plan to ‘’repeal & replace’’ the ACA present investment opportunities for astute investors.

Healthcare was the worst performing S&P sector in 2016—but that doesn’t tell the full story. Pre-election, healthcare stocks (as a group) were down 4.9%. Post-election they were up 8.2%. While we don’t yet know the specifics of Trump’s plan, the market clearly likes the proposed regulatory cuts and the repeal of Obamacare.

Although healthcare is the second-best performing sector year-to-date (YTD), valuations are depressed. The sector’s forward price-to-earnings (P/E) ratio is 20% below its historical average. As a result, the sector is trading at a 15% discount to the S&P 500 Index.

Fidelity points out healthcare stocks haven’t been this undervalued relative to the market since 2008. 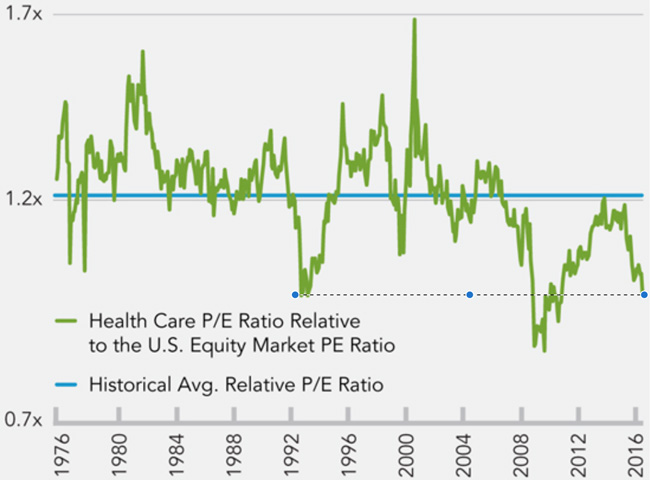 Current low valuations (plus the fact that healthcare is an unloved sector) make it a contrarian play for 2017. Contrarian value is one of the strategies we cover in our free report 3 Proven Strategies to Invest in Uncertain Markets Like These. In our free report, we detail three strategies investors can use to find value in today’s generally overpriced markets.

Before investors dive in, be aware that there is large divergence in performance within the healthcare sub-sectors. For example, healthcare equipment firms have outperformed biotech companies by 55% YTD. Given this, investors must do their due diligence before entering the space.

While the healthcare system is very frail, if Trump can successfully repeal the ACA, the growing reliance on it could be converted into higher revenues. This, coupled with lower costs from regulatory cuts, would be extremely positive.

In the meantime, the sector remains unloved and undervalued. As such, investors would be wise to follow Winston Churchill’s advice when he said, ‘’Never let a good crisis go to waste.’’

If you’re tired of being lied to by all those so-called “investment gurus” promising a sure-fire way to get 1,000% returns… but still need a system to safely get stock market returns…you need a copy of Garret/Galland Research’s latest free special report. Click here to learn more about this proven investing system that will change how you invest forev