Meet Reserve Bank of India, now these are early days and I was the sceptical one after Dr Rajan left but watch the behaviour of Indian Rupee as compared to other Emerging market currencies against dollar in last couple of months when almost every EM currency has come under pressure except Indian Rupee

The CPI released this week surprised on the lower side  as Consumer prices in India increased 3.17 percent year-on-year in January of 2017, easing from a 3.41 percent rise in December and below market expectations of 3.22 percent. It is the lowest inflation rate since the series begun due to a sharp slowdown in food prices

But Indian wholesale prices (WPI) rose 5.25 percent year-on-year in January of 2017, following a 3.39 percent gain in December while markets expected a 3.89 percent rise. It was the tenth straight month of increase and the highest since July 2014, driven by a faster increase in cost of manufactured product and a surge in cost of petrol while prices of food fell less than in the prior month. On a monthly basis, wholesale prices went up 1.0 percent, compared to a 0.2 percent fall in December. WPI inflation came as a surprise to the market and vindicated RBI stance of keeping interest rate unchanged ( as per reuters poll 46 economist expected rate cut in this policy) and shifting bias to neutral from accomodative.

Rising WPI is a cause of concern because pricing pressure first comes out at wholesale level and then at retail level. so, we can safely say WPI is a leading indicator and CPI is a lagging indicator. 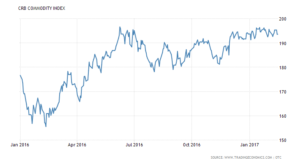 CRB index is up 20% in last one year but we dont see this kind of movement in domestic prices simply because in absence of demand ,companies were absorbing this cost by increasing the productivity .Demonetisation hit perishable commodities so bad that in absence of hard cash with traders , farmers had to sell their produce at throw away prices leading to collapse in food inflation. I think companies will not be able to absorb anymore raw materials price hikes as it will start impacting the margins and will start increasing the output prices . With return of hard cash ,agri inflation will catch up  http://worldoutofwhack.com/2017/02/06/global-food-prices-on-a-sprint-up-16-in-last-one-year-diverge-from-indian-prices/ to global prices.

The single biggest beneficiary of RBI policy is Indian Rupee and if you are miffed that your home EMI is not going to come down further , dont blame the central bank, it is in the hand of your own bank (better banking cartel) or better enjoy a vacation with Egyptian Mummies. One Egyptian pound (currency of Egypt ) today equals 4 Indian rupee whereas just a year back 1 egyptian pound equalled 9 INR. So INR has appreciated more than 50% against Egyptian pound and consequently your egyptian vacation should be 50% cheaper.

This is what happens (Egypt)when inflation is left unchecked , central bank is BEHIND THE CURVE and listens to economist and political masters.