The charts which makes India a darling of emerging market investor 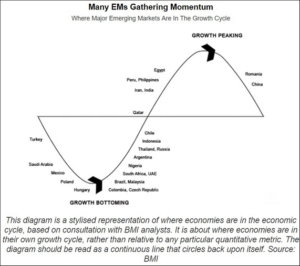 India is somewhere in the cycle where growth will probably be picking up along with host of other emerging economies like Iran,Peru,Egypt etc.Institutional investors like big and deep capital markets with diverse sectors to invest which only India can give. I would have added Iran to this but Trump administration is making investors nervous about investing in Iran 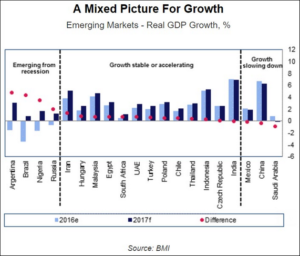 One more chart showing that china is slowing, mexico is out and saudi arabia does not know how to run an economy where budget is made with assumption that oil will remain at USD 80+ FOR ETERNITY. You get my point, why India stands out is that it might be taking time to get our act together but at least are not doing anything wrong. 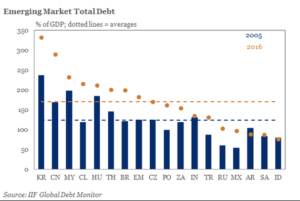 Boy o boy see the debt ( government+private) buildup in some of these emerging countries and they also have huge buildup of dollar denoinated debt. Rising dollar interest rates is not good for growth and in absence of growth some of these countries will face high inflation along with devaluation of their currencies. Again India has not done too badly and debt has remained constant although over last 10 years it is corporate India which has gone on borrowing binge and government borrowing has been controlled .

India is well placed among emerging market peer. A prudent central bank by not cutting interest rates has made India more attractive destination. I wish we could take their investment in real economy which creates real jobs than capital markets , a model championed by china.