China is showing desperation and has called all Bitcoin exchanges to a closed door meeting looking to shut down the flight of capital from China ( honestly can you think of Indians buying bitcoin to get rid of rupee?)

and this is what happens to Bitcoin 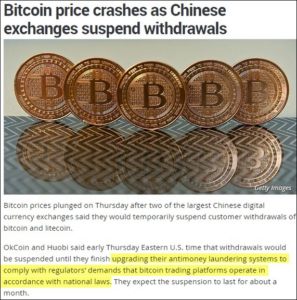 China is looking to deal with the expected trade confrontation with Trump and looking to shut down the flow of capital that has been putting a downward pressure on their currency. 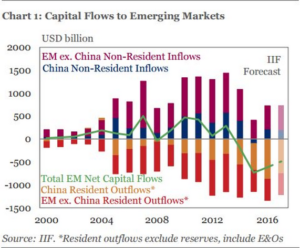 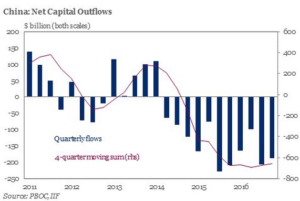 Martin Armstrong writes that China is trying to curb the flight of capital which has contributed to the greenback’s rise for 35 months. However, with Europe tottering on the edge, the next country to withdraw from the EU may set off a collapse of the euro and that will only cause a surge higher yet in the dollar impacting China negatively with regard to trade disputes.

china is between rock and hard place. if they tighten the policy to prevent yuan depreciation domestic economy suffers, if they allow the currency to depreciate Trump will hit them with Trade protectionism.