A curious trend is underway in what might be called a forgotten indicator in China.  If you recall the so-called “Li Keqiang Index” it was comprised of 3 things: bank loans, power consumption, and rail freight.  I was looking through data on trade activity, particularly exports, for China (which I forecast to improve, potentially dramatically, in 2017 in the latest edition of theWeekly Macro Themes), and I noticed that rail freight has begun to rebound.  The latest numbers show rail freight up 9.8% y/y in December (compares to -8.3% this time last year). 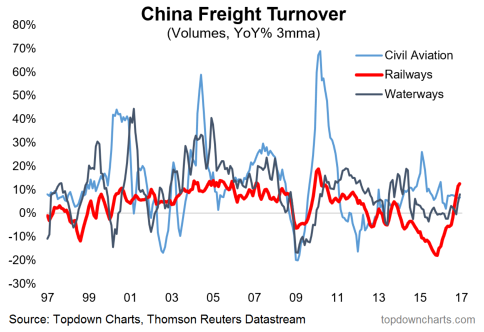 To be fair, Chinese rail freight has yet to recover to the high point in 2013, but is now only 10% off the high point vs 33% at the worst point (February this year).  For completeness, it’s now up 34% off the low point, albeit the low point was accentuated to the downside due to Chinese New Year distortions… vs the Q1 avg it was up 20% in December.  No matter how you cut it the bottom line is that Chinese rail freight has made a sharp andremarkable turnaroundas you can see in the chart.
Here’s where I show my ignorance: I don’t know if this is domestic-driven or export-driven. The reason I say that is that a major part of the much hyped OBOR (One Belt One Road) revival of the old silk road and the new maritime silk road is now up and running – in fact thefirst train from Yiwu(China’s east coast) arrived in London last week, and 2016 saw 1702 freight trains make the trip from China to Europe (more than double 2015).
The train trip takes about 2 weeks less than sea freight so it will help speed up trade. The OBOR has the potential to improve trade and economic development throughout

– at a time where America is pulling back and wheeling out protectionism. This theme will likely help China develop non-US trade.

So whether it’s the result of a surge in infrastructure spending (the other/domestic explanation) to offset cyclical and structural slowing of the economy, or whether it’s the result of the OBOR, China’s rail freight is recovering, and rapidly at that.  This is an important and positive data point in a sea of negativity that you often find around China macro and warrants monitoring.
Follow us on:
LinkedInhttps://www.linkedin.com/company/topdown-charts
Twitterhttp://www.twitter.com/topdowncharts