As we gear up for China’s Q4 data dump on Friday here’s a look at a few charts on China’s property market, updated with the latest data (December, just released). The average YoY% price gain of the 70 cities in the National Bureau of Statistics report was 10.5% in December 2016, more or less unchanged from November, and compares to an average gain of 0.2% in December 2015.  The turnaround in China’s property market has been dramatic, and has had a number of impacts on the Chinese economy, but there are signs that the current cycle may be topping out, and this will bring a fresh set of important implications for China (and no doubt, the rest of the world).

1.Property price gains hot but rolling over
The first chart shows the average annual gain across the 70 cities in the NBS report and the proportion of cities with positive YoY price gains. In the past the first sign of a maturing property price cycle is a topping out of the red line, which we are now seeing.  We’re also seeing a topping out of the average price gains.  Anecdotally, while monetary policy remains easy for now, there have been reports of selective macro-prudential and regulatory tightening moves, particularly in the larger cities.  So this is an evolving trend to keep on the risk radar as I’ll explain… 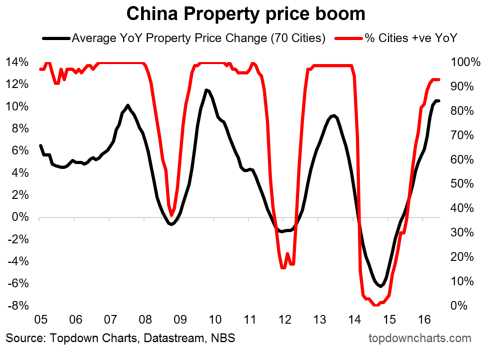 2. China: the consumer vs property prices
One implication of the rebound in property prices has been the recovery in consumer sentiment, as measured by the MNI consumer sentiment indicator. But check out the chart – the red line hasn’t moved anything close to the grey line.  It reflects a few things, first of all is the broad slow down in China’s economy in 2015-16, second much of the property price gains are in the larger cities, third worries about the Chinese yuan, fourth the stock market crash in 2015, and fifth the fact that at some point gains in property prices that exceed income growth become counter-productive to consumer confidence as prices get further out of reach. 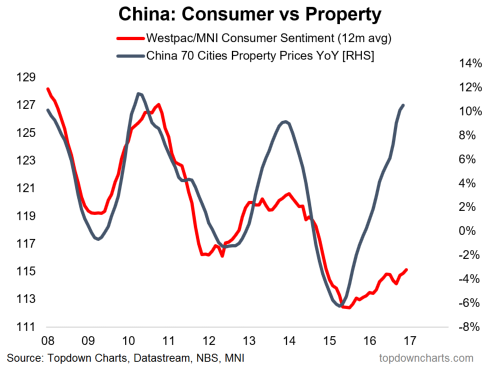 3. Property prices and the PPI rebound
One key impact of China’s property price rebound has been the rebound in producer prices. Now there are other drivers at play such as the weakening currency and rebounding commodity prices, but I would say that on both counts these are actually the product of what drove the price rebound i.e. forceful and coordinatedpolicy easing(monetary, fiscal, regulatory, and macro-prudential). As long as China’s property price gains persist we should see theupturn in PPI inflationpersist.  So if you see property prices turn down that could be a harbinger of another global deflationary impulse. 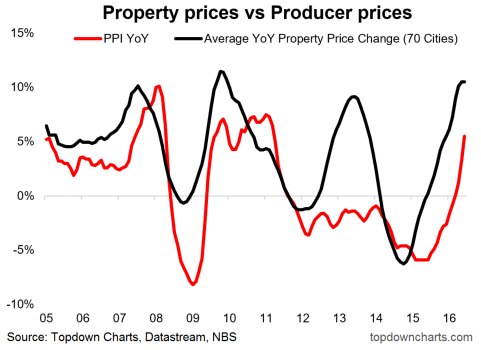 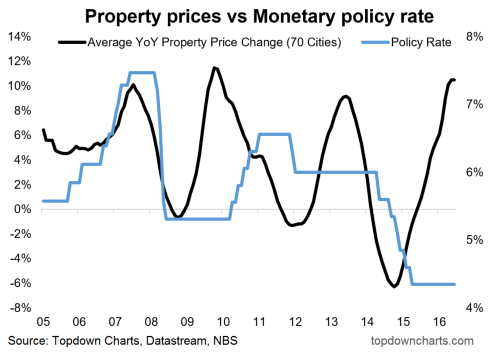 Property is a fundamental driver for China’s economy – a source of growth and a source of risks.  At present the property price cycle is in expansion mode thanks to previous policy stimulus, but there are signs of it topping out.  As discussed there is a key set of risks around this, so as I’ve said before – if you want to stay on top of China’s economy and the key risks there – just watch the property market!
Final thought:Watch out for theWeekly Macro Themesthis week as there will be a special China focus!
www.topdowncharts.com
Follow us on:
LinkedInhttps://www.linkedin.com/company/topdown-charts
Twitterhttp://ww w.twitter.com/topdowncharts