It’s quarterly report time for US stocks. If you just casually glance at the earnings news, you might think companies are having a great year. Many are beating expectations and reporting impressive revenues and profits.

The markets reward companies for meeting expectations (as we shall see below). But the reality is that the S&P 500 is on track for a sixth straight drop in year-over-year earnings.

How do companies keep continuing to beat expectations when earnings are falling?

Equity analysts are a big part of the problem. Their job should be getting those estimates right. They should not just take what are clearly suspect numbers from companies and plug them into their spreadsheets.

The chart below is from my friends at Ned Davis Research. It shows the consensus estimates for S&P 500 operating earnings when those estimates are first created and then what happens to the estimates over time. 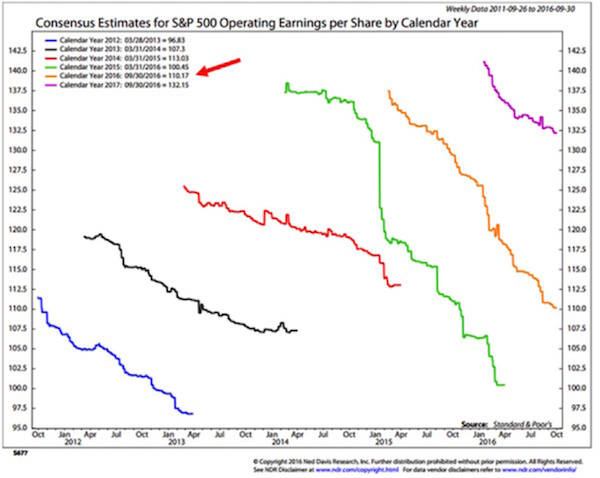 This chart starts with the year 2012, and there has not been one year since that has not seen a significant revision downward of earnings forecasts.

In 2015 (the green line if you are seeing this in color), consensus estimates went from an initial forecast of $137 to barely above $100 by the end of the year. That is a huge miss—over 30%.

But that dive didn’t dismay the analysts because they initially predicted roughly the same level of earnings for 2016. And as of September 30, it looked as though earnings are going to come in at roughly $110.

And these are operating earnings—you know, what I called EBIBS: Earnings Before Interest and Bad Stuff.

When bullish analysts talk about the price-to-earnings ratio (P/E ratio) being roughly 20 today, they are using operating earnings in their calculation.

If they used reported earnings, they would find that the P/E ratio is roughly 24, a 20% difference and certainly up in nosebleed territory. I should note that using the much more useful CAPE (the cyclically adjusted P/E ratio created by Professor Robert Shiller), today’s P/E is 26.79.

Digging a little farther, you find that analysts are projecting earnings to grow roughly 30% from where we sit today by the end of 2017.

It rather boggles the mind that people take these estimates seriously. But that is the problem. A very large number of people and market advisors do. That is why, of course, you hear that you’ve got to be bullish and stay in the market.

Because if earnings really do rise that much, a forecast of 2500 on the S&P is not unreasonable in this market environment. And so you get a lot of predictions of a big S&P 500 bull market in 2017.

Drink some Kool-Aid with us

It won’t be long before Barron’s puts out its annual forecast issue. It will be interesting to see just how bullish the estimate for the S&P will be. Just a wild guess from me, but I bet the consensus will be somewhere in the 2400 range.

It seems the Barron’s forecasters and the analysts running the S&P numbers are all drinking from the same well. That must be some mighty fine water.

FREE Report: How the High Priests of Economics Are Leading Us to Monetary Hell

Contrary to common belief, it’s not greedy Wall Street brokers that are wrecking the US economy—but academic policymakers like the ones employed by the Federal Reserve. And they all have the best intentions… Read financial-bestseller author John Mauldin’s riveting special report, How the High Priests of Economics Are Leading Us to Monetary Hell. Click here to get your free copy now.