Preliminary data from Markit’s Purchasing Managers’ Index (PMI) survey, released today, convey an overall positive picture for the Eurozone as a whole. The composite index rose (unexpectedly) to 54.1 from 53.3 in October. 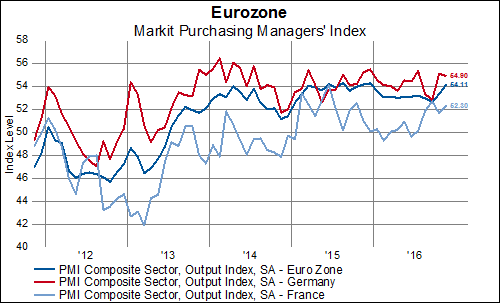 Eurozone PMI Manufacturing also rose unexpectedly (to 53.7 from 53.5, avoiding the anticipated decline to 53.3), in spite of small declines in both France and Germany. 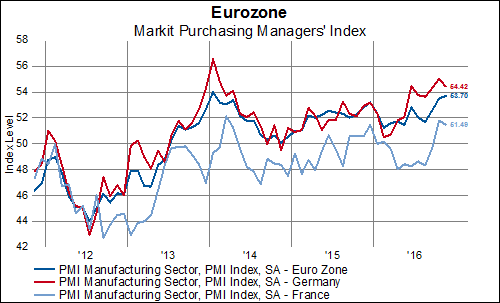 PMI Services was really the driver of the increase in the composite, however, as it rose to 54.1 from 52.8 in October. Data for Germany and France were consistently stronger here as well. 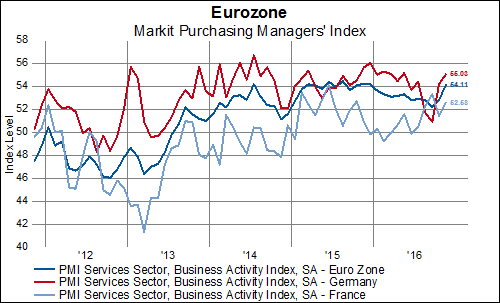 The improvement in these surveys hasn’t fully translated to better European equity performance, however. In spite of a short-lived, late-summer rally, DM EMEA stocks lag the MSCI World Index by nearly 10% year to date and are currently well below relative performance lows going back over the last decade. 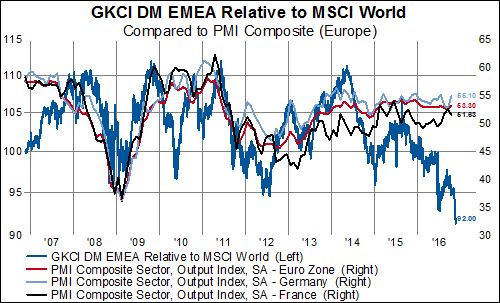 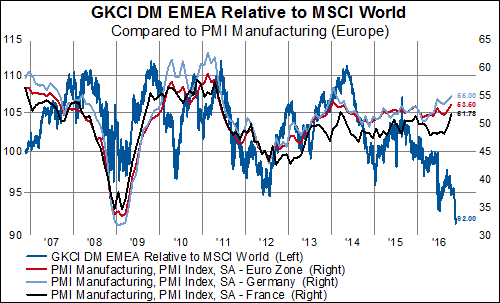 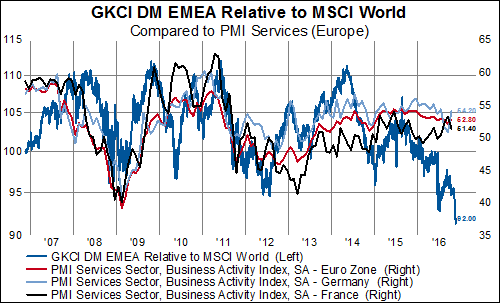 The question, then, becomes whether this divergence will resolve itself via relative equity performance improvements OR a downturn in PMI readings? For some potential clues, we take a look at our ‘baskets’ charts. Here, we divide stocks into broad groups of cyclicals (consisting of early, late, and hyper-cyclical sub-groups) and counter-cyclicals (where we further divide out the growth counter-cyclicals, made up of the health care and consumer staples sectors). We find that a great deal of DM EMEA’s overall relative underperformance can be attributed to a breakdown in more defensive, counter-cyclical stocks.

DM EMEA Cyclicals have underperformed the MSCI World Index by more than 20% over the last decade, but have managed to recover from early July lows and are now down less than 5% year to date. 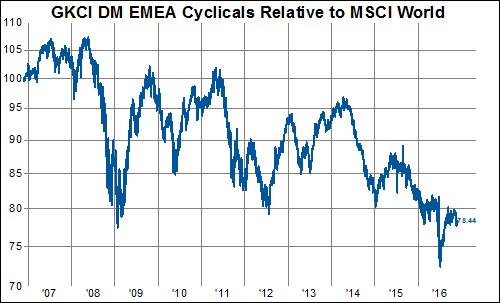 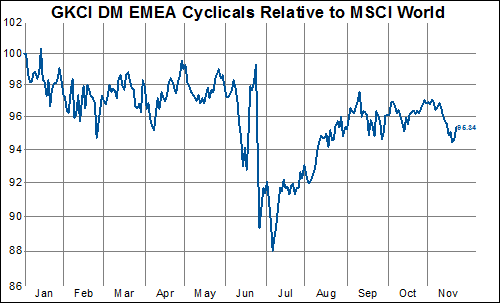 After a five-year run of outperformance, DM EMEA early cyclicals (consumer discretionary stocks) have languished since reaching relative highs late last year and have only managed a modest recovery from lows in July of this year. 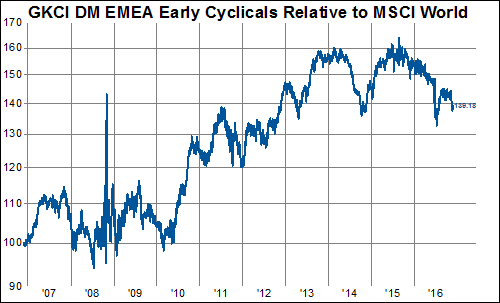 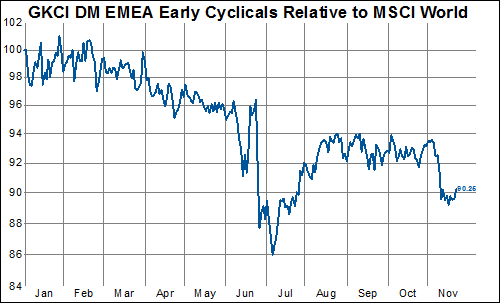 The financials and information technology sectors, as represented by the hyper cyclicals basket, have also underperformed the MSCI World over the last decade and continue to struggle through the year so far. 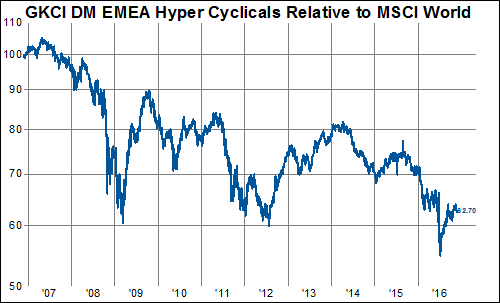 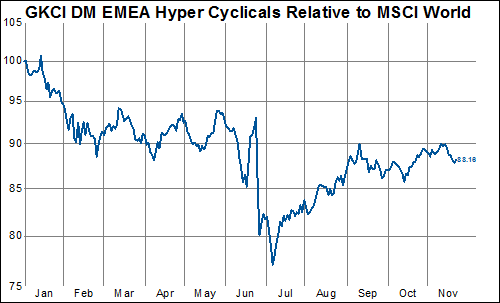 Late cyclical stocks (energy, industrials, and materials) appear to be the only real driver of the admittedly timid turnaround in overall cyclical performance. Having reached a decade-long bottom relative to the MSCI World in January, they have risen nearly 7% in aggregate so far this year. 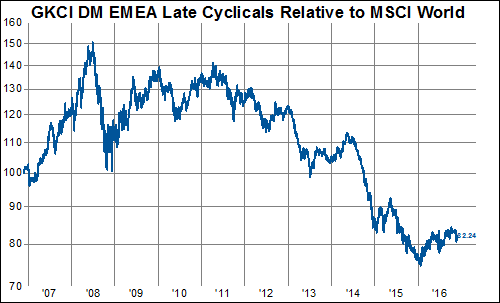 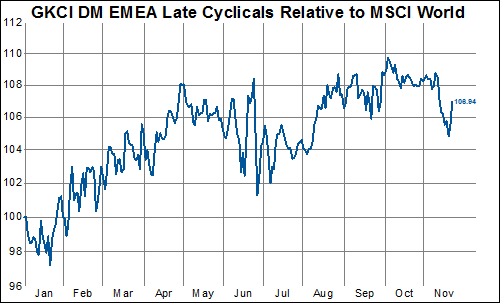 Broad trends in DM EMEA counter-cyclicals, a group that represented leadership over the last several years, are the exact opposite of those in most of the cyclical groups above. These stocks peaked at near 60% relative outperformance over the last decade back in late January, having now underperformed the MSCI World Index by some 20% since. 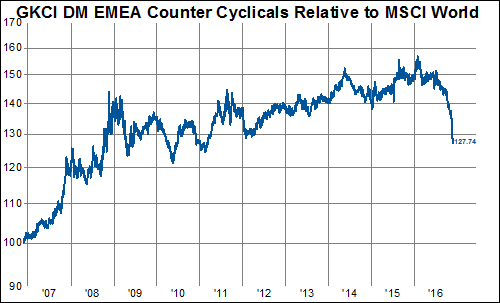 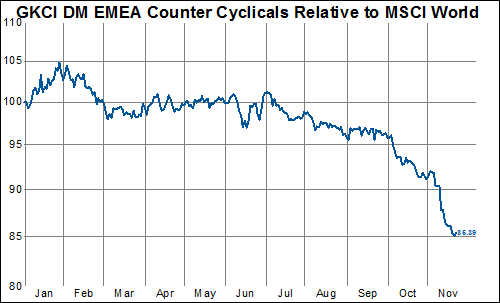 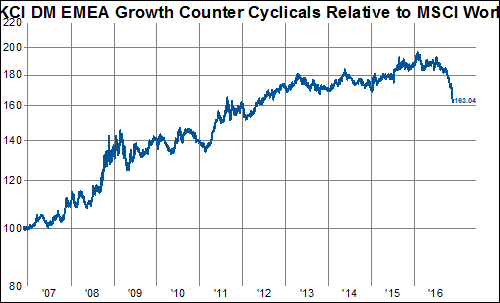 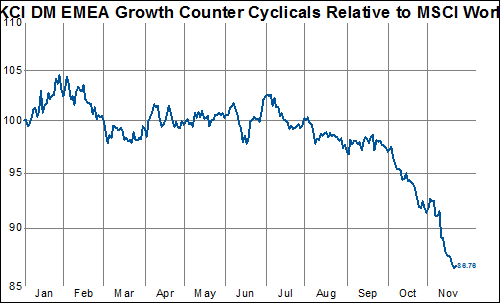 The charts above would seem to indicate that, while DM EMEA counter-cyclicals appear to have abdicated their multi-year role as market leadership, the more cyclically inclined groups haven’t (yet?) fully asserted themselves as new leadership. In the meantime, the relative performance of European equities appears grossly disconnected from economic indicators such as the PMI survey.

The good news here? In the past, DM EMEA underperformance has tended to occur a few months after a peak–and subsequent decline–in the PMI readings (2007/8, 2011). In addition, the sharp dip (and recovery) in 2010, as well as the overall decline in relative performance over the last couple of years have occurred in spite of steady PMI readings. So, while a fall in PMI figures generally precedes a period of relative underperformance, lagging European equities doesn’t necessarily mean we will see a serious drop in the economic indicator. If DM EMEA cyclicals can collaborate to put together a decent, concerted rally, they just might be able to close the gap.