All three portfolios are even higher since the 15th. Post US elections, Crescat has been very active in order to take advantage of changing market fundamentals and sector rotation. However, much of the market action has fallen into line with our pre-existing macro themes and positioning. For example, the Crescat Global Macro Fund was up 4.8% net on the day after the election.

The great news for our investors is that the entire year’s drawdown in the Global Macro Fund was erased in the first five days after the election. The fund is now in the black year to date with 14 out of 17 of our macro themes up in November. We exited the Maturing Expansion theme and added a US Fiscal Stimulus theme last week. We will continue to work hard to protect the gains and keep them going through year end and beyond. 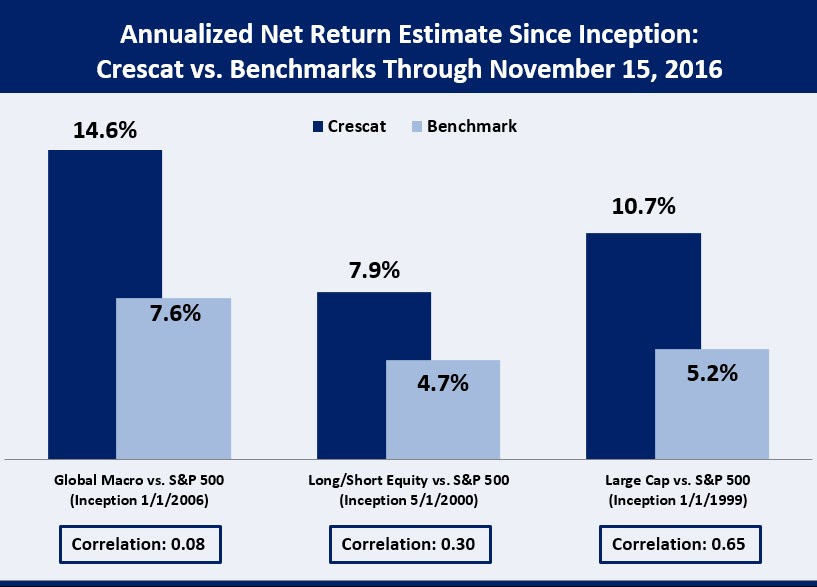 The markets are heating up in favor of Crescat’s themes. We think it is a great time to invest with Crescat. The deadline of a 12/1 investment in our hedge funds is fast approaching.

For more details on our themes and positioning please read on…

The surprise Republican sweep was a game changer for the financial markets and the US economy on many levels. Most market pundits believed a Trump win would be a negative for the US stock market and indeed on election night, S&P futures were down as much as 5% in the overnight session. At that point, we estimate that the Crescat Global Macro was up more than 3% based on futures prices. Long short was also up strong. This is evidence of our hedge funds’ true hedged nature and ability to perform down markets as well as up markets.

After an early morning Trump conciliatory victory speech, however, market participants quickly rethought their bearish stance on US equities. The most bullish driver for the US stocks and the US economy is the likelihood of sweeping tax cuts at the corporate and individual levels, which few had even thought possible just a few weeks ago. In our hedge funds, we moved quickly from a modest net-short position across global equities to a modest net-long position the day after the election. We remain net long US stocks and net short emerging market stocks. All else equal, the prospect for tax cuts is the most bullish aspect of the Republican sweep for US stocks and the economy. All else is not equal however. An economic boost from tax cuts will come with a cost of rising inflation, rising interest rates, and increased US government deficits. These factors along with the latest rise in the US dollar have already helped to trigger a global bond and emerging markets selloff. If routs in bonds and emerging markets accelerate, it could circle back to quash the latest US stock market rally. While a 25 basis point Fed rate hike in December is now a 98% probability based on Fed Funds futures, global financial markets could face similar headwinds that followed last December’s 25 basis point hike, particularly if the selloff in the Chinese yuan accelerates.

We wrote about one of our newer themes called Peak Deflation in our quarterly letter, and discussed it on our Q4 Quarterly Conference Call before the election. It is our best performing theme month to date in the Global Macro Fund. We laid out the case for this theme based on rising inflation expectations and “hot” monetary policy by global central banks that have kept interest rates too low for too long. This is evidenced by both negative real interest rates and real interest rates below the natural real interest rate for the longest stretch since the 1960s in the US. We also talked about bi-partisan Congressional, Fed, and academic macro economist support for new fiscal stimulus measures, regardless of which candidate won the White House, as more support for this thesis.

In our Peak Deflation theme, we were short long-duration US Treasuries, Japanese government bonds, German bunds, UK Gilts, Italian government bonds, as well as US investment grade bonds and Australian government bonds well before the election. The election results only exacerbated the selloff in global bonds. With over $1 trillion in global bond market value wiped out since the election, we took partial profits over the last several days in this theme but remained positioned for the theme to continue to play out. This is a short bond theme that is unique to our Global Macro Fund with a very low cost of carry. Yes, we believe it is the end of a record 35-year secular bond bull market in the US. In line with the bond market selloff, our Twilight in Utilities theme, a short US utility stock theme in both hedge funds that is supported by our fundamental equity model, has also been playing out very well and is one of our top performing themes month to date.

The Republican sweep also has accelerated our short thesis on China, emerging markets, and the Australian equity and currency markets. The Chinese yuan has continued to devalue just as we have been predicting, and our China Currency and Credit Bubble and Asian Contagion themes, both short themes, have generated strong gains month to date in both of our hedge funds. Our foreign currency shorts, which are interspersed across a variety of our themes, have been playing out very well month to date. These currency shorts have been an important hedge to our precious metals longs in our Global Fiat Debasement theme, which has been our sole negatively performing theme month to date of any significance across all strategies.

Many of our US oriented long equity positions have been working well this month as well. The day after the election, we added to US financial stocks, the best scoring sector in our fundamental equity model under our Fed Moderation theme. The potential easing of Dodd-Frank regulations and rising interest rates are bullish for the US financial sector. In health care, a likely rollback of the Affordable Care Act (Obamacare) to one degree or another is undeniably positive for much of the healthcare sector. We added to our existing holdings of pharmaceutical stocks that score well in our model on the day after the election as part of Aging Population theme. Many pharmaceutical stocks had been unduly punished in recent months and were downright cheap under the threats of a Clinton administration. Ones that we favor tend to have large overseas cash stockpiles that would benefit under a tax repatriation deal. We also added to our defense company longs the day after the election under our ongoing Security and Defense theme. The prospect for higher defense spending has increased under a Republican controlled government amidst rising geopolitical tensions. Many of these stocks already score well in our model. The long equity moves that we discussed above were made across all three Crescat products.

Many US technology stocks pulled back in the wake of the election due to a false narrative that has been circulating labeling Trump as protectionist or anti-trade. To the contrary, we think a Trump administration will be pro-international trade. We believe Trump is in favor of new and better trade deals that would favor US trade with the rest of the world. With respect to international trade in the technology sector, China has had the upper hand versus the US for too long. China has gotten away with stealing technology from US companies, creating copycat companies, and then blocking those US companies out of their domestic markets. New trade deals with China should include greater intellectual property protection for US companies and increased access for US to sell technology products and services into Chinese domestic markets. The post-election selloff in technology stocks was overdone, we believed. Thus, we recently increased our long US technology stock exposure toward value-oriented US technology stocks that are cheap on enterprise value to free cash flow metrics and that tend to hold large overseas cash positions that would be favored under a tax repatriation deal. Many of these companies are in our Digital Evolution and Rise of the Machines themes.

Other misunderstandings on China revolve around a Trump administration’s potential re-labeling of China as a currency manipulator. Historically, this idea meant that China maintained an artificially undervalued currency to gain an export advantage. Since the Global Financial Crisis, however, the direction and goals of China’s currency manipulation have turned upside down. Most of the world has been oblivious to the rise in the valuation of the yuan due to China’s massive money and credit expansion that has not come with a commensurate decline in the yuan. Crescat has been at the forefront of identifying and attempting to change this view over the last several years. We have already been capitalizing on the yuan decline for our investors, but we strongly believe there is much more to play out. China is certainly a currency manipulator. However, it has flipped China from running an economy with artificially undervalued currency to running an economy with a massively overvalued currency. The overvalued yuan has allowed China’s wealthy class to acquire foreign real estate on a scale that far exceeds anything we have seen in our lifetimes. It dwarfs the Japanese foreign real estate buying spree of the late 1980s. China is the largest money printer in the world and has an artificially overvalued currency. The world is only starting to wake up to this fact.

The China Currency and Credit Bubble was already in the process of bursting regardless of who was elected in the US, but the Trump victory was a catalyst for a renewed China and emerging markets’ selloff. Thus, starting the day after the election, we increased the short positions in our China and Asian Contagion themes in our hedge funds.

There is much more that we have been doing in the portfolios that we could write about, but we will leave that for the next update. Please use the links below to download the latest performance reports. Thank you for your continued confidence in Crescat.