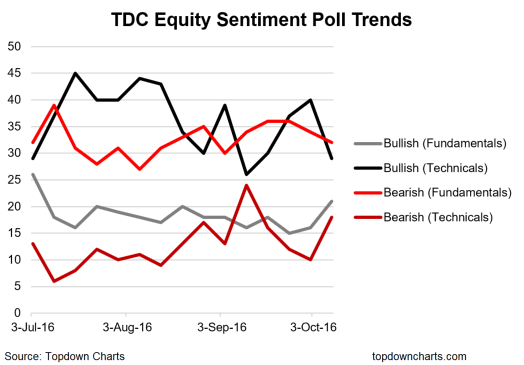 To start with, the above chart shows the trend for each of the 4 options in the poll (bullish or bearish and based on fundamentals vs technicals). Compared to the equity sentiment poll for last week this week saw a jump in bearish technicals and a slump in bullish technicals, meaning on net respondents are seeing downside risk for technical reasons. This could include aspects like negative short-term seasonality that was discussed in this week’s S&P500#ChartStorm, also the fact that the market has failed to really get back above the 50 day moving average. 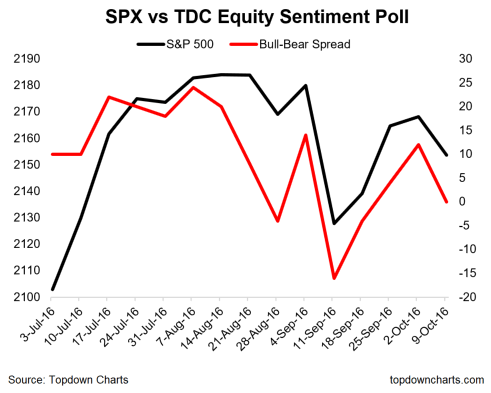 Looking at the overall bulls-bears spread, it came back down to 0 with 50/50 overall bulls vs bears from +12 last week, so sentiment overall remains skittish and alert to downside risks. It’s entirely possible that this could be the start of a down move in the market with the roll over in sentiment a precursor.
Below are the 4 supplementary graphs showing the individual bull-bear spreads specifically for “fundamental analysis” rationale and “technical analysis” reasoning.  Also included is the technicals vs fundamentals spread (a gauge of whether technicals or fundamentals are driving the predominant view), and the number of respondents. 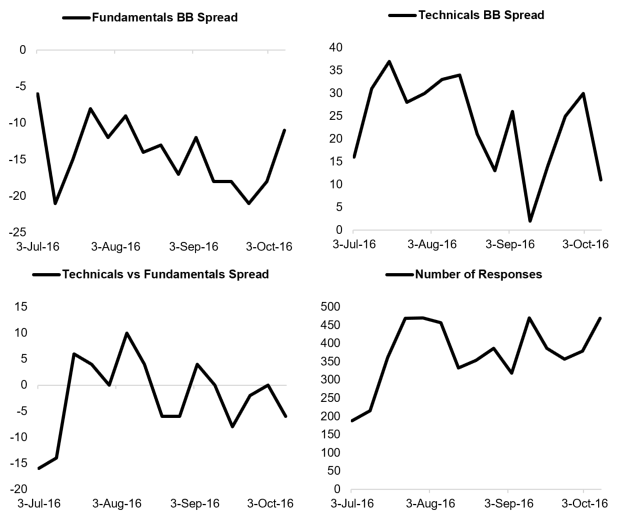 The key standout this week is the rise in the fundamentals spread to a 10-week high, driven by a solid uptick in bullish for fundamental reasons and another slight decline in bearish for fundamental reasons.  Whether this is being driven by animproving earningsand economic outlook, or perception about animproving global economy, or a slow-going Fed, the turnaround is notable, particularly given the steady downtrend that had been in place. A robust turnaround in perception on fundamentals will be key for a sustainable market rally.
The second lowest reading in the technicals bull-bear spread could just as easily be a warning vs a contrarian buy signal. Given how the market is currently coiled on many fronts, a breakout could come in either direction, so it will pay to be nimble in the coming weeks.
Bottom line:  This week saw an improvement in the fundamentals bull-bear spread vs a decline in the technicals bull-bear spread – an interesting and potentially positive tension.