ValueWalk
Home Technology The Aging of the Microchip Industry Is the Reason Behind This Economic...

Classical economics argues that as capitalism matures, competition causes both wages and profits to decline. Wages go down because the early successes of capitalism cause more workers to compete for jobs. Profits decline because more businesses enter markets, causing business failure.

Why hasn’t that happened?

Karl Marx gave the answer… but he didn’t see that it negated his theory. He argued that under capitalism, the means of production are constantly transformed. As some industries decline, others emerge.

Those new industries start with much higher wages and rates of return on capital. So there’s no revolution, just the constant ferment of innovation.

What makes this possible?

Improvements in technology are one cause. They trigger new methods of production, distribution, and organization that lead to increased productivity per worker. As productivity goes up, profit margins and wages do too.

That’s why this chart is so troubling. 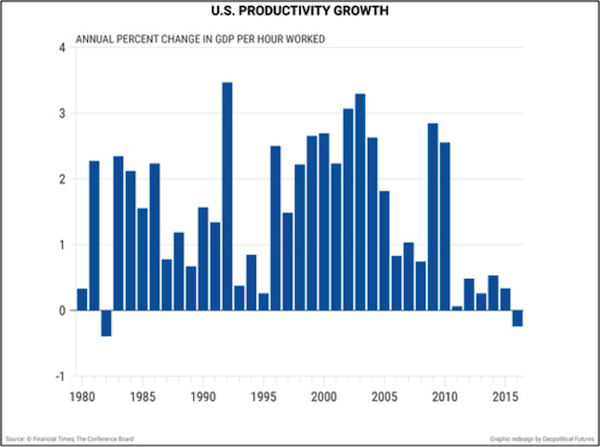 The link between the microchip industry and productivity

I would argue that this crisis has a great deal to do with the aging of the microchip industry.

The introduction of the microchip into all parts of the economy had a massive effect, like that of electricity or the combustion engine. These technologies also had a range of unintended consequences that gave them a logarithmic effect on the economy.

Let’s take a look at the automobile. In 1910, Henry Ford’s production innovations introduced the automobile as a revolutionary technology. By 1950, his invention was a norm in industry. It had ceased to be transformative. It had transformed the culture.

From 1950 onward, the focus was less on improvements in performance than on design and marketing. Wages and returns remained high for about 20 more years, but it did not radically improve productivity in other industries. The innovation had been absorbed. And then, decline set in.

By the 1970s, the technologies spawned in World War II had reached maturation. A time of economic dysfunction set in. Then in the early 1980s until the early 2010s, the microchip helped to reverse that global stagnation.

IBM introduced the first PC in 1981. In 35 years, the microchip has transformed all aspects of life and business. But when the new iPhone was introduced, the focus was on the lack of a headphone jack.

It is reminiscent of the features introduced for cars in the 1950s. Consumers were still excited, and the auto companies made the best of it, but the heroic days of auto development were done.

Now, there are still new applications to be found in computing, but the heroic age is over. And the amount to which it can surge productivity is as well. It is now time to stop thinking of chip-based systems as cutting edge.

A period of economic malaise occurs between one socially transformative technology and the next. But there has always been an emergent new technology that revolutionizes society and economic performance.

Economic problems are compounding the instability in Eurasia. The aging of the microchip industry is critical because it has decreased productivity growth. That negative growth puts in place the decline in wages and pressure on profitability that classical economists predicted. In turn, that puts stress on a fragile region of the world.

The internal combustion engine was the basis of warfare in World War II. Since the 1980s, militaries around the world have shifted to microchip-based warfare… from precision-guided munitions to field hospitals.

Productivity and technology are foundations of the Eurasian crisis. Whatever comes next will be a foundation of war.