The Dow Jones Industrial Average has been going sideways ever since the Commerce Department reported that retail sales in July came to a grinding halt (0.0%).

At the same time, companies including Starbucks, McDonald’s, Ford, Burberry, and Gap are reporting disappointing sales. That means trouble in shopping paradise.

Target just reported a Q2 drop of 1.1% in same-store sales. It expects a “challenging environment in the back half of the year.”

There are many reasons why Americans have become reluctant shoppers. I talked about this in my recent article “The Stressed-Out, Tapped-Out American Consumer.” Stagnant incomes and rising debt loads are part of the problem.

But another big factor is a change in spending psychology.

The save vs. spend mindset has shifted

Americans are becoming big savers, according to Deutsche Bank,. 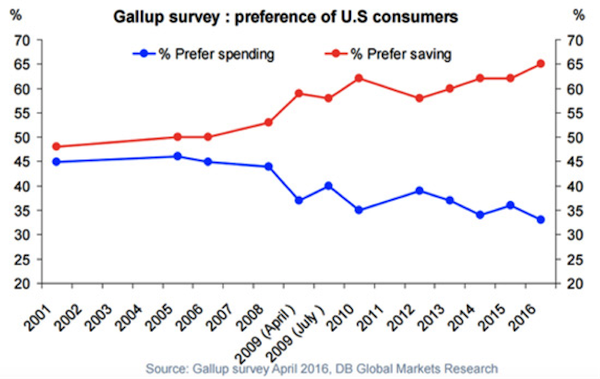 The save vs. spend mindset has shifted for all adults. But this change is most dramatic for Millennials. 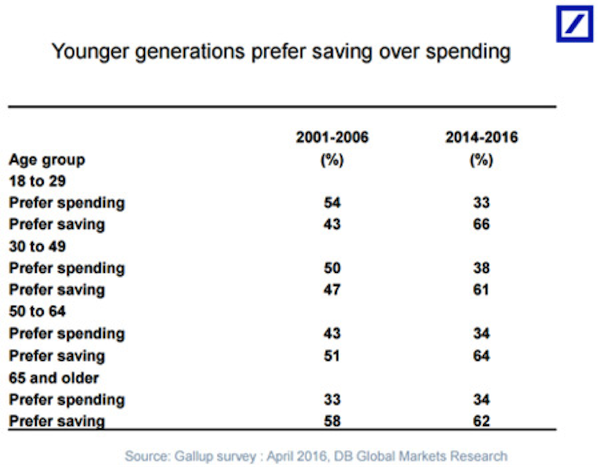 Transport of goods is slowing

Evidence of shopping fatigue is also showing up in the transportation food chain. 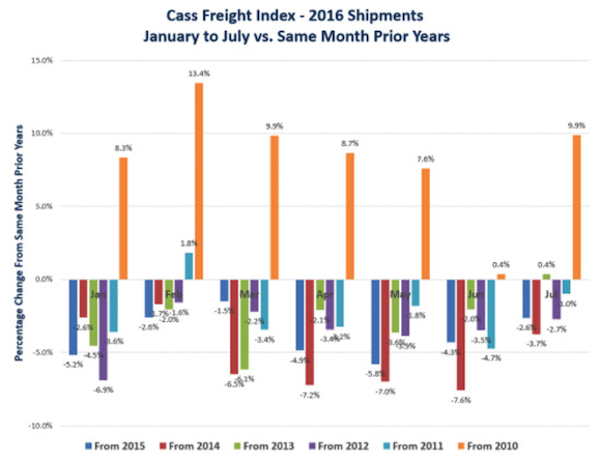 Shipping is slowing, too. Maersk Line is the largest container shipping company in the world, so it deserves close attention. Times have been tough for shippers. And Maersk expects the business to get worse.

“Currently we are challenged by market headwinds,” said CEO Soren Skou during the latest earnings call, “…in the form of low growth and excess capacity in both our industries, and that has led to declining prices and declining revenue.”

Jakob Stausholm, part of Maersk Line’s management board, told Reuters, “It’s really tough, and everybody in the industry is really suffering, and so have we.”

Maersk isn’t the only shipper in trouble. Evangelos Chatzis of rival shipper Danaos said, “World GDP growth is struggling… Combined with trade growth slowing down, this is a recipe for a very bad market.”

Ports confirm the shipping slowdown. The Port of Long Beach just reported a 7.7% year-over-year decline in the number of shipping containers that pass through:

“Due to continued market uncertainty and high inventory levels, the traditional holiday peak season is off to a slow start, and several national forecasts have been revised downward to reflect this softness in cargo movement.”

Businesses have too much inventory

The inventory-to-sales ratio is climbing. This tells me that demand is weakening and businesses aren’t moving their goods.

The ratio tends to increase during the late stages of an economic expansion. This often represents the turning point in a business cycle.

The US’ consumer-driven economy has hit a brick wall

You’ve heard it before—the US is a consumer-driven economy. And 70% of GDP is tied to consumer spending. That’s why you need to connect the dots between the retailers’ warnings, the shift from spending to saving, and the woes of the transportation food chain.

If you do, you won’t find anything to be bullish about with this stock market.

Keep in mind… buy, hold, and pray is NOT an investment strategy.

Simply stated, we believe in taking a realistic approach to the economy and investment markets that starts by stepping back from all the noise and fear in the daily news and, with the aid of our deep network, focusing on the search for the world's best income opportunities and for great companies doing great things—both in North America and around the world. Welcome to Mauldin Economics!