When I saw the chart, the first thing I thought was, “hockey stick”.

It’s flat on the left side, then suddenly soars up and to the right, indicating an abrupt and rapid rise in prices.

Which chart am I talking about? Real estate prices, specifically in an uptown enclave of Dallas, Texas– the only place in the United States where I still owned property… until a few days ago.

I grew up in the Dallas area, and returned there briefly once I was out of the military.

It was late 2004 / early 2005; my father had recently been diagnosed with a brain tumor, and I bought the condominium so that I could be near him.

Unfortunately my father passed away shortly after, and I left town almost immediately.

Rather than sell the condo, though, I kept it and rented it out.

At first things were great. I could command very high rents and had very little vacancy.

But over time things changed. It became much harder to find tenants, and the monthly rent I could charge started to fall.

Simultaneously my property taxes and homeowners association dues skyrocketed; the HOA dues in particular increased more than 10% per year.

And yet according to the real estate agents in my building, the prices of the condos themselves were hardly moving.

So I had a pretty nasty combination of income deflation, cost inflation, and asset price stagnation.

At one point about 18 months ago, in fact, a real estate agent approached me and asked if I would be willing to sell.

She quoted me a price that was 10% BELOW what I had paid for my condo more than a decade earlier.

I was dumfounded… and verified the price with several other agents and websites.

She was right. My upscale condo in one of the nicest neighborhoods in the city was actually worth less than when I had bought it.

I politely refused her offer to put it on the market for me and continued to collect the rent checks.

But then something interesting happened.

A few weeks ago another real estate agent approached me and asked if I’d like to sell the condo.

Same response– “Sure, how much?”

This time the price she quoted was over 15% MORE than what I had paid, and 27% more than what it was worth less than 18 months before.

So I started doing some research and looked at the prices of real estate in the area. And that’s when I found the chart: hockey stick. 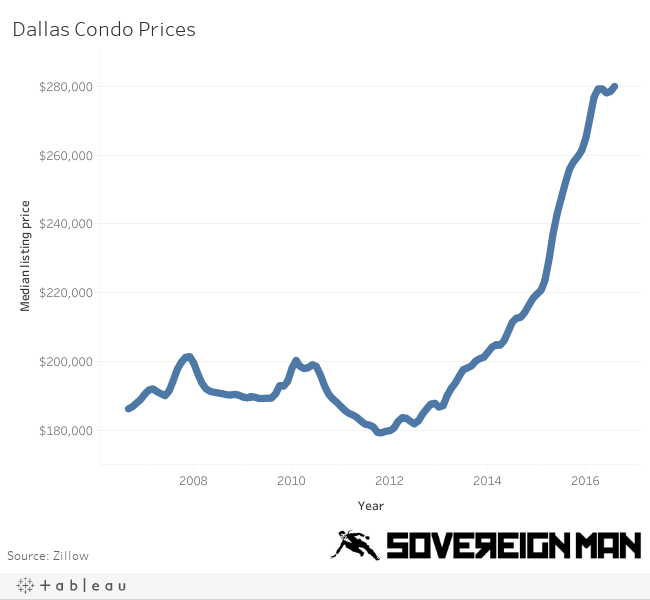 It’s not just Dallas; home prices across the United States are at or near their all-time highs, eclipsing the previous peak set a decade ago.

By itself, a rising price is not enough of an indicator that the housing market is nearing another bubble.

Sometimes prices rise due to supply and demand fundamentals. And to be fair, that is happening in a number of Texas markets.

According to IRS data, hundreds of thousands of people from California are migrating to Texas each year, and that will clearly have an impact on property prices.

But even still, it’s highly unusual for property prices to rise so quickly, especially when you consider the other factors.

Median household income in the United States, when adjusted for inflation, is below 2006 levels– the last time that home prices previously reached an all-time high.

In fact, in the Dallas market, the ratio of home prices to income actually exceeds the level it was at during the previous housing boom.

This means that home prices are passing their all-time highs on both a relative AND absolute basis.

I recognize that I’m probably early, and that I could have probably continued collecting rent for another 12-18 months and sold my condo at a higher price later.

But I’m not the type of person to wait until the last minute and see how high I can ride an artificial boom that’s being fueled by historically low interest rates.

No one can predict with any certainty when precisely a bubble will burst, whether it’s in the housing market, the government’s extraordinary debt, or pitiful bank balance sheets.

And I’d rather be a year early than a minute late.

Simon Black is an international investor, entrepreneur, permanent traveler, free man, and founder of Sovereign Man. His free daily e-letter and crash course is about using the experiences from his life and travels to help you achieve more freedom.