A team of engineering students has designed and built the lightest aircraft in the world that can take off and land with wheels while carrying a pilot.

The aircraft has two rear-mounted propellers, horizontally arranged, each driven by a motor and is powered by lithium-polymer batteries.

The electric paraglider trike, named the Delta, was built under the auspices of FrogWorks, a design and prototyping studio for green vehicles founded by and for students at the National University of Singapore. The Delta follows FrogWorks’ previous flying machine named Snowstorm, which was recently exhibited at the Founders Forum in London.

The Delta’s features and capabilities

The Delta weighs just 49 kilograms (108 pounds), and is capable of carrying one person up to 75 kilograms (165 pounds). In its current prototype, it can fly up to a speed of 36 kilometers (22 miles) per hour under normal wind conditions, and for a typical flight time of 10 minutes on fully charged batteries. This allows it to cover up to a distance of 6 kilometers (3.7 miles). 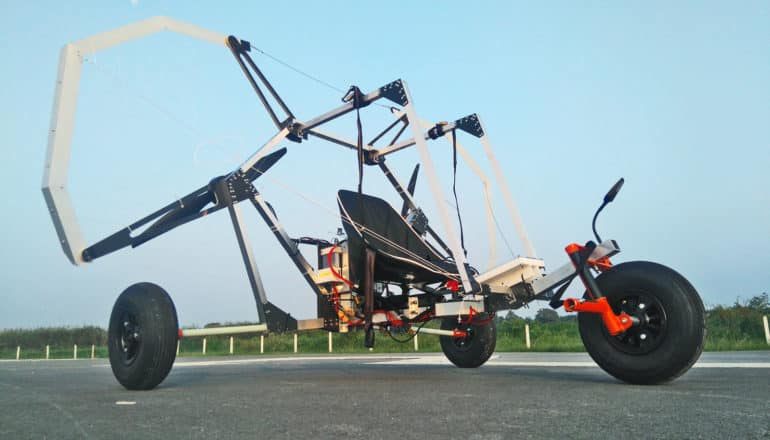 It has a chassis with wheels and steering, a seat for the driver, two electric motors, two propellers, and it incorporates an off-the-shelf paraglider. The team custom-built the chassis, which includes a frame made from aluminum with carbon fiber connections.

The Delta has three wheels, where its two back wheels are supported by fiberglass rods suspension, while the front wheel is connected to the steering—an inspiration that the team took from familiar children’s tricycles.

Propulsion comes from two 8-kilowatt brushless electric motors, arranged horizontally behind the pilot. Each motor drives a 31-inch propeller. Two lithium-ion polymer batteries provide the electricity needed to power the motors. The paraglider attached at the back of the Delta provides the lift required for upward takeoff as it catches the wind when the aircraft moves forward.

The team also designed several features to ensure the safety of the pilot. This includes a roll cage to protect the pilot, fiberglass rods to cushion the landing, barrier nets between the pilot and propellers, and engine kill-switches for the pilot in case of an emergency.

The maiden flight took place on March 19, 2016 at the Sungai Rambai Aerodome in Malacca, Malaysia.