ECB President Mario Draghi famously pledged to do “whatever it takes” to restore eurozone growth. His attempts to fulfill that promise have led to NIRP and other bizarre policies like the central bank’s massive asset purchases.

Whether the ECB’s interventions are helping the eurozone economy is not yet clear. But they are certainly having consequences. One is the appearance, if not the reality, of central bank interference and favoritism.

The ECB is making private transactions

The ECB’s corporate bond-buying program, for instance, was originally going to purchase already existing bonds on the open market. But, it has morphed into a kind of closed market in which a favored group of companies issues bonds tailored to ECB specs.

The ECB just went a step further and bought bonds directly from two Spanish companies through private placements according to a recent Wall Street Journal report. One was to the Spanish oil company Repsol and the other to Iberdrola—an electric power utility. Morgan Stanley acted as underwriter in both cases.

In other words, the ECB bypassed public markets and simply loaned money to selected companies. They weren’t even going to tell anyone.

Now, maybe the ECB had good reason to make these two private transactions. I don’t know, and they won’t say. But we shouldn’t have to wonder.

Here’s the reality. The ECB is buying so much of the corporate bond market in Europe that it became difficult for it to find things to purchase on the public markets. As a result, the ECB must look into the private markets.

One of the great ironies is that European divisions of US companies are creating loans so they can get the ECB to buy them. It makes perfect sense from the company’s standpoint.

The problem is that this generates false market data that leads other players to make bad decisions.

Consider this chart from the Wall Street Journal. It depicts credit spreads of European corporate bonds. Lower numbers mean a tighter spread. This is good from the issuing company’s point of view because it means their cost of capital is lower. 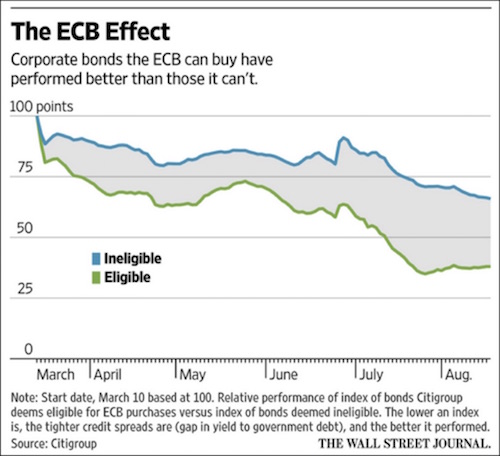 We can see here that bonds eligible for ECB purchase (the green line) have consistently outperformed other bonds since the program launched. The advantage seems to be growing with time, too.

Are these bonds really better, or are they just getting the benefit of ECB’s buying—buying that could end at any time? Technically, we don’t know. There is no way to tell.

My guess? We will know when the ECB runs out of bonds to buy and starts having to loosen its standards as to what it can buy. Then we’ll see more corporate bonds become eligible.

If this new category of bonds sees its credit spread drop, too, we will know that the critical variable at work is not bond quality, per se, but the ECB’s purchases.

The ECB is digging itself a deeper hole

European bond investors don’t have clean data that will let them make confident decisions. Some will withdraw from the bond market, leaving the ECB even more of a monopoly purchaser than it already is.

That’s the opposite of what the ECB claims to want, but its strategy is making the problem worse, not better.