Here’s Why Eastern Europe Is Doomed

The EU is falling apart. Europe’s exporters face a crisis. Its southern economies are troubled. Germany has economic challenges of its own. But as Europe’s crises deepen, something else will become more important.

The erosion of the Schengen zone could hurt Eastern members’ ties with the West. Their economic and social stability depend on access to the EU. This includes funding, investments, trade, and labor markets. So the East is sensitive to economic changes in Western Europe and the continued fracturing of the bloc.

Access to EU labor markets is vital. It has helped the Eastern members avoid employment crises. The Czech Republic, for example, boasts a 4.2% unemployment rate.

Jobless levels in the EU’s Eastern states are low. This is largely because their workers are mobile and cheaper to hire than workers in the West. Millions have moved to countries like the UK and Germany in search of jobs. 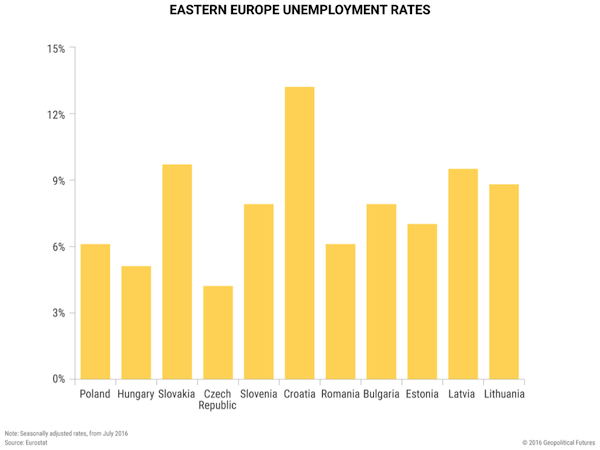 The movement of workers helps lower unemployment rates. It also aids domestic stability. And it brings wealth back to Eastern European countries through remittances. Remittances in Lithuania, Hungary, and Bulgaria added more than 3% to their GDPs in 2014. In Greece and Italy, remittances make up only 0.3% of GDP. 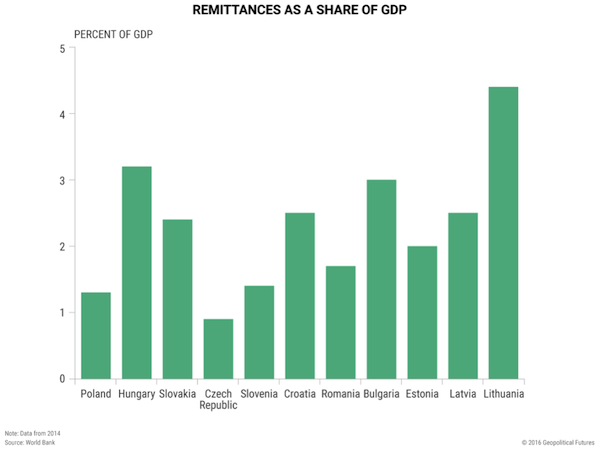 However, two developments threaten to limit these benefits. First, Brexit could close access to jobs in Britain. This could raise unemployment levels and reduce remittances in the East.

The EU’s Eastern states also depend on funding and investment from the bloc. These countries all receive more money from the EU budget than they give.

The largest recipients are Hungary, Lithuania, Poland, and Romania. EU budget spending exceeds 4% of gross national income (GNI) in these countries. Their contributions to the EU budget are less than 1% of GNI.

This may shift after 2020. By that time, the EU will reassess member needs based on income. But based on current policies, poorer countries will still benefit from large budget transfers. 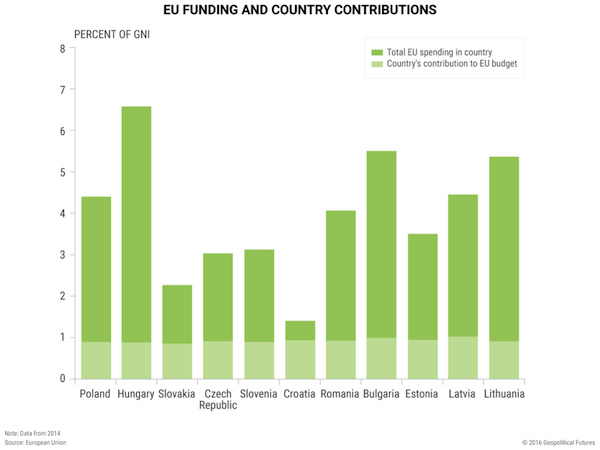 Further, foreign direct investment (FDI) from the EU’s West drives economic growth in the East. Western companies began opening offices and factories in the East in the early 1990s. Today, much of the FDI in the region comes from countries like Germany and Austria. FDI is vital in smaller economies. In Bulgaria, Hungary, and Estonia, FDI stocks were over 70% of GDP in 2014. 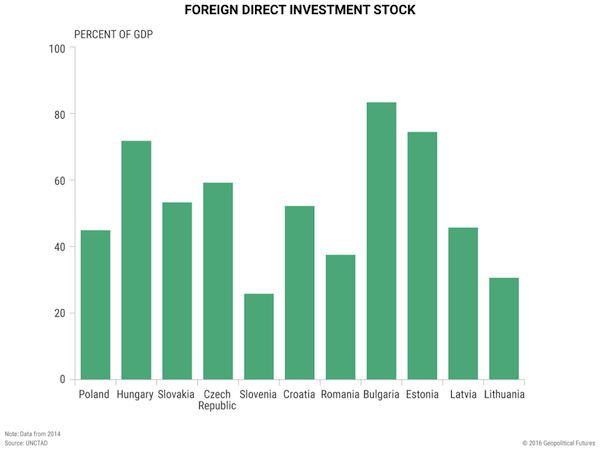 The region is a critical part of Germany’s industrial supply chain. Goods imported from Eastern Europe are used to make German exports. Growth in the EU’s East thus depends on demand for German exports, as well as the free movement of goods and access to Western markets.

The EU’s Eastern members depend on Western Europe. But each country has its own needs. Hungary and Bulgaria are more exposed to shifts in the EU than is Poland, for example. They depend more on exports and FDI. Those two countries receive more EU money as a percentage of national income.

But Poland would also suffer if demand for its exports or access to European markets declined. It would likely suffer economic and political crises, as 2 million Poles returned home after losing their jobs.

As the EU adds more countries in the East, economic connections are multiplied. For the bloc’s Eastern members, the fate of Western economies and EU decision-making are both critical. In the long run, these countries could locate new export markets and attract FDI from outside Europe. But the EU’s Eastern members will stay exposed to Western European markets in the near term.

Law Prof’s Complaint Over Trump’s Phone Call Could Send Him to...