ValueWalk
Home Stocks Is The Fed About To Help Out Gold Investors?

San Francisco Fed President John Williams came out really dovish the other day. He said that maybe we should increase our inflation target.

Translated, that means that we would be willing to tolerate a higher level of inflation before doing anything about it.

Which is kind of the opposite of everything the Fed has been saying for the last year.

It means more coming from Williams, because he’s connected with Yellen (Yellen also came from the San Francisco Fed). Plus, he’s not a hack.

Surprise. The US dollar just got monkeyhammered

Take a look at this chart. 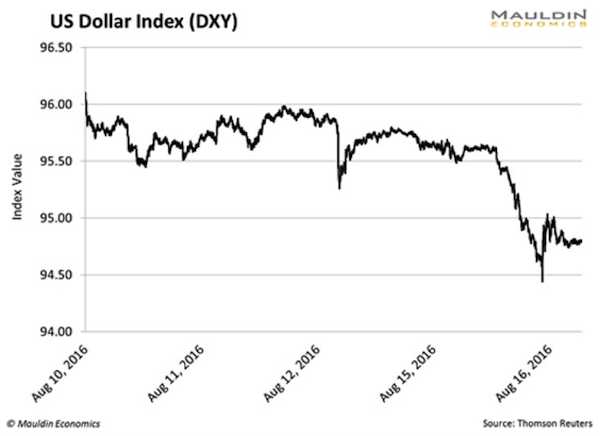 And as a result of the USD getting monkeyhammered, emerging markets have turned into a food fight. 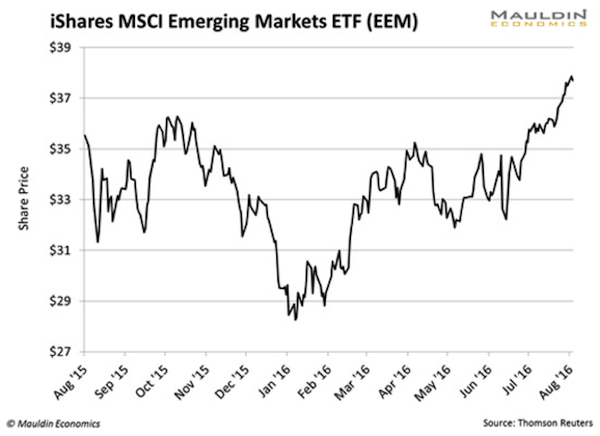 This is not what was predicted by some people back in January:

In fact, emerging markets are up almost 40% from that date.

Bad forecasts are excusable. The market will make a fool of everyone at some point (including me). To the tune of almost 8,000 basis points… I don’t know.

But you know what they say about being wrong. If you’re going to be wrong, at least have company. Nearly everyone was calling for a much stronger dollar, lower commodity prices, and endless EM pain. It was unanimous.

But it never came to pass.

I was right about emerging markets and commodities

If you were a 10th Man reader back in January, you probably remember me getting my head caved in. I was totally alone squawking about how generationally cheap EM and commodities were and watching them make new lows every day.

And you had the “smart” guys on the other side of the trade, making me not feel very smart.

Meanwhile, as editor of the Street Freak letter, I was busy loading up the portfolio with EM and commodities. I think I was making the folks at Mauldin Economics nervous. It was a very out-of-consensus view.

So the answer here is that you really don’t have to know anything about anything. If you are a student of market sentiment, this should have been an obvious trade.

Here’s how the US dollar affects EM and commodities

Now, for the macro thoughts. The dollar rallied about 30% over the course of a year—a truly massive move—and from a technical standpoint, it needed to consolidate. And it might consolidate for years.

This feels like a USD bear market, but it’s not. It’s just a consolidation in the context of a multi-decade trend of USD strength. But it could last for quite a while.

And while the dollar takes a breather, it gives room for EM and commodities to rally.

It’s ironic, the one EM country that investors did like, India, has massively underperformed.

You can always count on the market doing what surprises most of the people, most of the time.

All of this culminates in Yellen’s Jackson Hole speech on August 26, where we are probably going to get a very clear picture of the Fed’s direction.

I’ve been expecting rate hikes (especially post-election), but if the direction of the Fed’s thinking has really changed, we are going to find out then.

If the Fed is dovish, it is going to force other central banks to be even more dovish (to offset their own currency strength), and we will continue the race to the bottom in paper money. 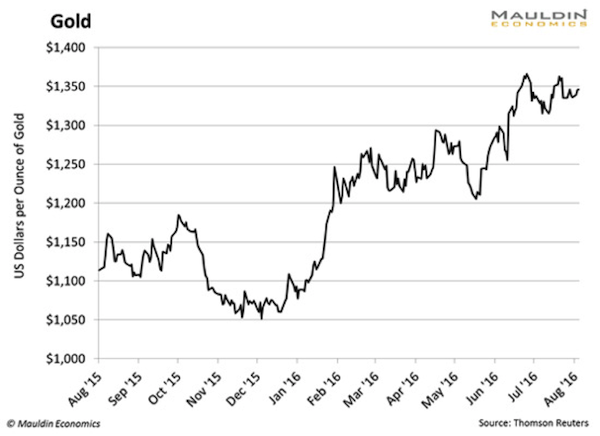 How do you invest in an environment where paper currencies (all of them) are going to zero? Dennis Gartman used to say that he liked to buy stuff that would hurt if he dropped it on his foot. That is what you have to do.

Which means you have to undo the last five years of conditioning, where you got caned every time you bought a mining stock.

Meanwhile, gold miners are roofing (disclosure: I own this): 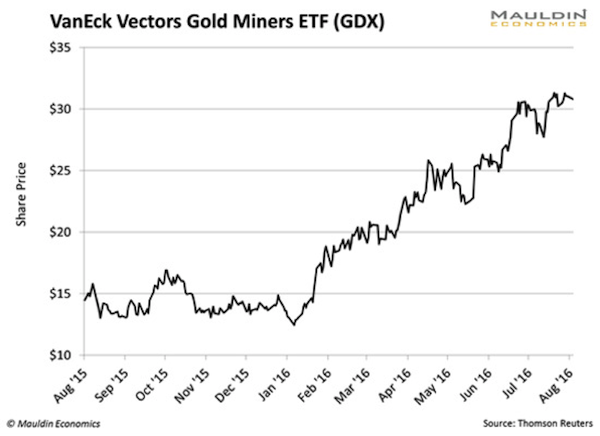 And even the orphaned metals and mining ETF XME is extending the range: 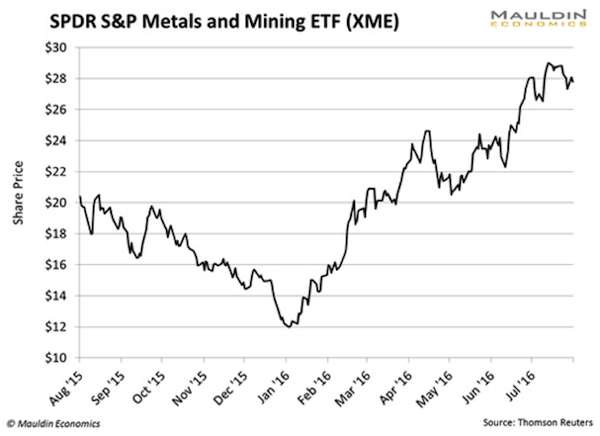 You run into these people in the business who love mining stocks, all the time, they are obsessed with mining stocks. Not me. I don’t even think mining is a particularly good business. But it will be, for the foreseeable future.

Click here to subscribe to Jared’s free weekly newsletter, The 10th Man, so you won’t fall prey to the herd mentality that so often causes mainstream investors to make the wrong decision.