Chipotle is almost a year removed from its first health scare that started the downward spiral that they are still digging themselves out of. The burrito chain’s efforts to jumpstart sales through marketing and promotional campaigns have been unable to gain traction. Financial performance continues to dip along with consumers still not ready to return to the burrito chain following the E.Coli and norovirus cases.

The first quarter of 2016 featured declines in every key metric: revenue decreased 23.4%, comparable sales were down 29.7% and operating margins slid 27.5%. It hasn’t helped that food prices such as chicken and beef have been rising while Chipotle also continues to raise wages for its in-store employees. As the company continues its gradual path to recovery, it’s safe to say that it won’t be fully realized this quarter.

The Estimize community is looking for earnings per share of $1.05 on $1.04 billion in revenue, 1 cent higher than Wall Street on the bottom line and right in line on the top. Compared to a year earlier this represents a 75% drop in earnings and 13% decline in sales. Both EPS and revenue estimates have declined significantly in the last 3 months as the company has found little traction following the multiple health scares. Shares are down nearly 45% since the first health related incident broke. 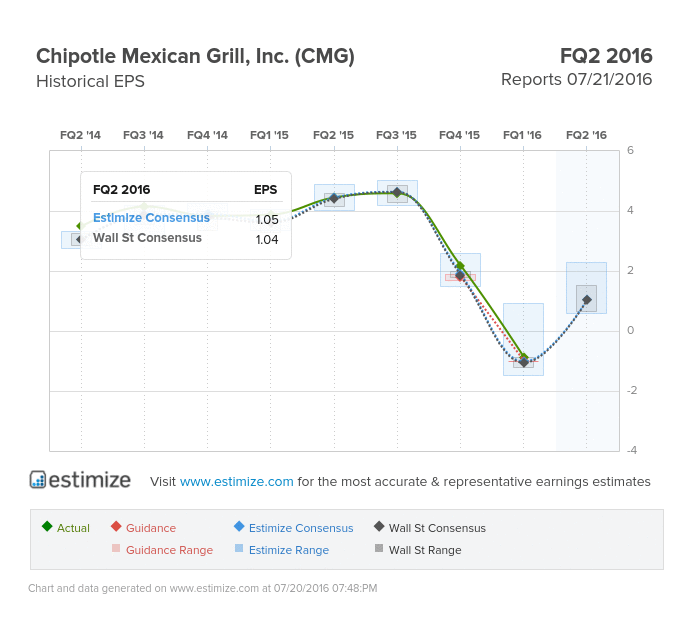 Chipotle hasn’t stopped its efforts to regain its past glory. Last week the burrito chain announced its three month summer rewards programs cleverly named “Chiptopia”. The customer loyalty promotion aims to attract customers with free food and credits for every visit during the summer months. There are three levels to the program (mild, medium and hot) which are scored by the number of visits in a given month. Burrito fans that achieve the hot status for all three months, the highest level of the program, receive free catering for 20 and free entrees along the way.

Customer loyalty programs are nothing new in the food industry. Starbucks is one of the most recent companies to test this promotional activity and has found booming success. Last quarter the coffee chain added 900k members and now has over 12 million active U.S. members. If Chipotle can find a fraction of the success as Starbucks, the burrito chain will be moving in the right direction. 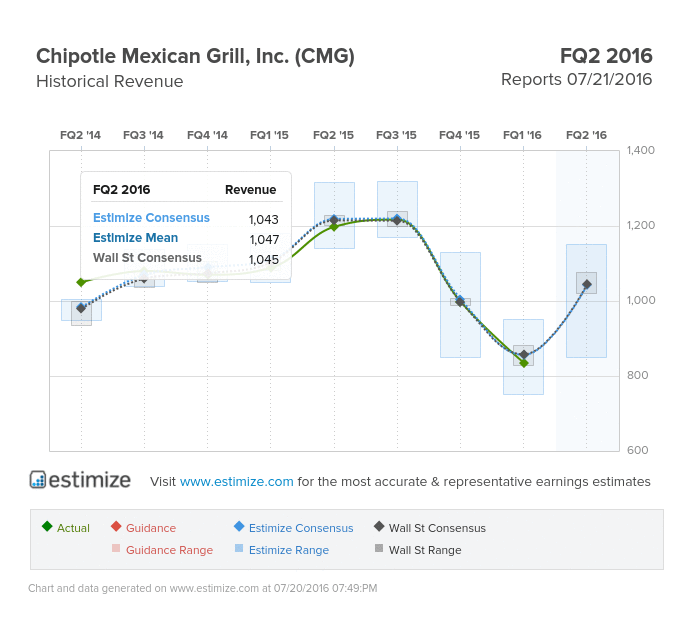 Do you think CMG can beat estimates? There is still time to get your estimate in here!