Should Investors Consider Shorting Starbucks Corporation (NASDAQ:SBUX) Ahead of Earnings?

A cup of coffee is a necessary part of many people’s daily routine. Starbucks hopes those day-to-day habits involve visiting 1 of its 24,000 stores found in 70 countries worldwide. The company has been largely successful in as attracting customers as earnings continue to make double digit gains. In the past 2 fiscal years, Starbucks has posted double digit gains on both the top and bottom line with no sign of slowing down.

The Estimize consensus is high on Starbucks to repeat its past performances. The community is calling for earnings per share of 50 cents on $5.36 billion in revenue, 1 cent higher than Wall Street on the bottom line. Compared to a year earlier this represents a 17% increase on in earnings and 10% in sales. Shares of the coffee giant typically do well leading up to earnings, rising 2% in the 30 days ahead of a report. 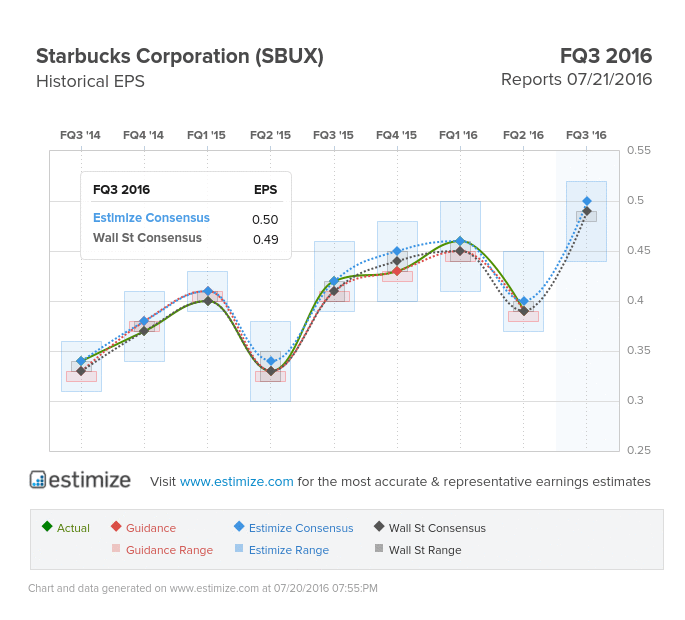 The company’s constant efforts to expand and improve have been key to driving robust traffic trends. Starbuck’s is seeing upside in its relatively new food segment, increased usage of its mobile platform and general improvements in operational efficiency. Last quarter the coffee chain featured a 6% gain in comparable store sales on the 350 new stores worldwide. However its customer loyalty program is proving to be the most successful initiative. In April, Starbucks updated its reward program which will now reward customers for every dollar spent instead of the number of visits. Chipotle has taken a page from the coffee chain and recently introduced its own loyalty program to spur traffic.

Starbuck’s large global footprint has made it susceptible to macroeconomic risks. The last few quarters have seen sales growth disappoint shareholders due to a slowdown in global traffic trends. The Brexit hasn’t helped to alleviate the issue. In fact currency headwinds have only become worse with the Euro and Pound plunging following the vote. Fortunately, sales and profits in China and the U.S. should remain strong enough to offset the volatility in Europe. Relatively softer performance in Europe should be a theme we see from Starbucks for multiple quarters. 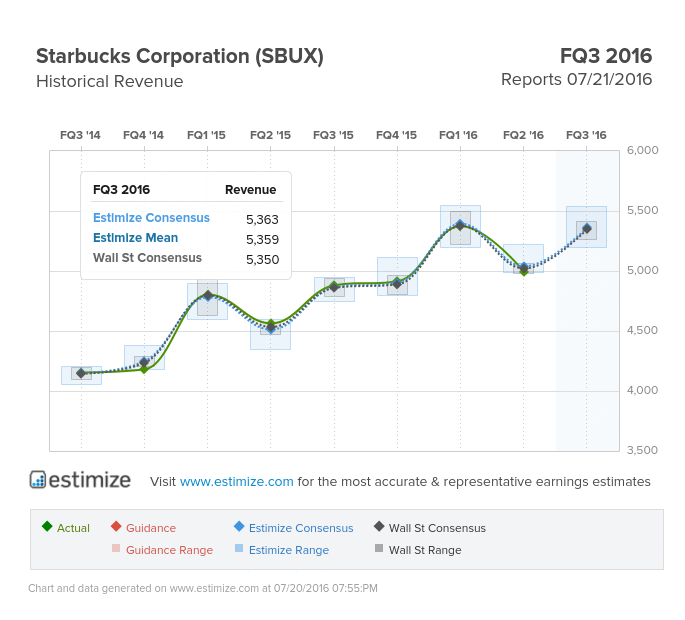 Do you think SBUX can beat estimates? There is still time to get your estimate in here!