ValueWalk
Home Stocks Should You Buy Morgan Stanley (MS) Ahead of Earnings?

Should You Buy Morgan Stanley (NYSE:MS) Ahead of Earnings?

JPMorgan kicked things off for the financial sector with strong results on both the top and bottom line. This week we get reports from the remaining commercial banks and investment banks including Goldman Sachs and Morgan Stanley. Morgan Stanley has been one of the worst investments in the sector, declining nearly 30% in the past 12 months. Things are only expected to get worse when the bank reports earnings tomorrow.

The Estimize consensus is calling for earnings per share of 63 cents on $8.37 billion in revenue, 3 cents higher than Wall Street on the bottom line and $30 million on the top. Compared to a year earlier this reflects a 20% decline in earnings and 11% in sales. Estimates are seeing heavy downward revisions activity ahead of its report as analysts grow skeptical of the bank. 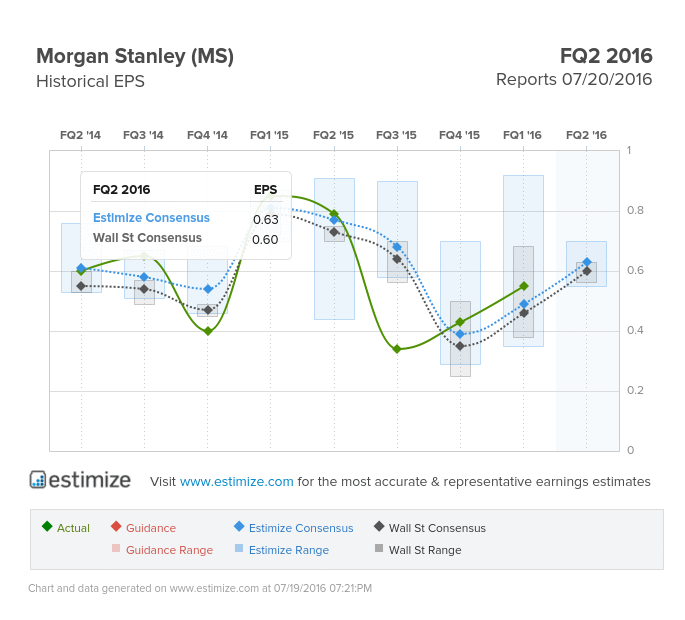 General themes that impact commercial banks are typically different than those that sway investment banks. Instead of interest rates, Morgan Stanley will be focused on overall trends in investment banking including M&A, trading and IPO activity. Commodity and energy markets are also a contributing factor to consider in a quarterly report. Fortunately, oil has rebounded from its lows in February and should not be a concern for the financial sector this season.

The current macro conditions regarding Brexit, the surging U.S. dollar and weak global growth expectations are an added concern for Morgan Stanley. That said, trading activity in and around the Brexit vote has been surging with high volume in fixed income markets. Meanwhile, Morgan Stanley has always been generous with its returning wealth to its shareholders. Shortly following the recent stress test, the investment bank announced plans to repurchase up to $3.5 billion in outstanding shares, a move that typically boosts earnings and share prices.

Last quarter, Morgan stanley cited challenging market conditions as the biggest contributor to the poor quarter. Early signs look as though this week’s report will be a small reversal of fortunes. 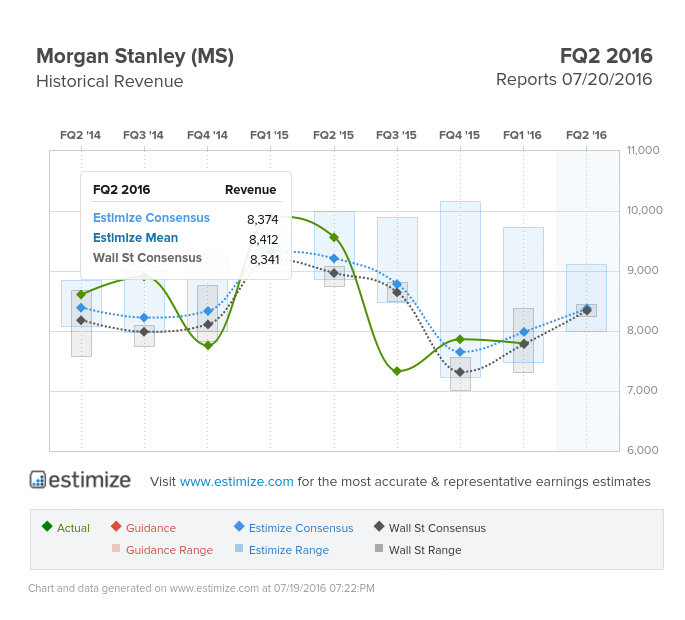 Do you think MS can beat estimates? There is still time to get your estimate in here!