JPMorgan Chase & Co. (NYSE:JPM) To Set the Tone for the Whole Financial Sector this Quarter

JPMorgan kicks things off for banks when its reports Q2 earnings Thursday before the market opens. Reports from all banks will be heavily scrutinized for indications on how they plan on coping with the various macroeconomic events. Across the board, the banking sector will be impacted by the Brexit vote, low interest rates and currency headwinds. Fortunately, the rebound in the oil market and gas prices will alleviate pressure on energy loss reserves.

The Estimize consensus is looking for earnings per share of $1.44 on revenue of $23.95 billion, 1 cent higher than Wall Street on the bottom line and $110 million lower on the top. Compared to year earlier this represents a 7% decline in earnings and 3% in sales. Shares of JPMorgan are down 5% year to date and typically don’t react to quarterly results.

JPMorgan is the biggest of the retail banks in terms of assets under management. Its large assets base and robust balance sheet have left the company vulnerable in the event of another crisis. The company came under intense scrutiny in April after failing to pass the living will standards which are set so that the government will never have to bail out banks again. JPMorgan was one of 5 big banks that would not have access to enough capital in the event of a new crisis. Fortunately JPMorgan was amongst the 31 banks that passed the stress tests conducted last month, putting some of its previous concerns to rest. 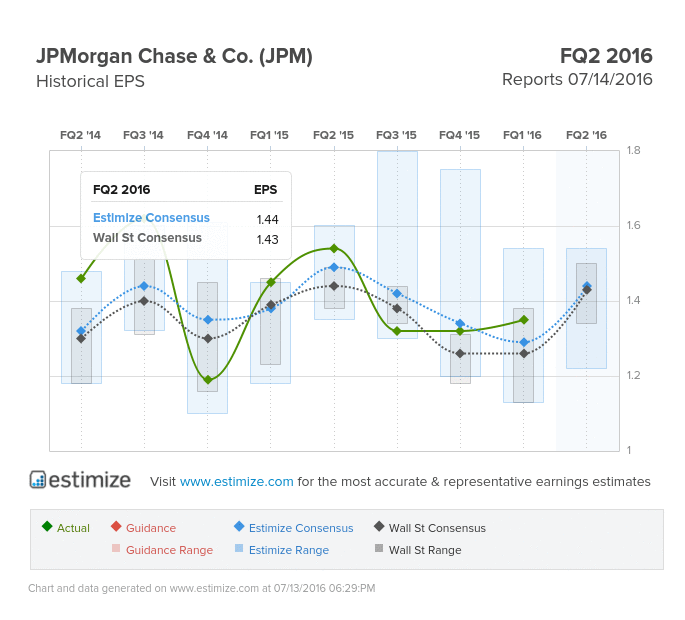 If the Brexit materializes into anything more severe, as many experts suspect it will, then the big banks will be in trouble. Already we have seen fall out from the world’s largest financial institutions which could very well continue to suffer given low interest rates and increasing currency headwinds.

Regardless, JPM has exceeded earnings expectations in 4 of the last 5 quarters and is typically viewed as one of the better performing financial institutions. Last quarter, the company reported increases in consumer banking and asset management sectors. Net interest income increased as well, despite rates staying close to zero during the period. However, significant declines were seen in commercial and investment banking sectors. Overall net income and revenue were down on a yearly basis with a high likelihood of continuing through the remainder of fiscal 2016.

Second quarter results are shaping up to feature some similar factors from past results. An early surge in trading activity this quarter appears as if it will be offset by Brexit and other macro concerns. Moreover, investment banking is likely to remain weak, dampened by a persistent decline in M&A activity and weakened IPO market. Fortunately the mortgage business should see a big boom from lower mortgage rates. Energy loans and expense management should also not be a big thorn in Chase’s side. 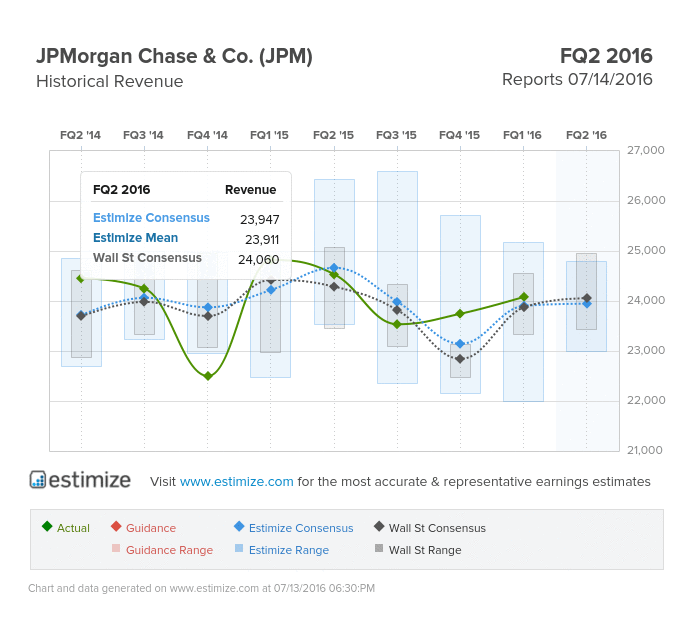 Do you think JPM can beat estimates? There is still time to get your estimate in here!