Intel is scheduled to report second quarter earnings this Wednesday after the market closes. The company kicked off fiscal 2016 with mixed results, trumping earnings expectations but missing its sales target. Year over year comparisons were strong, nonetheless, with earnings increasing 32% and revenue jumping 8%. Many analysts are optimistic that Intel can piece together a strong quarter after Micron Technology reported revenue growth in its PC segment. It isn’t a secret that PC sales have waned in the past few years as Macbooks grow in popularity and computers become less necessary. If the PC market can hold its own then Intel should have nothing to worry about this quarter

The Estimize consensus is calling for earnings per share of 55 cents on $13.57 billion in revenue, 1 cent higher than Wall Street on the bottom line and $40 million on the top. Compared to a year earlier this represents a 2% decline in earnings while sales could grow by 3%. Intel consistently beats both the Wall Street and Estimize consensus sin 82% and 53% of recorded quarters, respectively. 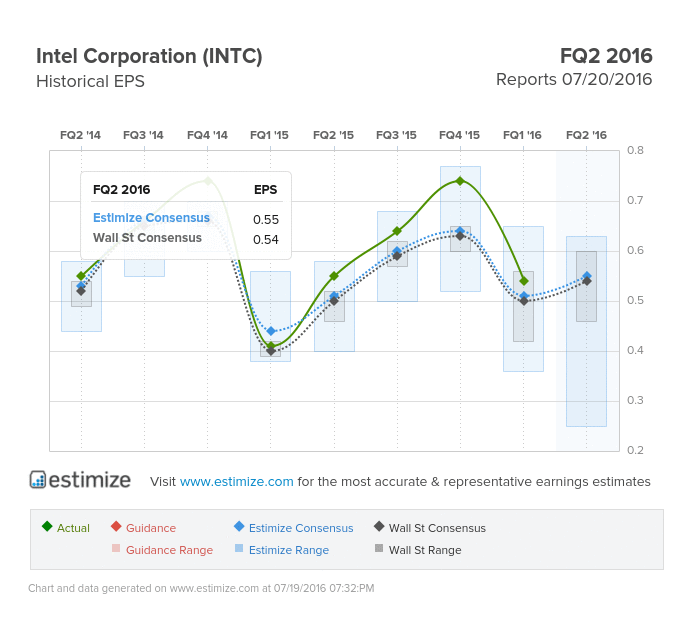 Intel kicked off 2016 on a sluggish note. PC sales fell by over 15% in Q1 and pulled down Intel’s revenue as a result. Guidance was then lowered to mid mid single digit growth and plans were made to restructure the business. Apart from the restructuring process Intel announced it would cut 12,000 jobs, mostly in the weak PC sector. In doing so, Intel will shift its resources away from PCs towards high growth markets such as IoT, data centers, and 5G technology.

The company’s efforts in these areas have been apparent, allowing them to compete with Nvidia in terms of machine learning and collaborate with BMW and Mobileye to develop car technology. Meanwhile Intel is rumored to have secured orders with Apple to produce chips for the iPhone 7, a partnership once exclusive to Qualcomm. Intel also works with Google to produce chips in its Android operating system. Working with both Apple and Google propels Intel to one of the top spots in the mobile chip making business.

It won’t all be smooth sailing for Intel though. The company still faces outsides threats in the form of slowing growth in emerging markets, greater competition and macroeconomic risks. Having a hand in so many different sectors exposes them to wider competitive threats from companies such as Qualcomm, Advanced Micro Devices and NVidia. Additionally, the Brexit fallout and strong U.S. dollar will likely put a drag on earnings moving forward. Even though Intel appears well positioned to report another beat, future guidance will likely dictate whether the stock moves up or down. 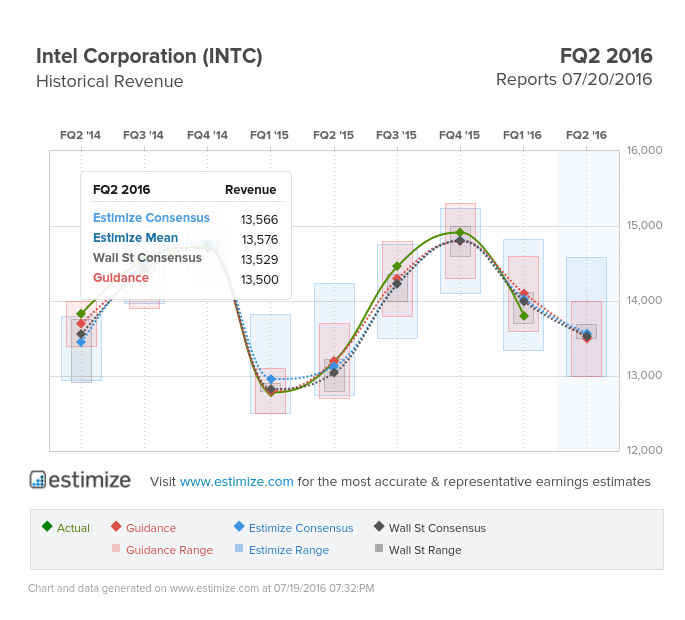 Do you think INTC can beat estimates? There is still time to get your estimate in here!