General Mills is a dividend achiever, which has managed to reward patient shareholders with a dividend raise for 13 years in a row. The company has stated that it has paid dividends for over 100 years in a row.

The company raised its dividend for a second time this year. The new dividend is 48 cents/share, which is 4.30% higher than the first raise announced in February. The previous raise was rather low, and had me concerned. Of course, now that we have two raises in a row, I am in a better shape.

Over the past decade, this dividend growth stock has delivered 14% annualized returns to its shareholders.. Unfortunately, the stock price has gone up a lot. This is possibly related to the offer for Hershey by Mondelez. All of a sudden, this offer reminded everyone that quality food and beverage companies more valuable. Future returns would be dependent on entry valuation, growth in earnings per share and dividend yield at the time of investment. 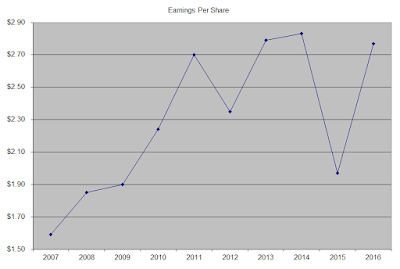 The company has utilized share buybacks in order to reduce the number of shares outstanding from 818 million in 2005 to 611 million in 2016.

General Mills has a portfolio of strong brands, as well as the scale of operations to make products and sell them efficiently. In addition, the company is trying to maintain an innovative approach and either develop in house or acquire products in growth niches. Consumer tastes tend to slowly evolve over time, which is why companies like General Mills that try to stay innovative and capture major trends in tastes and deliver profits. Continued product innovation is the key to capturing future growth. That being said, the bread and butter of consumer products companies are its established brands, where a large portion of consumers engage in repetitive purchases, that create repetitive cashflows, which make investing in consumer staples such a steady and profitable endeavor. While things do change slowly over time, the change is not as fast paced like that in the technology field. This gives some time for companies to react, adapt and profit to the changing environment. Having a steady marketing budget also helps to maintain the broad appeal of the company’s products.

Earnings per share could increase from new product offerings, strategic acquisitions, international expansion and streamlining of operations. A constant focus on operations, eliminating unnecessary costs, improving margins and reducing negative effects of input costs are something that should help the company accomplish its targets. The company is able to expand its distribution network on a global basis, invest in innovation and in its strong brands. Having a portfolio of stable food brands generates recurring excess cash flows. Those excess cash flows are not necessary for expansion of the business. Therefore they result in the ability for the company to shower shareholders with more cash every year through regular dividend payments and increases.

The annual dividend payment has increased by 10.20% per year over the past decade, which is much higher than the growth in EPS. Future growth in dividends will be much lower than that however, and will be limited by the growth in earnings per share. 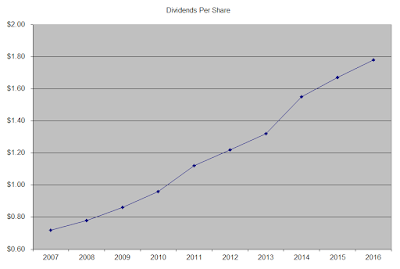 In the past decade, the dividend payout ratio has increased from 45% in 2007 to 64% by 2016. A lower payout is always a plus, since it leaves room for consistent dividend growth minimizing the impact of short-term fluctuations in earnings 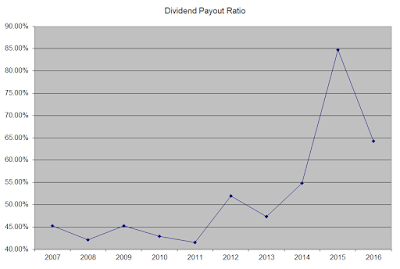 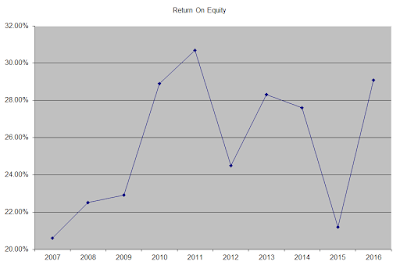