ValueWalk
Home Stocks Is the End Near for Under Armour Inc (UA)?

Is the End Near for Under Armour Inc (NYSE:UA)?

Under Armour was once believed to be Nike’s biggest threat in the footwear space but after cutting its sales outlook in late May that is no longer the case. Analysts reacted negatively to the news and subsequently cut price targets and per share estimates for the upcoming quarter. Macroeconomic challenges and weaker consumer spending have been the two biggest drivers of these cuts. This broader pullback hasn’t only affected Under Armour but many of its peers including Lululemon and Nike. Expectations for the upcoming quarter are relatively muted given the growing problems moving forward.

The Estimize consensus is calling for earnings of 3 cents per share on $1 billion in revenue, 2 cents higher than Wall Street on the bottom line and right in line on the top. Compared to a year earlier this represents a 22% decline in earnings with sales expected to jump by 29%. Per share estimates have dropped nearly 50% since Under Armour’s last report, reflecting analyst’s waning confidence following recent revelations. 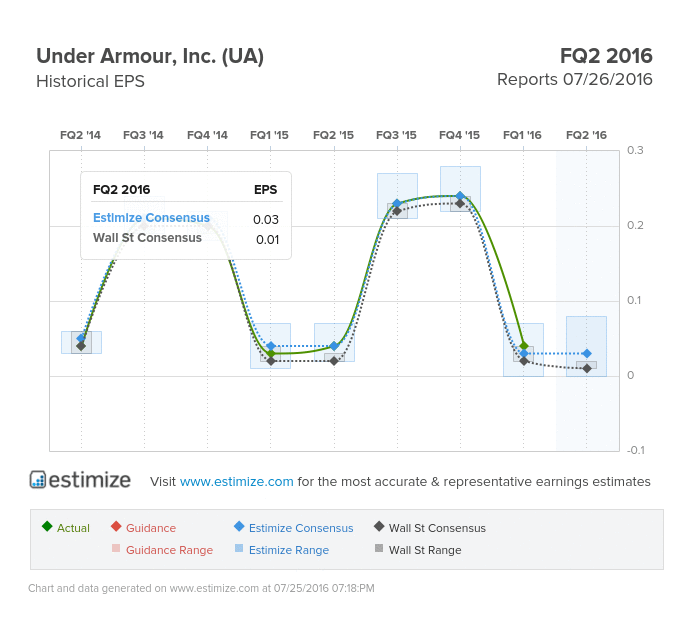 A few months ago, Under Armour issued a statement that the Sports Authority’s bankruptcy would severely impact fiscal 2016 revenue. Sports Authority’s decision to liquidate rather than restructure caused Under Armour to shift its full year guidance down $75 million to $4.93 billion. According to management, Sports Authority accounted for $120 million in revenue, some of which it was able to write down given the bankruptcy. Analysts downgrades have come in bunches following the news with many of them citing weakness in the women’s segment and broader economic challenges.

Fortunately, Under Armour’s growing list of endorsed athletes is helping them stay relevant through these tough times. Stephen Curry is not only the darling of the NBA but also someone CEO Kevin Plank adores. In UA’s most recent earnings call, Mr. Plank referenced Curry nearly 15 times when pointing to the success of footwear sales. The first quarter saw total revenue up 30%, thanks to a 64% jump in footwear sales and resounding 350% increase in basketball sales. The Curry Twos, released a little over 5 weeks ago, have reportedly sold out despite the backlash for its unappealing design. Under Armour also represents other premier athletes including Tom Brady, Jordan Spieth and Dwayne “The Rock” Johnson.

Besides a huge jump in basketball shoes, golf sales and wearable technology have been key growth markets. Under Armour recently released its first connected fitness system, the UA healthbox, in hopes of becoming a leader in this growing space. However, recent price cuts would leave you to believe the healthbox is having limited success. 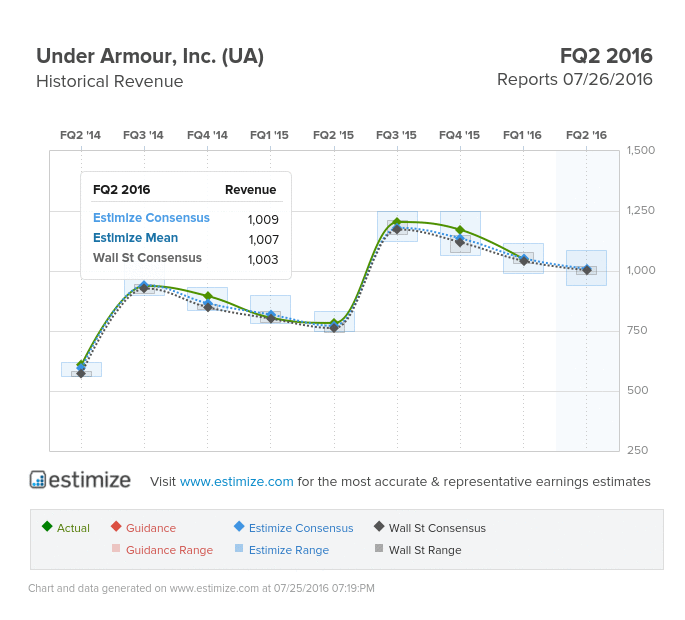 Do you think UA can beat estimates? There is still time to get your estimate in here!