Delta kicks things off for airlines when it reports Q2 earnings this Thursday before the market opens. The airlines are one of the worst performing sectors this year with stocks down over 20% across the industry. Shares of Delta are down 25.3% since the start of the year, largely driven by macroeconomic volatility, rising oil prices, increasing terrorist attacks and generally lower demand. This has been the primary contributor to flat YoY revenues. Given that Delta reports financial and operating performance month to month, it’s no secret that that Q2 results will be disappointing.

The Estimize consensus is calling for earnings per share of $1.58 on $10.54 billion in revenue, 10 cents higher than Wall Street on the bottom line and $50 million on the top. Compared to a year earlier this represents a 35% increase in earnings with sales expected to decline by 1%. Per share estimates have dropped 15% in the past 3 months and should continue to be cut over the next few days. Fortunately, the stock reacts well to earnings, rising 5% in the month following a report. 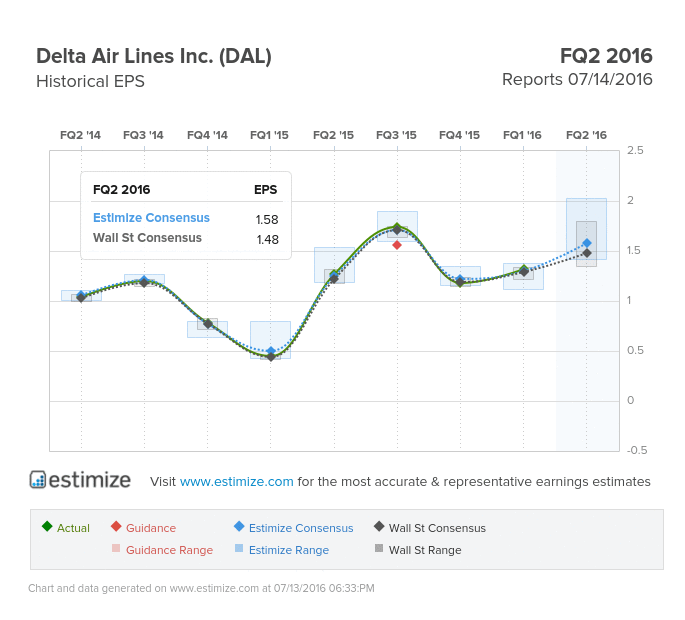 Recent events have been contributed to the decline in the airline industry this year. Terrorist acts around the world, especially those at airports, have scared some from traveling. Furthermore, the Brexit vote last month is expected to have lingering effects on the airline industry. A stronger dollar and weaker foreign currency puts a huge damper on overall revenue growth. Rising oil prices haven’t helped either. The rebound in the oil market in turn impacts price per gallon and negatively influences margins.

Delta has already reported that key metrics have decline in the past 3 months. PRASM (passenger revenue per available seat mile), one of the most important metric for airlines, declined by 5% over the quarter. Delta and its peers have been struggling with holding onto current price levels as excess seating capacity increases and demand for pricey last minute business tickets decline. Delta recently cut its projected operating margin to 17% for Q2, down from previous forecasts in the range of 21 to 23%. 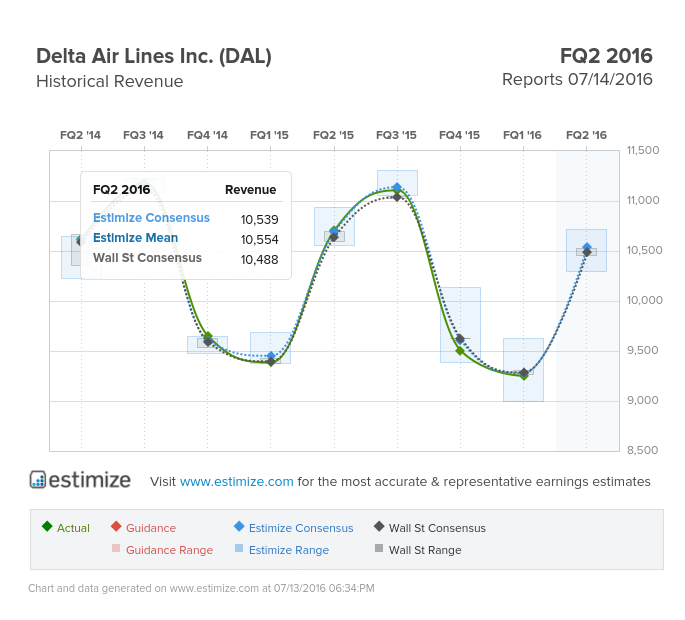 Do you think DAL can beat estimates? There is still time to get your estimate in here!