Cummins (CMI) is not a household name business, but that doesn’t take away from its success.

Cummins is the global leader in diesel engine manufacturing.  The company was founded in Founded in 1919 in Indiana.  Today, Cummins has a market cap of $19.2 billion.

The company has a long history of success.  Cummins has a streak of 25 years of steady or or rising dividends.

In addition, the company is very shareholder friendly and has genrated double-digit shareholder returns over the last decade (discussed in detail in this article).

This article details the compelling investment prospects of Cummins.  The company ranks as a Top 10 dividend growth stock using The 8 Rules of Dividend Investing.

Here’s a look at how those four complementary operating areas contributed to Cummins $19 billion in annual sales: 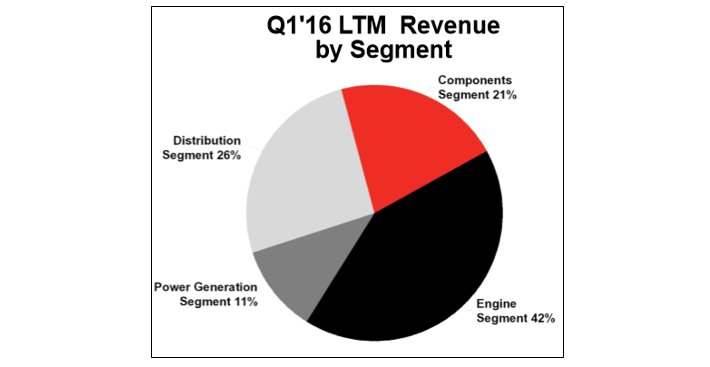 While the engine segment is the largest portion of Cummins business, this is not the company’s highest area of margin. Topping that list is the components segment with a pre-tax margin of over 14%. Then you have the engine segment producing margins around 10%, followed by distribution offering 7% margins and the power generation operation providing 6% total margins.

In the aggregate the company’s pre-tax margin is around 12%, but this is largely driven by components as the other three segments easily trail this mark.

Notably, each segment is itself diversified. For instance, in the engine segment Cummins provides engines to light, medium and heavy-duty automotive customers to go along with construction, agriculture, marine and rail users as well.

Here’s a look at where Cummins does business around the world:

While the company is predominately North American-based, it’s clear to see that the Cummins’ sales are distributed (quite literally) around the globe.

With that background in mind, let’s take a look at how the business and an investment in the security have performed over the years:

This table depicts information moving from fiscal year 2006 through 2015. On the top-line Cummins has had rather solid growth – going from about $11 billion in sales up to $19 billion.

Moreover, the quality of those sales has been improving such that company-wide earnings growth approached a growth rate of nearly 10% per annum. Cummins generated less than $700 million in profits in 2006 as compared to nearly $1.6 billion last year.

If the number of common shares outstanding were to remain the same, you’d see earnings-per-share growth mirror company-wide earnings growth. This was not the case with Cummins. The share count went from around 210 million down to 175 million, resulting in EPS growth of over 11% per year.

Investors received further growth in the share price, as the valuation multiple saw a slight uptick. Interesting, Cummins average historical earnings multiple has been closer to 13 or so, but began and ended the above period down closer to 10 or thereabouts. So the “full effect” may not have played out for shareholders in the way that there was potential to do so. Still, the share price increased by nearly 13% per year.

The starting dividend yield was somewhat unimpressive – beginning around 1%. However, the dividend growth rate has been exceptional.

This was possible for two main reasons: very solid earnings growth coupled with a payout ratio that expanded from 10% of earnings up to 40%. In total the investor of the last decade would have seen annualized gains nearing 15%. As a point of reference, that’s the sort of thing that would turn a $10,000 starting investment into $35,000 or thereabouts after nine years.

Clearly shareholders have been well rewarded in the past. Solid top-line growth was complemented by an increase in the profit margin, a reduction in the number of shares outstanding, an increase in the earnings multiple and a very fast growing dividend. All of these components worked in concert.

Of course past success does not necessitate that future results must be exceptional as well. Let’s think about today’s value proposition in a couple of ways.

Incidentally, Cummins has provided a bit of guidance as to what investors would expect in the coming year:

Using the first and third points, that would indicate anticipated earnings before interest and taxes (EBIT) ranging from $2 billion to $2.2 billion.

As a point of reference, in the last 12 trailing months Cummins had $2.3 in earnings before interest and taxes. So the expectation is that the company is going to earn a bit less this year. And this is reflected in earnings projections, with analysts anticipating future earnings-per-share closer to $8 for the next few years; rather than around $9 as had been the case in the last couple of years.

In order to bake in a bit of conservatism, you could think about what a “no growth” scenario might look like. In this situation, you could suppose that Cummins earns say $1.4 billion in net profits (175 million shares outstanding times $8 in EPS) for each of the next five years.

While the company would not be growing, you would anticipate that a shareholder’s earnings claim could be increasing as a result of share repurchases.

Over the past five years Cummins has averaged roughly $570 in annual share repurchases, without also issuing new shares. Given a similar earnings power today, you might suspect that the company could continue to average say $500 million or so in share buybacks on an annual basis.

Naturally the benefit of this plan depends on the future share price, but over a five-year period this could boost earnings-per-share from around $8 up to $9, and in turn allow for an anticipated share price closer to $120. This isn’t much from the current price around $112, but remember that this is a “no growth” scenario.

Should the dividend grow in-line with earnings, you’d also anticipate receiving $20 or so in dividend payments to boot. That equates to a total anticipated value of about $140, courtesy of capital returns and not an improving business. Expressed differently, based on a “no growth” scenario you might expect your total gain to be in the 4% to 5% range on an annual basis. Not exactly something to text home about, but then again not too bad either considering the lack of business improvement that was anticipated.

There are two basic alternatives that a prospective investor ought to consider: a lesser along with a better scenario. Should you believe that Cummins is in decline and will not gain its prior traction, then an investment today likely would not be attractive to you.

Alternatively, should you believe that 0% company growth is too pessimistic, it’s easy to see that your anticipated gains begin to look attractive rather quickly.

I’ve seen intermediate-term growth rate estimates as high as 12% for Cummins, but let’s use something closer to 5% instead. Here’s a hypothetical scenario of how that could play out:

It should be kept in mind that this is merely a baseline, and one ought to come up with your own expectations prior to partnering with a business. However, it does provide a reasonable demonstration. The previous business “growth bar” for Cummins – solid revenue growth, improving margins and a greatly reduced share count – is rather high. The middle column in the above table provides that historical information as a point of reference. The right-hand column still shows a growth scenario for the coming decade, but not quite as robust as in the past.

If Cummins can grow its revenues at a slower historical rate, slightly increase its profit margin and reduce a lower percentage of shares, you could still be looking at 5% annual earnings-per-share growth. When coupled with a reasonable valuation and a solid starting yield, suddenly you’re looking at annual gains approaching 8%. As a point of reference that’s the sort of thing that could turn a $10,000 starting investment into $21,000 or so after a decade.

And naturally if you expect greater growth your anticipated returns would quickly change from reasonable to rather impressive.

In short, Cummins has displayed an excellent business and investment history over the past decade. Revenues were growing by 6% or so and the earnings of the business were easily approaching and eclipsing the annualized double-digit mark as a result of an increased profit margin and reduced share count. Moreover, shareholders captured all of this performance and more as the valuation increased and Cummins continued to pay a solid and increasing dividend.

Today the outlook isn’t as bright – lower earnings are expected for the next couple of years – but it should also be noted the company operates in a cyclical industry.

However, if Cummins can keep generating a similar level of profits or even grow a bit over the long-term, you could very well be looking at a fair deal – or better.