Just 24 hours after American Express released its quarterly report, Visa is scheduled to announce its FQ3 earnings. Visa and American Express are two of the biggest credit card companies along with Mastercard and Discover. The stiff competition between the companies and the emergence of payment technology has put a burden on Visa. In fact, Visa recently disclosed it had a large stake in the payment processor Square. Unfortunately these initiatives aren’t expected to be enough to accelerate Visa’s slowing growth this quarter

The Estimize consensus is calling for earnings per share of 69 cents on $3.65 billion in revenue, 2 cents higher than Wall Street on the bottom line and $20 million on the top. Compared to the year earlier, earnings growth is projected to be negative with sales growth in the mid single digit range. Overall growth has significantly decelerated from the double digit gains posted in FQ3 2015. Given how poor Visa has reported lately it’s not surprising that analysts are revising both earnings and revenue estimates downward. 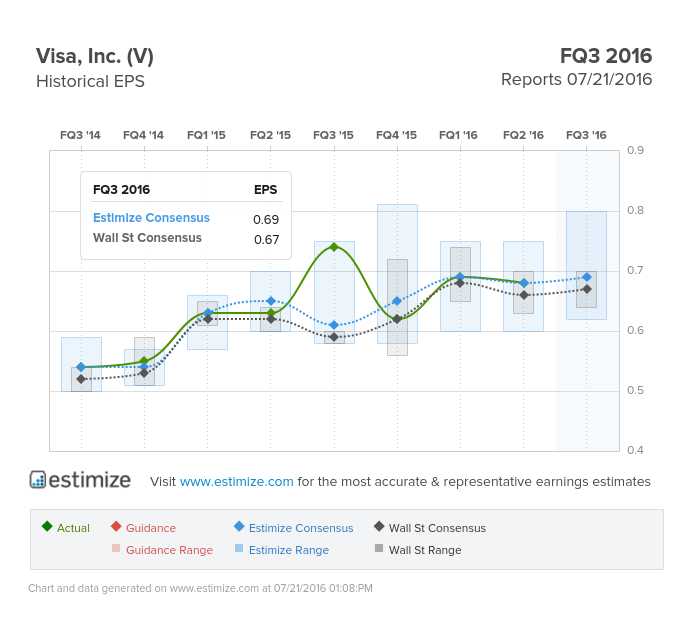 The payments industry is witnessing strong competition as more companies shift towards mobile payments and away from legacy contracts. Some of this includes the emergence of payments app like Square and Venmo but also the increasing adoption of Samsung and Apple pay. Visa’s stakes in Square should help them remain relevant as technology becomes a bigger part of the payments space. Visa has also been in the process of acquiring Visa Europe and recently took over the Costco portfolio from American Express. The stock is up over 10% in the last 12 months, despite relatively muted earnings quarter after quarter.

Some of the biggest concerns for Visa and its peers are on the macroeconomic front. The potential volatility that Brexit may have in store, could send credit card companies in a tailspin. We have already seen currencies plunge against the dollar over the past month with expectations that they may continue to do so for the foreseeable future. This could be an additional obstacle for consumer spending which has struggled as of late. Considering the stock has performed well despite some economic volatility and weak earnings, Visa could be on investor’s short list this season. 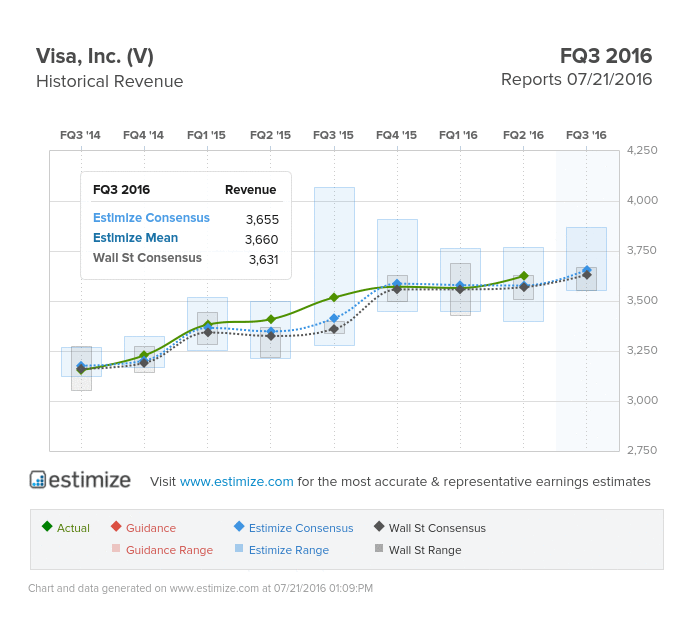 Do you think V can beat estimates? There is still time to get your estimate in here!