In light of the number of times that Tesla Motors Inc (TSLA) has appeared in this blog, I would be remiss if I failed to weigh in on one of the most interesting and important developments at the company – its decision to make an offer for Solar City Corp (SCTY).  The offer has attracted a lot of interest in the financial press and most of it has been negative in the large part because of the drop in price of Tesla on the announcement.  But was it a bad decision of Musk’s part.  That is a subtle, deep and multifaceted question which I hope to explore in several future posts but first to the most basic question – is the offer to high?  To answer that question the place to start is with the market data, so that is the focus of this post.

The actual price that Musk offered was a range 0.122 to 0.131 shares of Tesla for each share of Solar City.  Such stock for stock transactions are more difficult to analyze because the effective cash price being offered depends on the value of the currency (Tesla stock) in which the sellers will be paid.  For instance, the drop in the price of Tesla stock on announcement of the proposed deal (bad for Tesla shareholders) resulted in a reduction in the effective price that would be paid (good for Tesla shareholders).  As a starting point, nonetheless, there is no better initial gauge than a comparison of the market values over time of what Tesla would be paying versus what the company would be getting.   The results plotted below offer support for Mr. Musk.  For most of the last year and half Solar City has traded well above the range he offered (the red band).  More recently, of course, it was less because by definition Mr. Musk would have to offer a premium to convince the majority of shareholders to sell into the deal.  Nonetheless, the premium was not large.  Thus although the deal may have other issues from a valuation perspective it is reasonable, if not attractive. 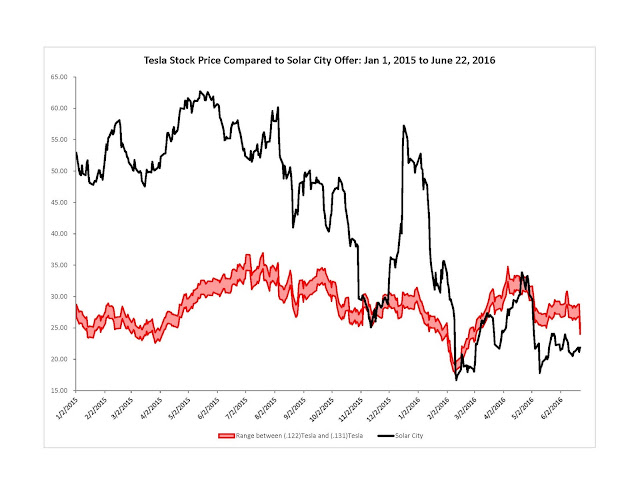