As spring heads into summer across the United States, many Americans may be enjoying a frosty adult beverage. And associated with the purchase of that alcohol, Americans will pay a hefty tax. The taxes collected from so-called sin taxes serve as a major source of revenue for some states. Sin taxes can cover activities from tobacco and alcohol to casino and racing gambling.

We decided to visually break down the amount of revenue that states generate from sin taxes on a total tax revenue basis, as well as examining the amount of revenue generated by the category of “sin taxes”. States collected over $32 billion in sin taxes in 2014. As political pressure mounts to keep income and property taxes low, state legislatures have often turned to sin taxes to generate more revenue. Experts note that states have raised taxes on tobacco products 111 times between 2000 to 2015. 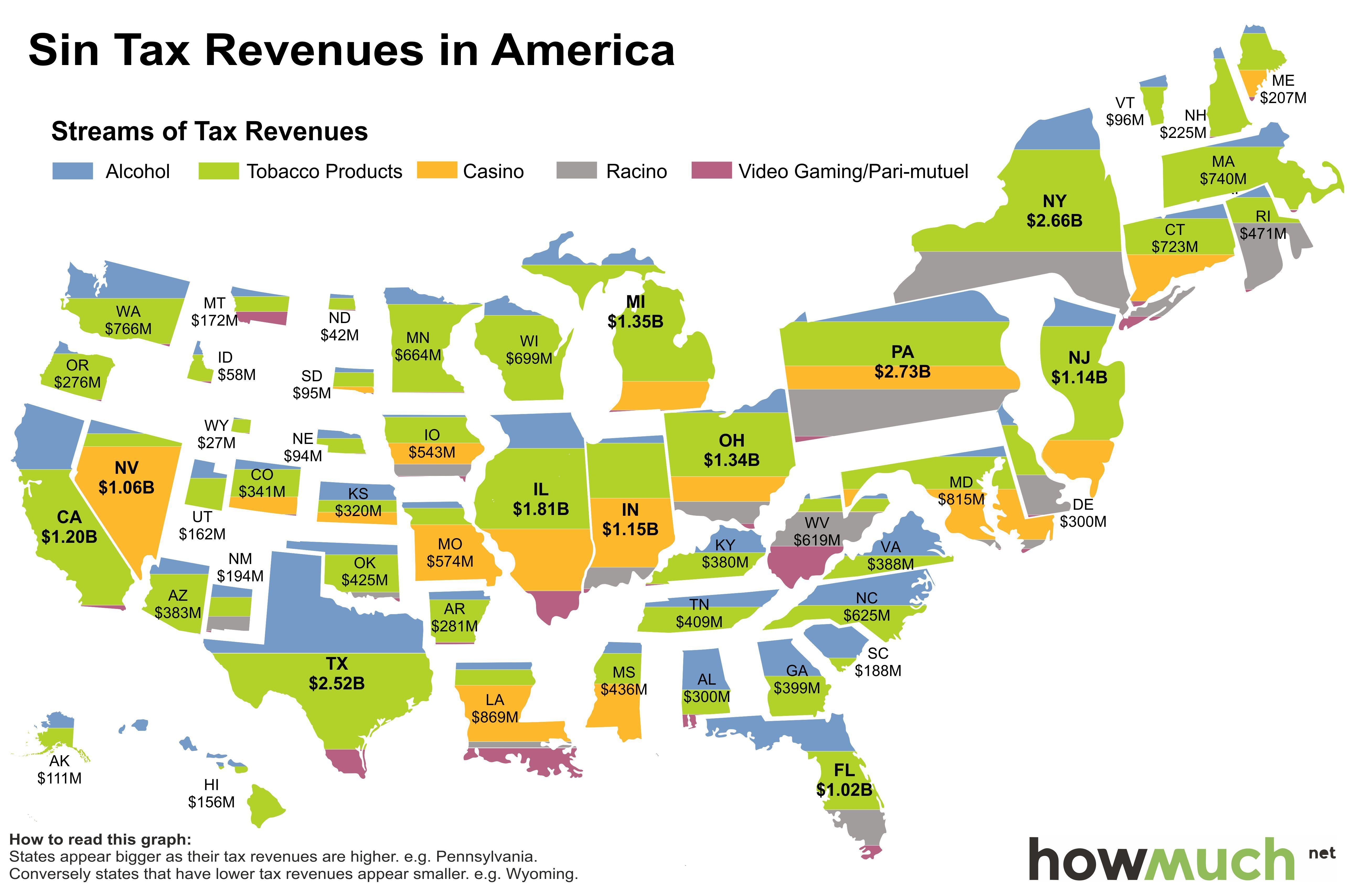 Eleven states collected over $1 billion from sin taxes. These states are identified by the darkest color on the visualization above. Pennsylvania led the way with $2.7 billion in sin tax revenues.  The Keystone state generated over $1 billion from tobacco revenue alone, one of only three states to do so. This was followed by revenue from racino in excess of $770 million and casino revenue of $575 million.

Pennsylvania is closely followed by New York with around $2.65 billion in sin tax revenue. Close behind in third was Texas with $2.51 billion in sin taxes. The other eight states in excess of $1 billion were Nevada, Indiana, Illinois, Ohio, Michigan, New Jersey, Florida and California.

At the bottom end of the scale, Wyoming had the lowest amount of “sin tax” revenue with only $26 million. North Dakota was in second place with only $41 million.

Taxes on tobacco products is a major source of sin tax revenue. As stated previously, only three states generated in excess of $1 billion in revenue from tobacco. New York took in the largest amount of tobacco taxes with $1.446 billion, in a virtual dead heat with Texas who also took in $1.446 billion. Pennsylvania generated the third largest amount of tobacco revenue at $1.028 billion. On the lower side of the scale, Wyoming only collected $24.4 million in tobacco. South Carolina was the second lowest with only $25 million generated from taxes on tobacco.

Another major category of sin taxes is alcohol. As shown by the visualization, Texas was the only state to generate over $1 billion in revenue from alcohol. The next closest state in a distant second was Florida with $452 million. New York was third far behind Florida with only $250 million in alcohol tax revenue. Wyoming saw the lowest amount of revenue with only $1.8 million from alcohol.

Only certain states allow casinos, thus geographically limiting the amount of revenue generated in this category. Not surprisingly, Nevada led the country in casino taxes with $912 million. The home of Las Vegas, casino revenue is a major source of income for the state. Pennsylvania was in second with $575 million in casino tax revenue. West Virginia was lowest in the category and only saw limited casino revenue of $3.8 million.

Another category with limited participants is revenue from Racinos. The combination of race tracks and casinos generated $937 million for New York, first in the category. This was followed by Pennsylvania with $770 million. Rhode Island followed in third with $318 million. Oklahoma was in last place with only $20 million in racino tax revenue.

The final category of sin taxes is revenue from video-gaming/pari-mutuel activities, generating fairly low revenue overall. West Virginia led the country in this category with $204 million collected. This was followed by Louisiana with $182 million. Illinois was in third with $152 million.

As states continue to grapple with ever-tightening budgets, it is nearly certain that state legislatures will continue to raise sin taxes. Sin taxes are an easy way for states to increase revenue without running into significant political opposition. However, the benefit of ever increasing sin taxes is questionable. Some academic studies have pointed to sin taxes as having limited revenue growth and high costs to enforce. The debate over sin taxes is certain to continue during the election year.