ValueWalk
Home Technology Is Blackberry Closing in on Apple’s Dominance?

Is Blackberry Closing in on Apple’s Dominance?

Company managements looking to achieve earnings growth often default to cost cutting, stock buyback, accounting gimmicks and other methods. But there is another way. More often than not, managements overlook pricing as a driver of earnings growth. Pricing power can be an effect way of boosting a company's bottom line.           Read More

It was only a few years ago that Blackberry was on the verge of irrelevance but with a new phone and operating system the company has started to gain traction once again. However, it won’t be Blackberry’s hardware business that supports its rebound, but its software business. The company’s software and enterprise division is emerging as the biggest driver of earnings. Expectations this quarter are still trending lower, with revenue projected to decline steeply from a year earlier.

The Estimize consensus is looking for a loss of 5 cents per share on $477.40 million in revenue, 3 cents higher than Wall Street on the bottom line and $10 million on the top. Compared to a year earlier this represents a projected 3% decline in earnings with sales falling as much as 27%. The stock typically reacts negatively to earnings which continue to fall short of expectations. Shares are now down 24% in 2016 and could fall further if tomorrow’s results are investors are disappointing. 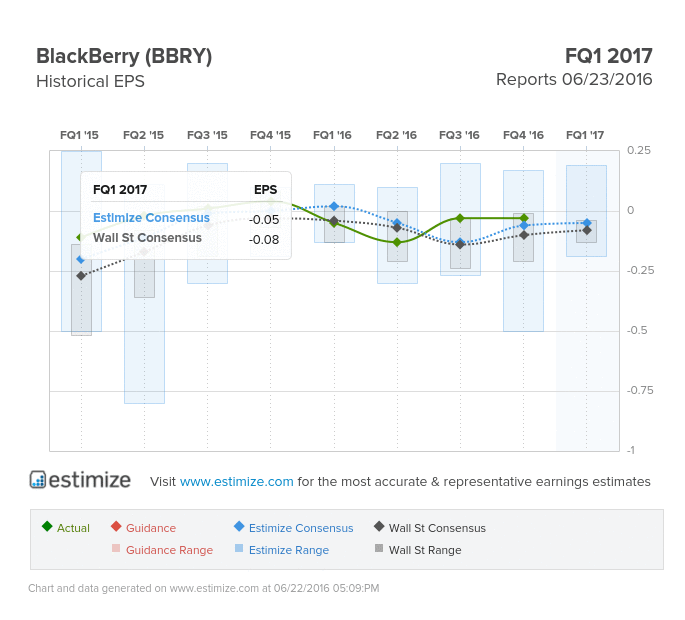 Blackberry is best known for its handsets which were perhaps one of the earliest iterations of the smartphone. However, the days of those handsets driving bottom-line growth have, for the time being, come to an end. After debuting the Blackberry Priv late last year, it continues to struggle to acquire adopters. The smartphone market is nearing saturation with many consumers strictly tied to the iPhone or Samsung phones. Blackberry’s move away from its native operating system to Android in its devices has yet to pay off. If Apple can’t navigate out of the current smartphone landscape then it’s highly unlikely that Blackberry will break through the stagnation.

On the plus side, Blackberry’s software business has been a key driver of earnings. The company has been rapidly expanding to build brand recognition in this sector. The surge in the Blackberry enterprise offering was quite strong last quarter. The company added about 3,600 enterprise customers over Q4 with a total of 10,000 orders in fiscal 2016. Almost 70% of this revenue is recurring from previous quarters, so it isn’t going anywhere any time soon. Q1 will also be the first full quarter since Blackberry agreed to acquire Good Technologies, which should provide a nice bump on the top line. 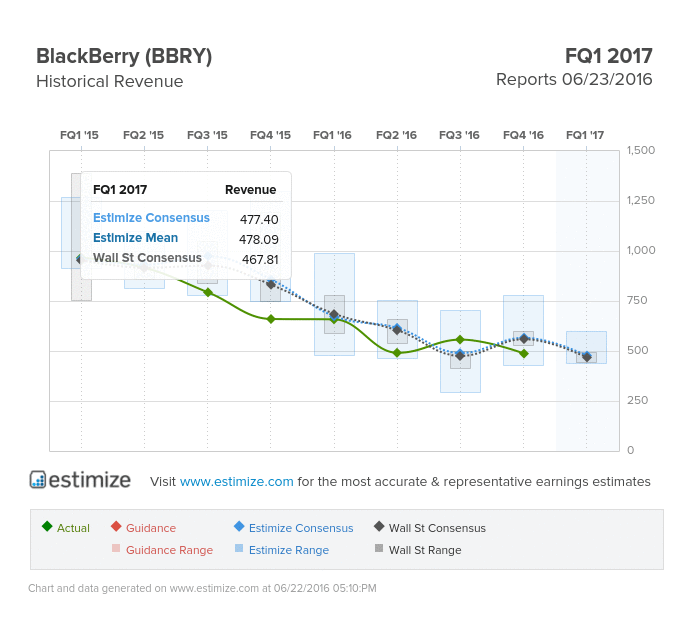 Do you think BBRY can beat estimates? There is still time to get your estimate in here!