Whole Foods is scheduled to report second quarter results tomorrow after the market closes. Despite a nice beat last quarter, earnings over the past 2 years have been quite volatile as organic grocers become a dime a dozen. This month Whole Foods will open its new 365 stores as part of its continuing efforts to cater healthy food to everyone and rid itself of its high price reputation. General fears are that the 365 stores will cannibalize Whole Food’s core business rather than confront competitive threats from the likes of Sprouts, Kroger and even Trader Joe’s. While the new stores will have no bearing, investors will be interested in sales guidance for these new stores moving forward.

Unfortunately, this quarter is expected to be characterized by slowing comp sales and margin contraction largely in line with past trends. The Estimize consensus is looking for earnings per share of $0.42 on $3.75 billion in revenue, 1 cent higher than Wall Street on the bottom line and right in line on the top. Per share estimates have increased 8% since Whole Food’s last report but still reflects a 2% year over year decline. Revenue on the other hand is predicted to increase 3%. 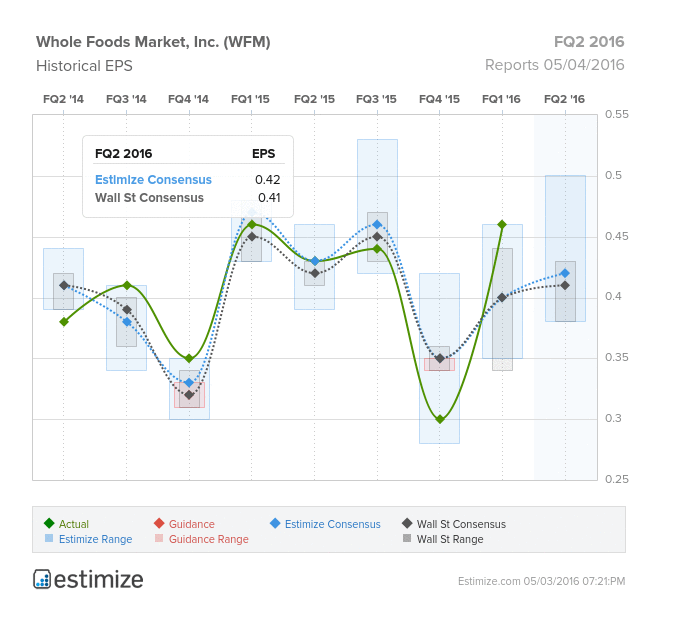 Whole Foods is coming off a better than expected first quarter where it beat on both the top and bottom line. Revenue grew almost 3.5% and broke a twelve quarter streak of missing expectations. However, comps fell 1.8% while the number of transactions declined 1.6% and basket size decreased 0.2%. Estimates for Q2 suggest comps might fall as much as 3%. In the first three weeks of this quarter, comparable store sales have already declined 2.8%.

Moving forward, Whole Foods is focused on opening new Whole Foods and 365 stores. This year, the company plans to open 30 new stores, comprising three 365 stores and two to three store relocations during fiscal 2016. The company believes that there still exists room for 1,200 new stores in the long run. In the meantime, Whole Foods faces threats on all sides. Whole Food’s core business has come under pressure from stiff competition, and accusations of being overpriced, as demand from value-driven consumers wanes. 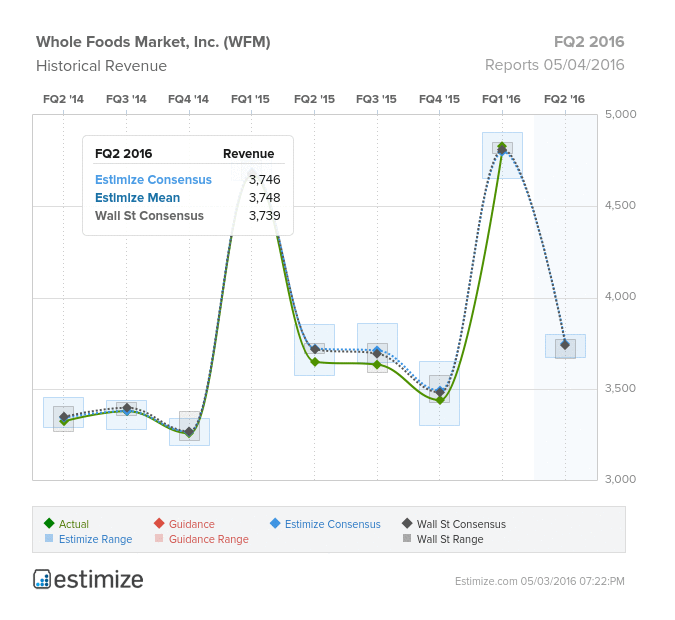 Do you think WFM can beat estimates? There is still time to get your estimate in here!