The brainchild of Elon Musk, Tesla, is scheduled to report first quarter earnings Wednesday after the market closes. Tesla is one of the most highly anticipated results and after the debut of the Model 3, this quarter becomes that much more interesting. Given its track record investors will be anxious to learn whether the new vehicle will make Tesla profitable.

The Estimize consensus is calling for a 53 cent loss per share coupled with revenue of $1.6 billion,1 cent higher than Wall Street on the bottom line and $17 million on the top. Since Tesla’s last report, per share estimates have been cut 308% with profits now forecasted to fall 31%. Revenue on the other hand is expected to increase 46% from a year earlier. On average the stock remains relatively unscathed during earnings season but can increase as much as 8% 30 days following its report. 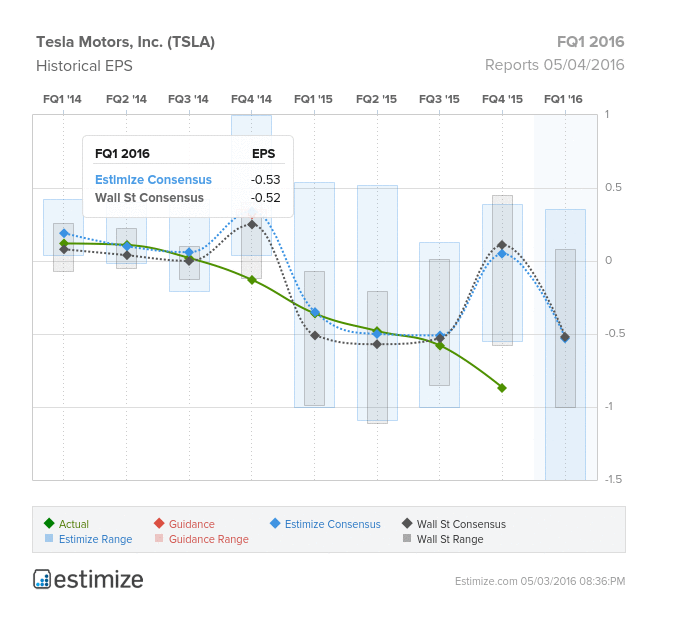 Tesla is not only an industry leader amongst electric cars but also the automotive industry as a whole. Last year, the Model S was both one of the best selling electric vehicles and premium sedans with total delivering increasing 37% from 2014. Thanks to the success of the Model S, Tesla recently debuted its new cost friendly Model 3. In just 3 days after it was announced, preorders reached 275k and is now closing in on 400k orders.

For years now, Tesla has also focused on expanding its operations overseas. The company began delivering the Model S in Europe in 2013 and China in 2014, Australia in 2014, and Mexico in 2015. This year, Tesla plans to introduce the Model 3 in India, Brazil, South Africa, South Korea, New Zealand, Singapore, and Ireland. Furthermore, the company plans to move production to China over the next 2 years in an effort save on import taxes.

Despite the success of its vehicles, there is much to be desired with Tesla’s finances. Over the past few years the company has perpetually burned cash and relied heavily on government subsidies. Though sales are increasing, the company has reported a loss in each of the past 4 quarters. Fiscal 2015 produced a net loss of $888.7 million, a 67% increase from 2014, with total long term debt rising to $2.674 billion. 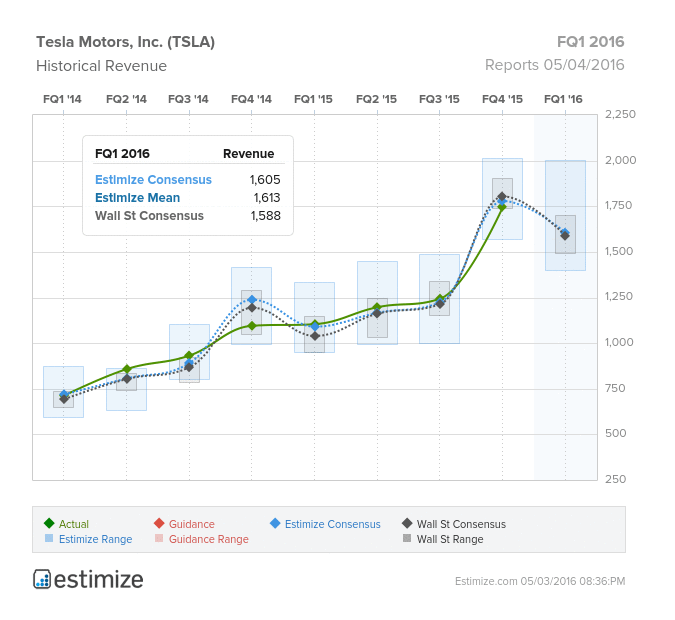 Do you think TSLA can beat estimates? There is still time to get your estimate in here!