Consumer Discretionary – Automobiles | Reports May 4, after the close.

Tesla Motors Inc – Estimize calls for EPS of -$0.51, 1 cent higher than Wall Street, while revenue estimates of $1.60B are just slightly above the sell-side’s $1.59B. The Tesla Motors Inc crowd has been bearish on Tesla’s profitability, moving EPS estimates down 326% since the Q4 report, now expecting earnings to decline 10% on a YoY basis. Revenue estimates have also been ratcheted down by 8%, but are expected to grow 47% from the year-ago period. On average Tesla has only beaten the Estimize EPS consensus 31% of the time, but the stock moves up 8% on average in the 30-day post report period. 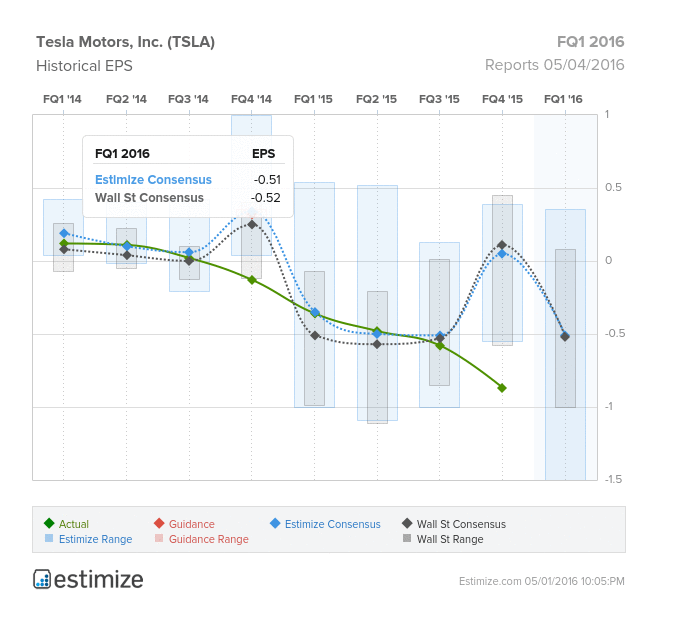 What to Watch: Last year Tesla Motors Inc delivered a record 50,000 vehicles but failed to meet volume expectations the company set earlier in the year. The company guided for 80,000 – 90,000 deliveries of their Model X and Model S in 2016, but is well known now for being overly optimistic when providing its yearly outlook. The mass-market Model 3 which TSLA plans to begin selling in 2017 for under $35,000 already has 400,000 preorders. While that sounds like great news,  there is growing concern around whether or not they will be able to deliver. The company is still aiming to scale production up to 500,000 vehicles per year by 2020, and is now on the hook to deliver 400k of one model, with production starting next year. Not only does the Model 3 come with lower margins, but adding a third model to it’s lineup is sure to keep Tesla’s profits in the red for the foreseeable future. Operating expenses currently account for almost 50% of the company’s revenue. Tesla has already made large investments in launching its first SUV and building out a sustainable battery. As production ramps up for each of these models, energy credits from green technology are expected to shrink proportionally to sales growth. Investors are more likely interested in forward-looking guidance out of Tesla on Wednesday, than Q1 results.

Consumer Staples – Food & Staples Retailing | Reports May 4, after the close.

The Estimize community calls for EPS of $0.43, two cents above Wall Street. Revenue expectations from Estimize are also higher at $3.748B as compared to the Street’s $3.739B. EPS estimates have increased 11% in the last 3 months, but growth is still expected to be down 2% YoY. The revenue consensus has stayed flat over this period, anticipated to grow slightly at 3% YoY. The company doesn’t have a very good record of beating, only surpassing the Estimize consensus for EPS 41% of the time, and for revenues 6% of the time. 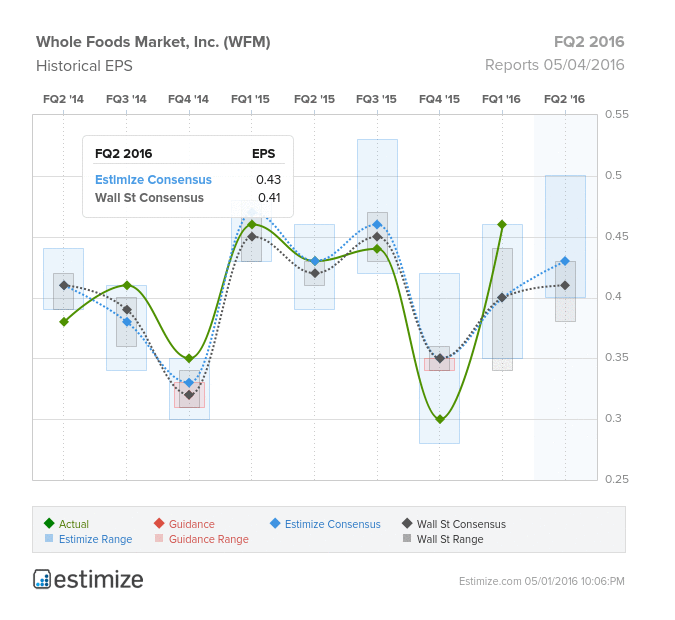 What to Watch: Fiscal 2015 was a rough year for Whole Foods, missing or meeting on earnings and revenues every quarter. Fiscal Q1 2016 started to see a turnaround, however, with a 6 cent beat on the bottom-line and a $30M beat on the top-line. Same store sales, one of the most important metrics to consider with the retailers, came in at -1.8% in the latest quarter, a testament to stiff competition in the organic and natural foods space. In hopes of shedding it’s “Whole Paycheck” title, the company will be launching a value-focused chain under the name of its “365” store brand in order to target a larger demographic, mainly millennials. The first three store locations are slated to open this summer in CA, OR and WA, with up to an additional 10 stores opening in 2017. This is in an attempt to stay competitive with other brands such as Wal-Mart, Kroger and Target which are starting to offer organic items at more competitive prices.

Information Technology – Electronic Equipment | Reports May 4, after the close.

The Estimize consensus calls for EPS of $0.07, four cents above Wall Street and a six above company guidance. Revenue expectations are also more bullish at $451.34M vs. the sell-side’s $439.15M and guidance of $430M. However, these numbers have been trending downward since the last quarterly report, with EPS estimates falling 75% and revenues down 15%. This puts growth expectations at -69% for EPS, yet sales are expected to increase 35%. This is a company that has beaten both the Estimize and Wall Street consensus on the top and bottom-line in both quarters since IPOing in June. 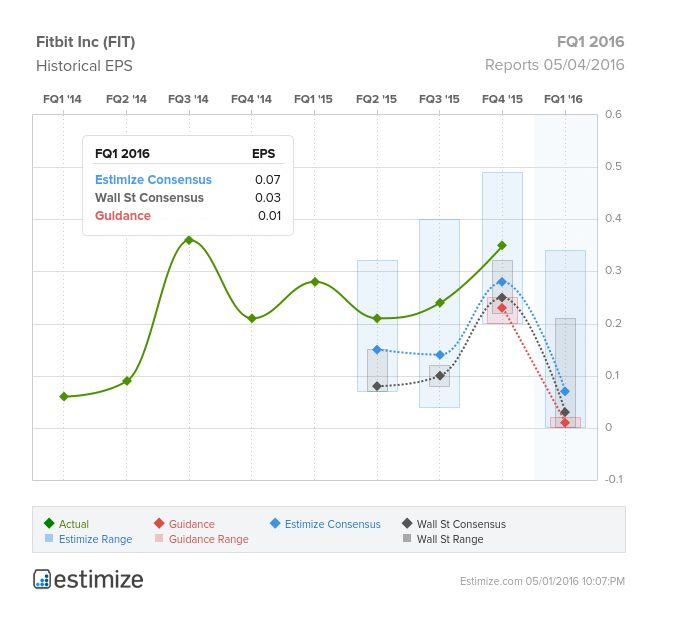 What to Watch: Since IPOing last summer, shares of Fitbit have been slashed by nearly 40% as investors worry about competition from Apple which released the first iteration of their watch just months prior. The concerns around Fitbit’s fitness trackers have always been their niche position in the health and wellness sporting goods category, and the debate as to whether or not they are a must-have product. Attrition rates have also been worrisome, of the 15M or so trackers sold, only half are in active use. However, with Apple’s dismal report last week, the competition concerns could be overblown in the short-term, or at least until the next generation of the Apple Watch is released. In fact, research firm IDC showed that for the holiday quarter 2015, Fitbit was the largest seller of wearable devices at 8.1 M vs. Apple which came in second place at nearly half that rate or 4.1M. Fitbit’s two new watches, the Blaze and Alta, which just started shipping in March, have already sold over 1 million units each. Another area in which FIT is winning is with enterprise customers, adding over 1,000 corporate buyers in 2015.

Information Technology – Computers & Peripherals | Reports May 5, after the close.

The Estimize consensus calls for EPS of -$0.55, three cents above Wall Street. Revenue expectations of $171.6M are just slightly higher than the Street’s $169.6M. Numbers on the bottom-line have been ratcheted down 899% in just the last 3 months, with top-line numbers reduced 49%. This puts growth expectations at -302% for EPS and -48% for sales. In the nearly 2 years since going public, GPRO has beaten the Estimize EPS consensus in 57% of quarters, and revenues 71% of the time. 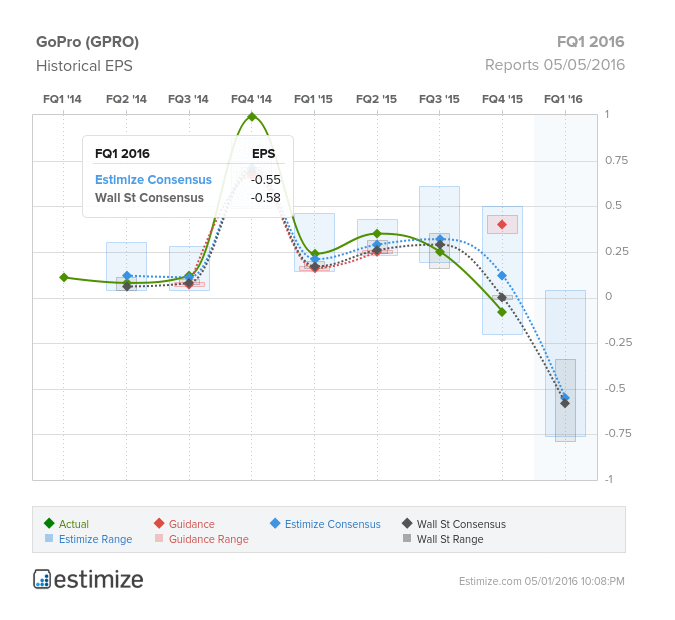 What to watch: Once a favorite of Wall Street, GoPro’s stock has fallen nearly 75% in the last year on weaker demand and an economic slowdown in China. Just last Monday shares tumbled once again after analysts at Pacific Crest lowered expectations for 2016 and 2017 EPS and revenues, as well as average selling price (ASP) expectations. The action camera space has become increasingly crowded and commoditized, with peers such as Sony and Xiaomi putting pressure on GoPro. The company’s target market has become saturated with cheaper and more innovative products, severely hurting its bottom line. The $400 HERO4 camera has consistently missed sales forecasts, leading to steep price cuts to spur demand. Investors are holding out hope that GoPro’s Karma drone, set to launch later this quarter, is the product that can resuscitate the company. It still remains to be seen how several recent acquisitions of smaller companies such as Kolor, which produces 360-degree videos, and video editing startups Stupeflix and Vemory, can help the company diversify their business.

Information Technology – Internet Software & Services | Reports May 5, after the close.

The Estimize consensus calls for EPS of -$0.15, one penny above Wall Street. Revenue expectations of $155.9M are just slightly higher than the Street and company issued guidance. Numbers on the bottom-line have been revised down 316% in just the last 3 months, with top-line numbers only being reduced 2%. This puts growth expectations at -565% for EPS and 31% for sales. Despite low expectations, this is a stock that historically increases 5% in the 30-day post earnings period. 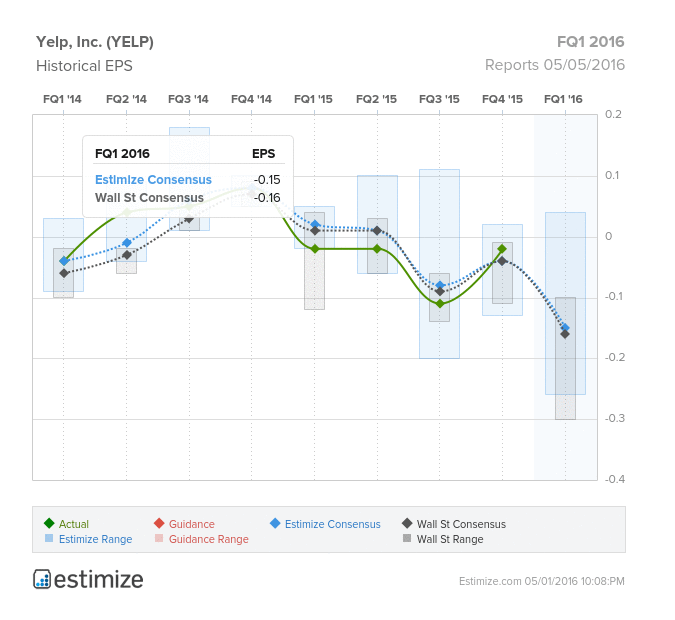 What to Watch: Since the launch of Facebook’s Services platform, Yelp shares have fallen 22%. While Yelp is still the most highly used platform for crowdsourced business reviews, Facebook’s review system eliminates internet anonymity typically associated with a Yelp rating. Moreover, Yelp faces diminishing web traffic which doesn’t bode well for ad revenue, partially due to the separation from key partner, OpenTable. Yelp generates a majority of its traffic from two main engines: its mobile app and Google. While the mobile app has performed remarkably well so far, its presence in Google and other search engines have declined. To remedy this issue, Yelp intends to increase marketing investments to $50 million in 2016, from $30 million last year which will hopefully help offset churn rates. Morgan Stanley estimates that roughly 50% of Yelp’s current ad-buyers will not purchase ad units in the next 12-months.

How do you think these companies will perform? Get your estimates in here!