Pro Forma Earnings vs. GAAP – SEC Do Your Job

It looks like the SEC is finally ready to put a stop to accounting shenanigans.

The Securities and Exchange Commission is finally going to do its job and put a stop to the accounting hanky-panky that artificially inflates profits.

According to Dow Jones, the SEC is getting ready to step up its scrutiny of companies’ “homegrown earnings measures,” signaling it plans to target firms that “inflate their sales results and employ customized metrics that stray too far from accounting rules.”

Pro Forma earnings are when you adjust for unusual, non-recurring, one-time expenses. Examples:

•    Minus or “ex” one-time costs associated with a takeover

•    Minus or “ex” one-time costs of currency losses

But corporate America’s creative use of Pro Forma accounting rules has made them appear more prosperous than they really are—because the use of “extraordinary items” and “non-cash charges” has turned corporate earnings reports into a bag of lies.

So, the SEC is waking up to the misleading picture that pro forma earnings—compared to generally accepted accounting principles, or GAAP—generate. Now the commission is launching a campaign to crack down on made-to-order earnings.

Mark Kronforst, chief accountant of the SEC’s corporation finance division, said, “The point is, now the company has created a measure that no longer reflects its business model. We’re going to take exception to that practice.”

The Impact of an SEC Crackdown

So what will the SEC do? According to the Dow Jones article:
The agency plans to issue comment letters in the coming months that critique firms that booked revenue on an accelerated basis. Mr. Kronforst, who plans to speak Thursday at a Northwestern University legal conference about the issue, declined to name them.
Mr. Kronforst said regulators also plan to challenge companies that report their adjusted earnings on a per-share basis. The results are often higher than per-share GAAP earnings and look too much like measures of cash flow, which decades-old rules prevent from being presented on a per-share basis, Mr. Kronforst said. That is because investors could confuse cash flow with actual earnings, which truly represent the amounts that could be distributed to investors.
“We are going to look harder at the substance of what companies are presenting, rather than what the measures are called,” he said.

In other words, the SEC is finally going to do its job!

To see the impact of such a crackdown, all you have to do is take a look at the growing difference between GAAP profits and pro forma profits. 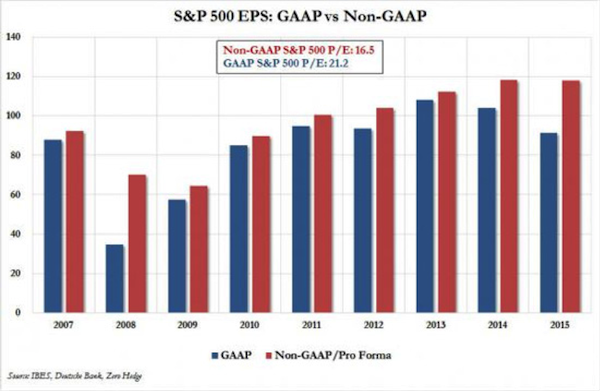 Yes, my bear market radar is on high alert, and the new SEC scrutiny could be just the thing that knocks the bull market off its feet.