Amazon No Longer Has the Upper Hand on Walmart

The world’s largest retailer, Wal-Mart, is scheduled to report earnings tomorrow, before the market opens. Retail has been largely disappointing this season and with Target missing their estimates this quarter, Walmart might be in for a world of hurt. Earnings and revenues have been mixed for quite some time as wage increases, currency headwinds, and fierce online competition take their toll. The holiday season featured better than expected earnings per share while revenue fell short. This has been a consistent theme in the retail sector and should resonate with Walmart this quarter.

The Estimize consensus is calling for earnings of 89 cents per share on $112.73 billion in revenue, 1 cent higher than Wall Street on the bottom line and right in line on the top. Compared to a year earlier this represents a 13% decline in profitability with sales falling as much as 2%. On average the stock remains relatively unchanged around earnings season. Shareholders will have to look elsewhere to reconcile the 20% losses the stock have experienced in the last 12 months. 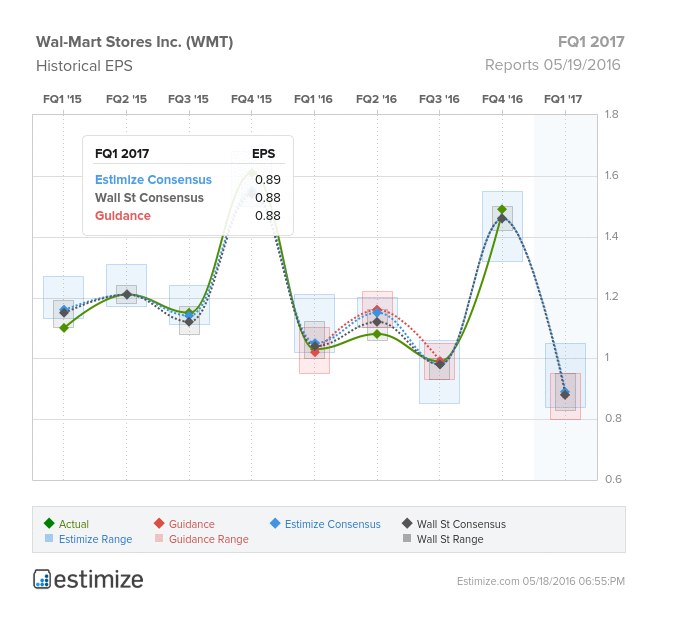 It’s no secret that Walmart’s business model as a discount retailer is slowly eroding at the hand of Amazon. Amazon continues to be Walmart’s biggest threat and is showing no signs of retreating anytime soon. In an effort to fend off online rivals and even brick and mortar retailers such as Costco, Wal-Mart has invested heavily to improve the customer experience, lower prices and boost ecommerce sales. This is expected to push profits down 12% this fiscal year, which is particularly concerning considering operating income decreased 11.2% in FY2016.

Despite the slew of problems, Walmart has consistently delivered positive comparable sales. Last quarter comp store sales increased 0.5%, marking the 5 consecutive quarter of gains. One thing Walmart has over Amazon is that it’s essentially a one stop shop for all of a consumer’s needs. Most stores now include a pharmacy, grocery store, gas station and everything a typical department store would sell. Walmart has also bolstered its online channels and recently launched a two-day shipping service similar to Amazon Prime. On a constant currency basis online sales and gross merchandise value made double digit gains last year and should continue to be a source of growth.

In the near term, weak spending habits, currency headwinds, and Amazon’s growing presence should remain a threat to earnings. 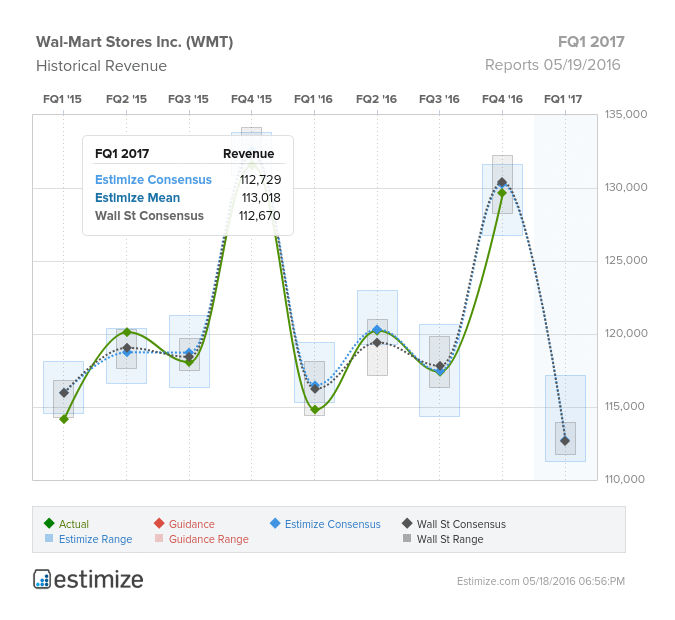