This week our office was visited by my friend, investor and author Gianni Kovacevic, who is at the halfway point of a cross-country book tour to promote the latest edition of “My Electrician Drives a Porsche?” As part of the tour, he’s driving a Tesla Motors   Model S from Boston to Palo Alto, California—Tesla’s hometown—to demonstrate the potential of green energy and spread his message that “the future is now.”

His book features a successful young man—the titular electrician, and an analogue of Gianni himself—who instructs his older family doctor on how to invest in the rise of the new spending class. Not only is “Electrician” a fact-filled, convincing treatise on the importance of following long-term trends in China, copper and other “financial soap operas,” it’s also a real page-turner. I urge you to grab a copy and check it out.

Central to the book’s thesis is a concept that is both simple and yet profound: As the size of the world’s middle class continues to grow, demand for “things that come with an electrical cord” will surge. Below is a brief excerpt:

My point is that once a group of people make the move from rural to urban, from peasant to worker and on to consumer, their way of life changes. Subsistence disappears from their vocabulary and their lives begin to revolve around the three Cs: comfort, convenience and communication. And in order to achieve any of those things, it takes a whole lot more stuff than ever before. We get a dishwasher to free up time and a television to waste it. We get an air conditioner to stay cool and a heater to stay warm. Then later on, we get other luxuries like solar panels on our roofs and newer, more modern cars. When a society achieves its very own consumer revolution, as China and the developing world are undergoing right now, life becomes less about needs and more about wants. With an unprecedented number of new consumers, these luxuries need way more stuff to make them possible.

Back in 2014, Microsoft founder and philanthropist Bill Gates predicted that by 2035, there will be “almost no poor countries left in the world.” You might scoff, but for a moment let’s imagine this turns out to be the case. What effect would that have on energy demand? Millions more people joining what Gianni calls the spending class will increase the demand for millions more things—dishwashers, air conditioners, smartphones, cars—and necessitate the production of thousands more megawatts of electricity than the world currently generates.

All of which is a boon for copper. However energy is produced, the red metal is needed for conductivity. In fact, even more copper wiring is used in new energy technologies than in traditional sources. An electric car such as the Tesla Motors  Model S uses three times as much copper wiring than an internal combustion engine vehicle.

It was reported this week that China imported 39 percent more copper (and 13 percent more crude oil) in March than in the same time last year, a sign that the Asian giant’s appetite for commodities and energy remains strong. Despite a slowdown in GDP growth, China is still the number one importer of metals and number two consumer of oil.

Shipments out of China also rebounded the most in a year, rising 11.5 percent in the first quarter. This suggests its economy fared much better than what analysts were predicting. 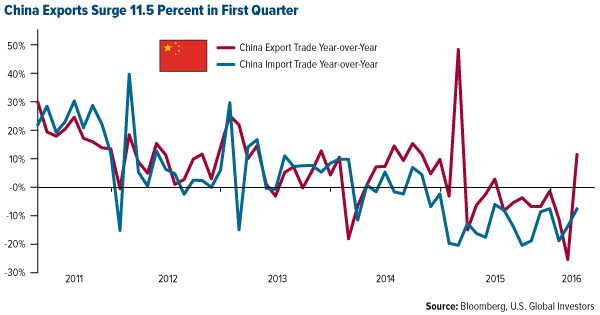 The country’s manufacturing industry saw very welcome improvement last month as well, with the purchasing managers’ index (PMI) coming in at 49.7—still below the key 50 threshold, but the highest reading since February of last year. The PMI was also above its three-month moving average for the first time since October. 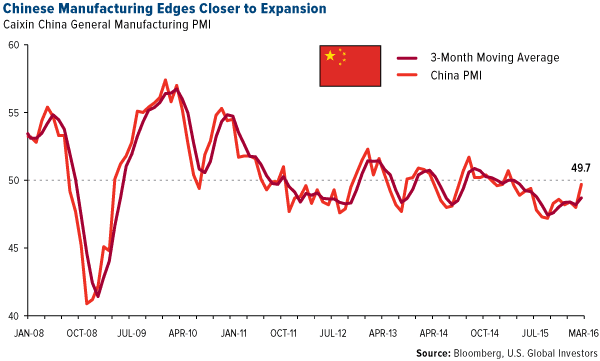 The Rise of the Chinese Spending Class

Consider the dramatic difference in size between college graduates in older and younger Chinese generations. According to Gianni’s book, there are 160 million people aged 56 to 65, yet this cohort has only one million graduates. Meanwhile, millennials are 415 million strong—100 million more than the entirety of the U.S. population—and of those, 107 million have college degrees. So far. As this number rises, so too will incomes as well as the desire to live a more “Western” lifestyle filled with stuff. 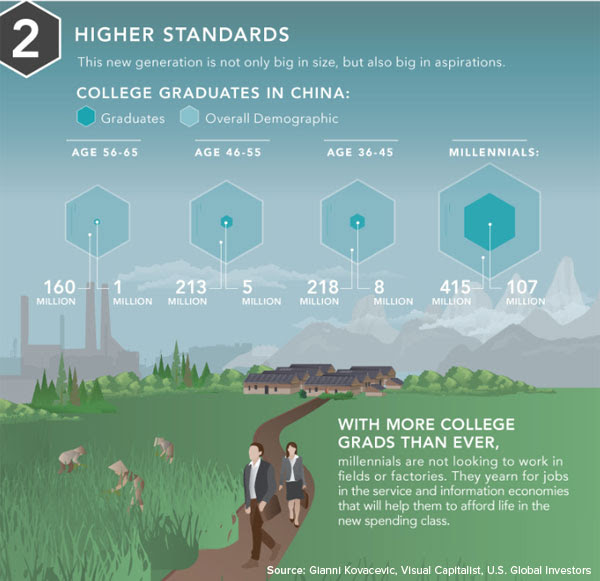 You can check out the entire Visual Capitalist infographic on Gianni’s website.

The Asian country’s middle class is already larger than America’s. In October, Credit Suisse reported that there are more than 109 million middle-class consumers in China, compared to 92 million in the U.S. 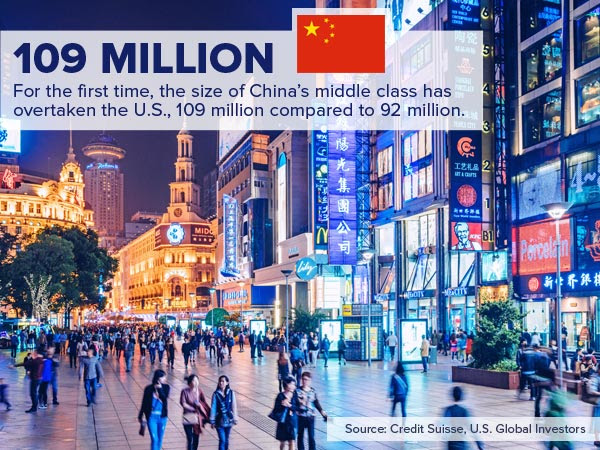 Indeed, domestic consumption in China is following a staggering upward trajectory. In 2015, total retail sales touched a record, surpassing 30 trillion renminbi, or about $4.2 trillion. By 2020, sales are expected to climb to $6.5 trillion, representing 50 percent growth in as little as five years. This growth will “roughly equal a market 1.3 times the size of Germany or the United Kingdom,” according to the World Economic Forum. 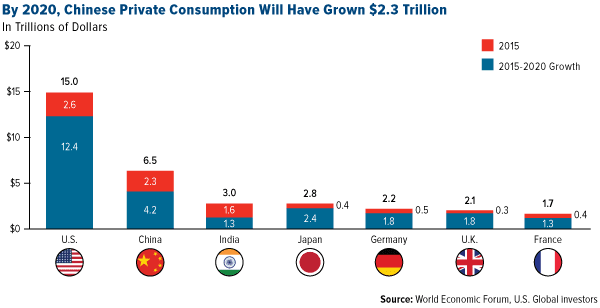 The new Chinese spending class is still very concentrated along the country’s highly-urbanized eastern coast, in megacities such as Shanghai, Beijing, Guangdong and Shenzhen. But this is changing rapidly, with39 percent of middle-class growth shifting inland toward more rural areas by 2022, according to McKinsey & Company. This will introduce new investment opportunities as these areas will require modern roads, railways and—most important—energy infrastructure. 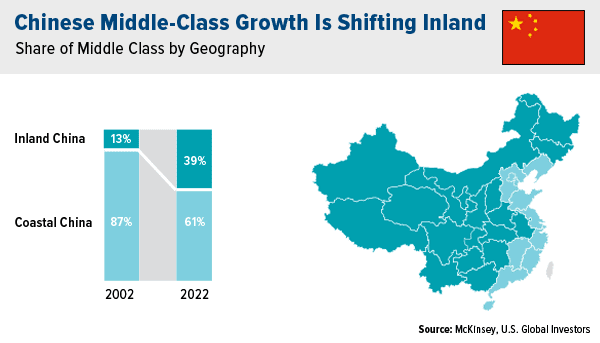 It’s estimated that between 2010 and 2025, 300 million Chinese citizens—a little less than the entire population of the U.S.—will migrate from rural areas to cities. As Gianni points out, lifestyles drastically change when this occurs, shifting from one of subsistence to one that revolves around convenience and comfort.

Key to this migration is transportation. In 1979, there were only 60 privately-owned automobiles in China. (That’s according to a 2006 report by legendary Canadian investment strategist Don Coxe, and cited in “My Electrician Drives a Porsche?”) Fast forward to today and China is now the world’s largest auto market. More than 21.1 million passenger cars were sold in the country last year, a 7.3 percent increase from 2014. Compare that to the U.S., the number two car buyer, where sales totaled 17.5 million, an all-time record.

By the way, 2015 sales of the Toyota Corolla, one of the top-selling sedans in the U.S., were a little over 350,000. That’s slightly more than the number of preorders for the Tesla Motors Model 3, the company’s first mass-produced vehicle, within a single week of its unveiling on March 31. In a blog post, Tesla Motors  promptly proclaimed it “the week that electric vehicles went mainstream.”

The future, as Gianni says, is indeed now.