There are more than 140 private tech start ups with valuations of > $1bln, the metric for “Unicorn” status. The typical exit for start ups, regardless of the number of funding rounds they have successfully completed, has traditionally been via Initial Public Offering (IPO). The Q1 2016 IPO market has been as dry as a popcorn fart. No issues in January (1st time since September 2011) and the quietest quarter logged since awful 2009.

As the following chart form the venerable JP Morgan brilliantly shows, unicorns are more shy than we would have guessed, preferring the relative comfort of the private markets (with only a couple of exceptions): 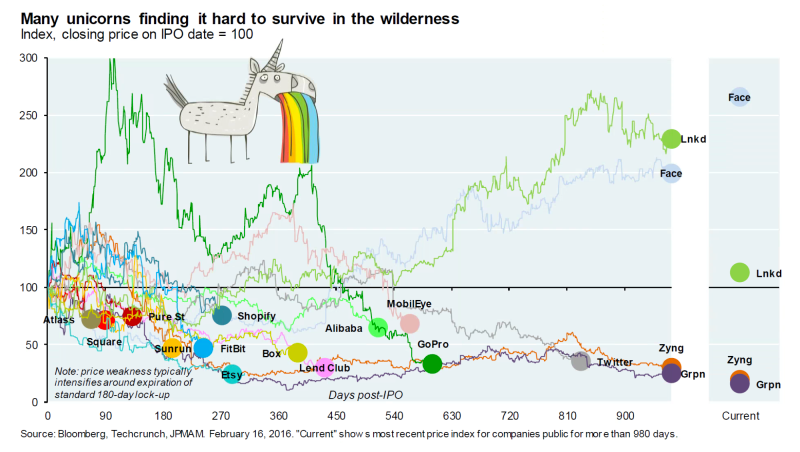 Within tech, FinTech is a hot sector and the recent dread and consternation of the “Downround” in Silicon Valley has not yet been evident in the Robo-Advisor space. The most recent funding round of $100mm by Betterment values them at $700mm, keeping them in the foal category, at least for now (note: both Betterment now has AUM >4bln and Wealthfront have grown AUM to > $2bln). If Schwab were to put a valuation on their robo division is could be argued it would be a unicorn ($5bln AUM). Vanguard was made for this space and now has >$10bln in robo AUM, having attracted >$33bln in overall new AUM in January of 2016 alone, a record in Vanguard’s 40 year history. Early signs are the hybrid model sits well with investors. Vanguard’s average account balance by age group; 25-34 $22k, 35-44 $55k, 45-54 100k, 55-64 $155k, 65+ 180k.

Missing from this list above is Blackrock, #1, the largest asset manager on Earth with better than a 5% share of global AUM. Blackrock bought FutureAdvisor to garner a toe hold in the robo space (45 employees and $600mm in AUM when purchased in August 2015). Their angle is unique in that the business has been housed within Blackrock Solutions (BRS) whereby they license their digital investment technology to Banks (RBC, BBVA, etc.), Insurance Companies and Advisors who are, rightly so, alarmed about getting swamped by the digital tsunami: 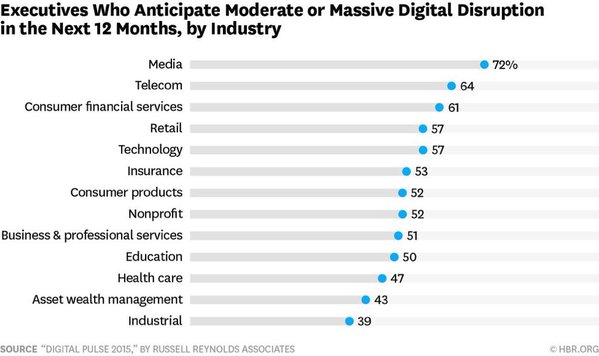 Who one choses to manage their money is a highly personal, highly emotional matter. It is called money because we all need it. The decision varies markedly from who you chose to drive you around town (Uber), network with friends (Snapchat/Facebook/WhatsApp/Twitter/LINE), be entertained by (YouTube, Dota 2, Netflix) and shop (Amazon).

It is yet to be seen if the explosion in passive investment strategies, many of which employ ETF’s, can stay the course through a full market cycle. Robo-advisers take passive to a different level (your cat provides more direct feedback in the pure model) and time will tell if end investors can stick to their chosen path. Large financial asset drawdowns typically see dopamine quickly replaced with epinephrine (adrenaline) and cortisol as a stress reaction in the lizard brain of humans. The rational, human brain (frontal lobe) likes smooth return profiles, which is why many money market funds carry stable value wraps.

While it can be dangerous to generalize, lets generalize. The typical Betterment or Wealthfront robo-advisor customer is more likely to be a millennial (born 1982-2004), with a much longer investment horizon than a typical Vanguard customer, robo advised or otherwise. Many millennials are unbanked, by choice and the investment ecosystem wants them back, if for no other reason than the massive wall of inheritance coming their way when their grandparents and parents surrender their physical form.

The 1% have had elements of robo-advice for years, but the latest trend brings it to the masses. No minimums (free at certain break points, 5 & 10K typically). All good trends.

Valuation. FinTech start-up/pre-profitability valuation is difficult, but we have some proxies which we can use for comps.

Betterment (Privately Held). Taking Betterment’s fresh $100mm funding round as an example. $4bln in AUM is driving a $700mm valuation. Let’s be generous and peg their blended fee at 25bp (0.25%) per annum. 25bp on 2 yards grosses $10mm for a metric of 70x revenue. As a % of AUM the valuation looks more stark at 17.5%. Tremendous growth rates in AUM and maintenance of margins will be required to get this foal to unicorn status 12-18 months out. This latest raise was large, which is prudent. Wealthfront raised a total of $129.5mm in 5 rounds from 33 investors with their latest raise of $64mm in October 2014.

WETF $10.82 – Wisdom Tree. $42.5bln in AUM, $1.5bln market cap, 19x P/E, 2.92% dividend. Valuation as a % of AUM 3.53%. Wisdom Tree’s 2 benchmark currency hedged ETF’s for Japan and Europe make up over 1/2 their total AUM. The recent screening of Yellen versus Batman (ECB) versus Superman (BoJ): Dawn of the Global Currency Unit did not play well with focus groups and both DXJ and HEDJ are seeing steep redemptions.

There are a number of bespoke algorithmic offerings available in the market today for those buying into the active/hybrid DIY model. For the cost of an expensive date night at Delmonico’s (2nd label French vino) you can subscribe to IBC’s Exodus market intelligence.

77% accuracy in calling short term tradable bottoms (mid 3% per) since 2009. Of the listed motley crew of tickers above, only Wisdom Tree has recently gotten close to an O/S signal (1.2 on Tuesday past versus the 1.15 threshold required). WETF popped 4% + with the genki overall market yesterday. Sometimes it pays to wait for the fat pitch. JCG