ValueWalk
Home Business Are America’s Workers Playing Hard to Get? 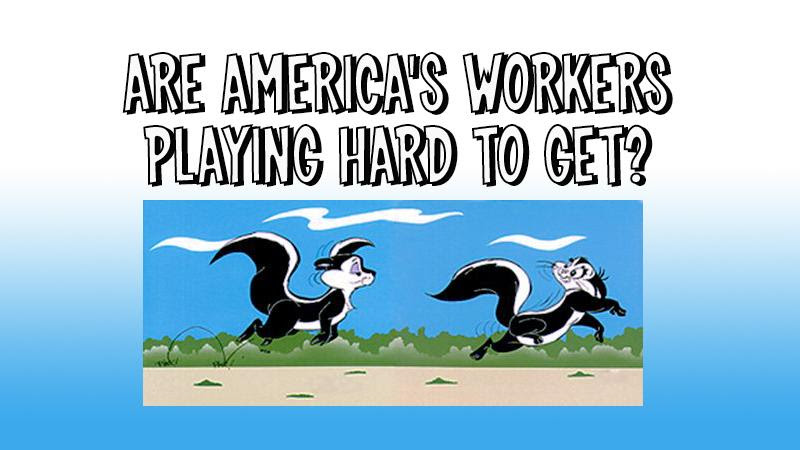 Penelope Pussycat might not be the most iconic of Generation X cartoon characters, but she does stand alone in her capacity to confuse. Penelope, a lovely black and white fluff ball of a cat, had a seemingly inescapable penchant for finding herself the unsuspecting wearer of an unnatural and very skunk-like white stripe. A stripe which would of course render her irresistible to the resolutely romantic, albeit malodorous, Pepé le Pew. And so with the stage set, the chase would ensue to Penelope’s long-suffering protestations.

As is the case with all things in love and war, complications arose. There were exceptions, moments when the shoe would find itself on the other foot and Penelope became the pursuer and the dapper, prancing skunk the pursued. This half-century long chase has led some skeptics to ask whether Penelope was not in fact just playing hard to get all along.

The recent string of robust job gains has led others to ask whether workers have finally broken through to the stronger position of pursued as well, with employers in the hunt for their increasingly valuable skill sets.

It’s even rumored that Federal Reserve Chair Janet Yellen’s favorite gauge of labor market strength is the so-called ‘quits rate’ which rises in lockstep with the percentage of workers who feel confident enough to tell their employers where they can put their jobs (the sun doesn’t shine there). Hence the hysteria when the quits rate ticked up to 2.2 percent in December, the highest in over eight years. The conclusion: workers had finally gained the upper hand.

Suffice it to say, the party didn’t last for long. The quits rate retreated back to 2.0 percent in January (the data series is quite lagged and that is the most recent data on hand) and other forward-looking indicators suggest momentum is waning.

A superficial glance at the headline data is misleading on several levels. For starters, at 195,000, the number of jobs cranked out by the private sector slid in at 38,000 fewer positions than the past six-month average. Dig deeper, though, and you’ll note that the 4,000-job downward revision to January’s numbers masked more troublesome figures. The numbers behind that number: Temporary employment was revised downwards by 22,000 while government jobs were revised up by 23,000.

You may be familiar with the tendency of rising temporary workers portending positively for future permanent job gains. Sensing an accelerating rate of gross domestic product (GDP) growth, employers dip their toe in the water by bringing in temporary workers that can in turn be converted to permanent employees if preliminary signs of growth pan out.

The opposite is true of a slowing economy. Firms tend to reduce workers’ hours and trim temporary staff to prepare for what’s to come. “It’s easier to cut hours and contract workers when the economy is slowing, and that is precisely what the data show,” observed AIG’s Jonathan Basile following the data’s release. “Neither the workweek or temporary employment are in a recovery mode.”

To be precise, temporary job growth has decelerated to an annualized pace of 1.9 percent; it was growing at 4.6 percent a year ago. As for the workweek, it fell to 34.4 hours dragged down by a 0.4 percent decline in the manufacturing workweek. The factory sector itself defied forecasts calling for a gain of 2,000 for the month. Instead the sector shed a net 29,000 jobs, the most since December 2009.

The truly good news in the report was that so many sidelined workers endeavored to re-enter the workforce. Only 246,000 of the 396,000 re-entrants were able to find jobs thus causing the unemployment rate to tick up to 5.0 percent from February’s 4.9-percent cycle low.

As for the prospects for further gains in those actively participating in the labor market? A Morgan Stanley report noted that the number of people not in the labor force but saying they want a job fell to 2.3 percent of the working age population. That puts those who are down but not out of the workforce near an eight-year low and not much higher than the prerecession average of 2.1 percent.

The report’s takeaway: “There do not appear to be too many discouraged workers remaining who could potentially keep reentering the labor force to continue offsetting the demographic downtrend of 0.2-0.3 percent a year in the participation rate.”

And it wasn’t only the unemployment rate you read about in the paper ticking up. The underemployment rate, which adds in those who are working part-time for economic reasons, also rose off its low for the cycle. While it’s a cardinal sin in economics to equate one month to a trend, other data have been flagging today’s rising unemployment rate for some time.

“Why would unemployment stop falling?” Basile asked. “With GDP growth at or below trend for the last three quarters, including the current quarter, Okun’s Law should eventually catch up.”

Basile’s analysis being spot on is critical to his Street cred given he’s anything but a plain vanilla economist. As Head of Business Cycle Research, he’s tasked with sniffing out trends when they are in their infancy. That’s why he’s had his eye on the particular query inside the Conference Board survey that gauges workers’ perceptions of the job market – that of whether workers perceive jobs as harder to get.

“The ‘Jobs Hard to Get’ is a leading indicator that turns before the end of a business cycle,” was Basile’s observation. “Ask consumers about jobs and money and they can give you a good idea. They know if they have a job. They know what they make.”

As for the recent string of survey data, Basile worries that, “Jobs ‘hard to get’ troughed seven months ago implying we’re in the latter innings of the current cycle according to historic indicators.” Nine consecutive months of deterioration has historically coincided with recession.

In a seemingly heretical moment, Basile threw out one last nibble to add to all that food for thought with his unorthodox suggestion that there is a form of unemployment that is the economy’s friend. “Yes, Virginia. There is such a thing as good unemployment,” Basile quipped.

It goes like this: When the number of folks leaving their jobs are added to those who are unemployed for extremely short stints (five weeks or less) you get a feel for the underlying velocity of the labor force. If you’re sure you can get a better job and quick, you’re apt to have less anxiety about being among the unemployed. And if you do indeed replace your paycheck as quickly as you’d hoped, then your bravado is validated. Make sense?

Well, there just happens to be an economic indicator for that, one that combines these two metrics into ‘Job Leavers who are Very Short-Term Unemployed.’ It does a bang up job of explaining the last three decades of income growth, or lack thereof. And if you must know, it stopped improving three quarters ago, which indeed qualifies as a trend.

Add to this the rolling over in Conference Board help wanted online ads and it’s hard to deny the data are lining up to give credence to the notion that labor market strength has peaked and is in remission.

Of course, it helps to know where to look to get a first read. Just think of Penelope the next time you tune in to a talking head assuring viewers all is well in the job market. Especially at first glance, looks can, and do, deceive.

For a full archive of my writing, please visit my website Money Strong LLC at www.DiMartinoBooth.com

Click HERE for The Smell of Dryer Powder in the Morning