It was predictable: gold takes a breather, and a flash mob of gold agnostics and atheists forms to point out the price is falling and that there’s little reason to get excited about it.

That’s the problem with investing bias; you don’t look for, or just ignore, evidence that shows another factor is in play.

And that’s the case with gold. Not only is a pullback normal after an asset rises 20%—like gold has done in the first nine weeks of the year—there’s a strong seasonality pattern to gold.

Since 1975, when gold again became legal to own, here’s its average performance by month. 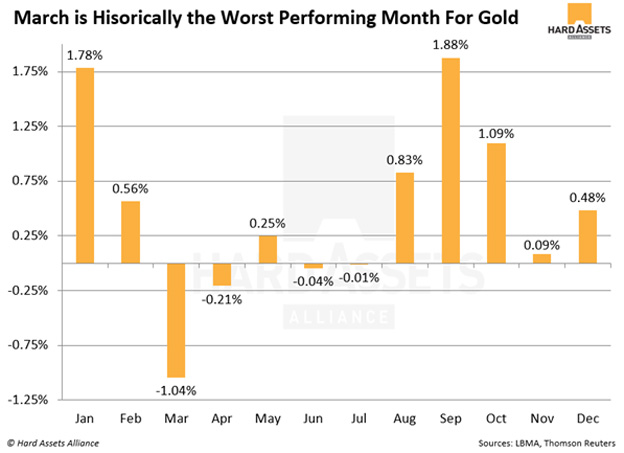 Over the past 40 years, gold has typically fallen more in March than any other month.

So, it’s not surprising to see gold’s latest retreat.

Every bull market has its ups and downs. And the latest down in the gold price seems to have arrived right on schedule.

As uber hedge fund manager Dan Tapiero points out, serious cracks have appeared in the monetary and economic system that should compel investors to own gold right now.

He’s especially concerned about the state of European banks and that contagion could spill over into the global banking system and cause another global financial crisis.

Dan believes that if we get a crisis beyond the magnitude of prior crises—something he thinks is very possible—gold will trade over $3,000 per ounce.