The Estimize consensus is calling for EPS of -$0.04 and revenue of $152.54 million, right in line with Wall Street estimates. Compared with Q4 2014 this represents a projected a YoY decline in EPS of 156% while revenue is expected to grow 39%. The Estimize community is bearish on Yelp’s profitability, cutting EPS estimates 78% since Yelp last reported. 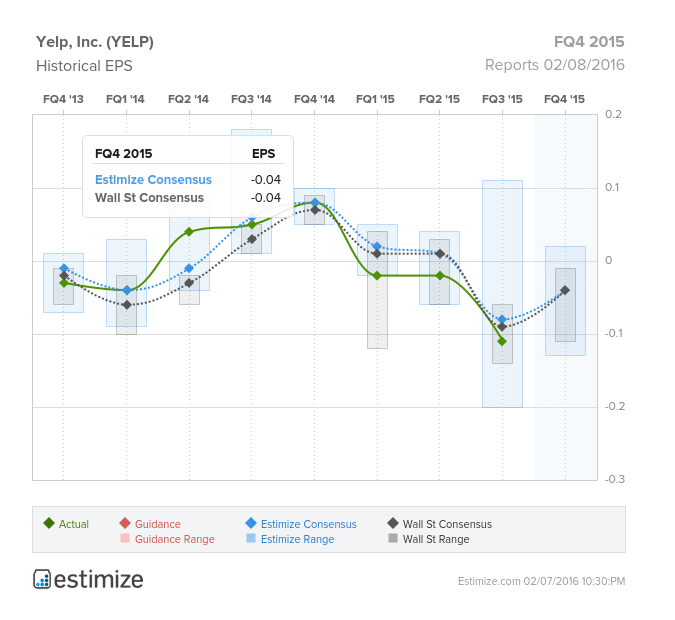 What to Watch: Yelp is plagued with many problems which have weighed heavily on the company’s profitability. One of its biggest concerns is the huge drop in user traffic, which bodes poorly for the company’s ad revenue. Yelp generates the majority of its traffic from two main engines: its mobile app and Google. While the mobile app has performed remarkably well so far, its presence on Google and other search engines has declined. Still, the company invests heavily in marketing even though it has failed to stimulate comparable top-line growth. During the week of December 14, 2015, Yelp and OpenTable officially confirmed they had ended their relationship, and Facebook quietly launched their Professional Services feature to directly compete with Yelp. Since then, share prices for YELP have declined 35.8%. Despite a strong user base and sales force, Facebook’s entry into the market will have the largest impact on Yelp’s business. 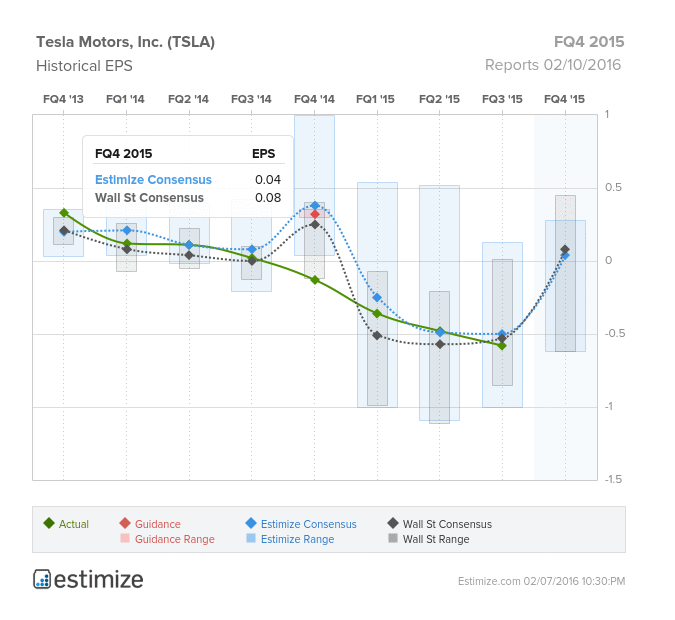 What to Watch: This year Tesla delivered a record 50,000 vehicles but failed to meet volume expectations the company set earlier in the year. Consequently, shares of Tesla have plunged over concerns that the company won’t be able to execute on its ambitious growth plans. One of the main reasons Tesla hasn’t been able to deliver profit growth is because the company has been spending mercilessly. Given operating expenses account for almost 50% of the company’s revenue, missing volume forecasts put a severe damper on margins. Tesla has made heavy investments in launching its first SUV and building out a sustainable battery. If the Model X SUV misses sales forecasts like the Model S sedan, it could have a crippling effect on the stock in 2016. As production ramps up, energy credits from green technology are expected to shrink proportionally to sales growth. Ahead of Tesla’s earnings, the Estimize community has frantically dropped EPS estimates by 56% in the last 3 months, reflecting a bearish sentiment on the company’s ability to turn a profit in Q4. Sharing this belief, some analysts have recently downgraded Tesla from a hold to sell rating.

The Estimize consensus is calling for Zynga EPS of $0.00 and revenues of 185.03 million, in-line with Wall Street but just ahead of corporate guidance. The Estimize community has been bearish on Zynga’s earnings this quarter, pushing EPS and revenue estimates down 16% and 11%, respectively, since the last quarterly report. 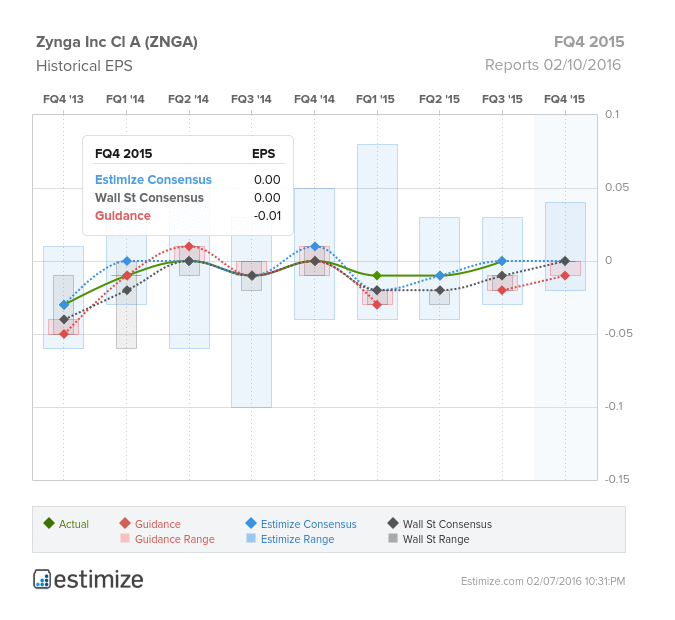 What to Watch: Despite coming off a positive earnings and revenue surprise in Q3, the best days seem to be behind Zynga. The company has failed to release a hit game since their FarmVille and Texas HoldEm Poker games. Since its partnership with Facebook ended, even its flagship game, Farmville, has decreased in popularity, after hitting a peak of 80M players in 2010. Two of the company’s most important metrics, daily active user (DAUs) and monthly active users (MAUs) have plunged as the company searches for a new growth catalyst. In Q3, DAUs were down 21% YoY while MAUs were down 27%. Furthermore, Zynga delayed the launch of two new anticipated games, CSR2 and Dawn of TItans, from Q4 2015 to Q1 2016. Due to the delay, the company issued weak Q4 guidance of $-0.01 for EPS and $177.50M for revenues. Zynga appears to be in trouble if it doesn’t deliver another hit game soon, and salvage what’s left of it’s user base.

The Estimize consensus calls for EPS of $0.01 and revenue of $847.77 million, slightly higher than both Wall Street and company guidance. Compared to Q4 2014, this projects a YoY contraction in EPS and revenue of 80% and 7%, respectively. Despite modest third quarter earnings, the Estimize community has been more bearish on Q4 earnings. In the past three months, Estimize users have cut EPS estimates by 33% and revenue by 2%. 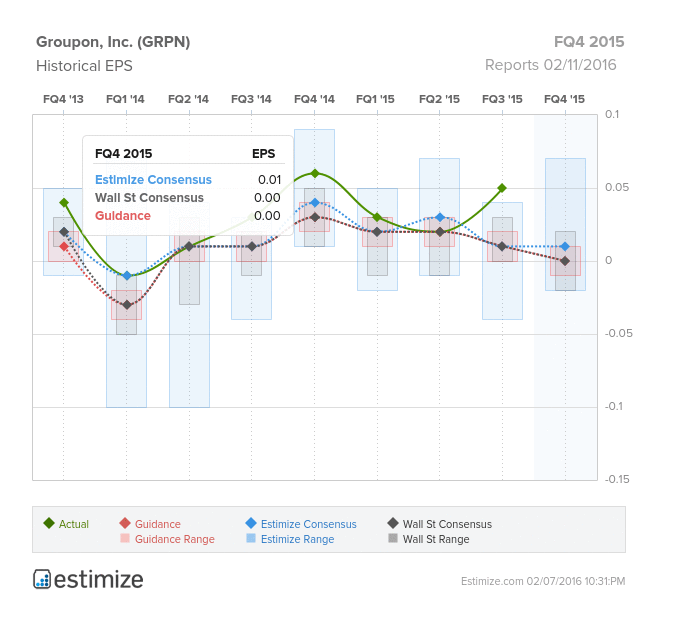 What to Watch: Last quarter, Groupon appointed a new CEO, Rich Williams, in hopes of turning around the struggling company. The ongoing restructuring activities under new leadership is expected to come at the expense of shareholders. The company is shifting its strategy from a deal business to a local marketplace focusing on marketing, international expansion and shopping. This reorganization will weigh heavily on financials in the near term as stock prices continue to plunge. Marketing initiatives, which had been neglected in the past, are now a strategic focus as GRPN attempts to stimulate brand awareness. Moreover, stiffer competition and waning macroeconomic conditions pose a serious threat to Groupon’s profitability. Recently, Groupon issued weak Q4 guidance pointing to  declining gross billings and increasing costs of restructuring activities. With shares trading less than $3 a share, Groupon has no wiggle room to miss its numbers this Thursday. Any positive surprise could give the stock a much needed boost.

The Estimize consensus is calling for EPS of $0.09 and revenue of 333.02 million, slightly above Wall Street’s estimates. Compared to Q4 2014, this represents a projected YoY contraction in EPS of 47%. The Estimize community is bearish on Pandora’s profitability, cutting EPS estimates 35% in the past three months. 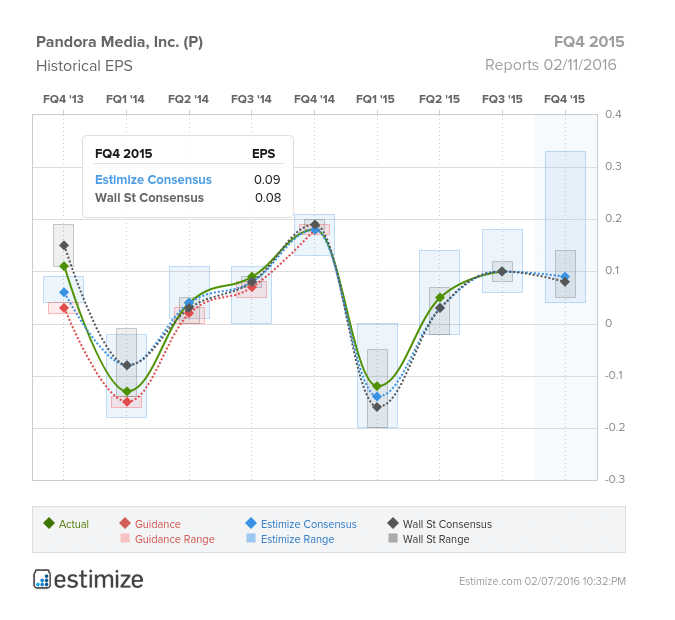 What to Watch:  In a crowded music streaming industry, Pandora’s fourth quarter earnings are expected to underwhelm. The emergence and growth of Apple Music and Spotify have taken the industry by storm, leaving Pandora on the sidelines. With active users growing at a slower pace than the aforementioned platforms, Pandora has made heavy investments in international expansion, new acquisitions, and improved marketing initiatives to revitalize growth. So far, Pandora has failed to expand outside of the United States, while both Apple and Spotify have a strong presence in almost 100 countries. The company will focus on signing direct licensing deals with record labels in its global growth. On top of costly label deals, currency headwinds and higher royalty fees will put downward pressure on Pandora’s margins.

Be sure to get your estimates in for the companies reporting this week!