Another Tough Report Ahead for Target Corporation (TGT), will Online Sales Continue their Downward Trend?

Target Corporation has a lot to prove when it reports fourth quarter results before Wednesday’s opening bell. After four consecutive quarters of earnings beats, the retailer reported a disappointing third quarter. While earnings per share (EPS) still rose 59% year-over-year, revenues declined 1% for the first time since Q3 2014.

For all of February, the Estimize community had been calling for a slight miss on Target. However, just yesterday, the Estimize Mean shifted higher and in-line with Wall Street at $1.54, with the Estimize Select Consensus* ticking up to $1.55. Revenues are also slightly higher at $21.896 billion as compared to the sell-side’s $21.861 billion. This projects meager year-over-year EPS growth of 3.3% and revenue growth of 0.7%. The company perennially beats Wall Street on the bottom line 71% of the time while only besting Estimize EPS estimates 44% of the time. 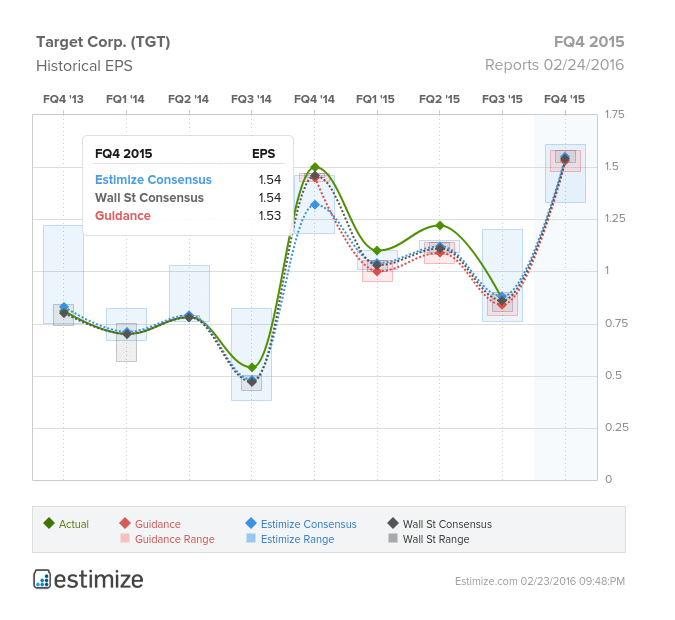 Target’s recent downward trend in online sales has been troubling to investors. While the retailer has deployed significant resources to develop its online platform and sturdy its omni-channel facilities, the numbers have yet to reflect any improvement. Last quarter, digital channel sales increased 20%, falling short of the company’s guidance for 40% growth and of second quarter results which saw online sales growing 30%.

However, it looks like the company will show a turnaround for the fourth quarter, reporting record holiday online sales in part due to heavy promotions and the popularity of Star Wars related merchandise. Still, many will admit there is still work to be done to improve the customer online shopping experience, something in which Target is investing heavily. 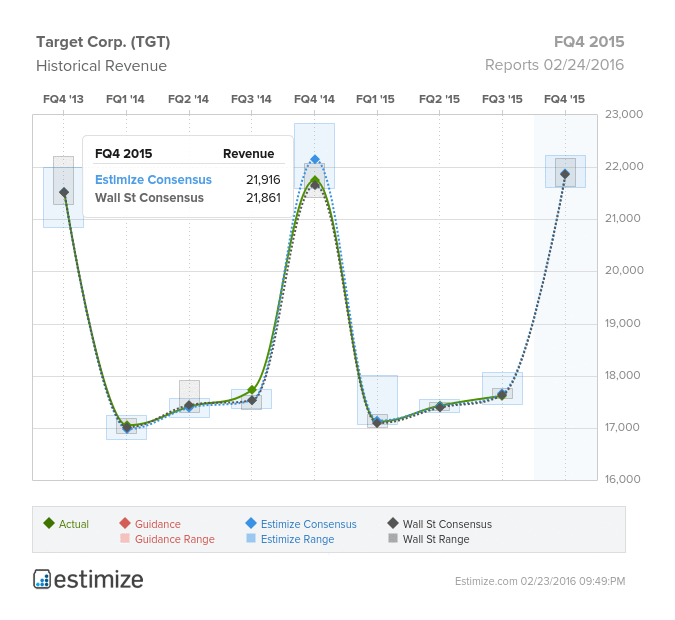 In addition to ecommerce, Target Corporation is also investing in increasing the product assortments in their Style, Kid/Baby and Wellness categories. Food will be a large focus in 2016 as well, a segment that bolstered sales last year. The expansion of smaller format stores under the TargetExpress name are helping the retailer penetrate smaller neighborhoods and shopping plazas.

As with all retailers, same store sales growth is one of the most important metrics to track, and results from Target have been lackluster throughout 2015. Same store sales are expected to remain roughly flat quarter-over-quarter for the fourth quarter, at around 1 – 1.5% to achieve the company’s full year guidance of 1.5% – 2%. This would still surpass results from fellow retailers such as Wal-Mart, Nordstrom and Macy’s.

Aggressive cost cutting measures, such as the company’s recent decision to discontinue their struggling Canadian business, is expected to help finance these new initiatives and bolster free cash flow in 2016. Furthermore, Target has eliminated over 3000 stores and corporate employees in the U.S., estimated to save the company $2 billion.