I was surprised when Japan lowered their interest rates to negative territory on January 29, 2016.  I don’t think that anyone saw this coming because, not only did they publicly state that they would never do this, but we were also six years into a recovery that has been accompanied by non-stop accommodative policies from the world’s Central Banks.

What is the history of negative rates?  It is a short one.  Negative rates had never been tried prior to 2012, but in 2012 Denmark moved to negative rates and this was quickly followed by Germany, France, the Euro Area, Switzerland and Sweden… and now Japan.  Following Europe’s lead, Japan is likely to move even deeper into negative rate territory.

Why negative rates?  When the financial crisis hit in 2007/2008, and this period was really a depression and not a typical bear market, the Central Banks (the Federal Reserve is a “Central Bank”) transferred a huge amount of money into the smaller banks.  These banks were supposed to loan the money out to “business interests” so that the economy would be “stimulated” again by increased new business activity.  But the smaller banks did not feel secure loaning out this free money during such a bad economic period.  Instead they parked it right back at their sovereign Central Bank, earning interest on the money; they could do this because it is legal to do so.  Not a bad gig if you can get it.  Why loan your “gifted” money to a business where youmight receive interest payments back when you can park it right back with the Central Bank of your country and get a guaranteed interest payment on your “gifted” money.  It pays to be a bank.

Why Japan?  Japan cannot get out of the deflation trap, its young people have never known anything other than deflation, and this is a desperate attempt to create inflation.  Also, the Japanese economy is hurting because its exports mostly go to China; China’s downward flight is approaching a hard landing.  In addition, Japan is very deep in debt and moving rates to negative territory allows Japan to refinance its debt at negative rates which allows the government’s interest payments to vanish.  This allows it to re-shift funds towards its massive aging population problem.

What is the risk to Japan?  Corporations in Japan are likely to start moving their investment capital out of the country, which would create a real mess.

But will the banks actually generate business loans?  I doubt that the small banks will be willing to generate many business loans with rates so low because the loans will have a high risk of default with minimal return.  Since it may not increase the velocity of money, it is likely to do almost nothing.  If the money is still not going anywhere then it still cannot be stimulating the economy… but it might drive certain assets higher.

Plus, the negative interest rates only apply to brand new Bank of Japan bonds and not to any of the zillions of bonds that they have already issued.  Who is going to want to buy these new bonds with negative rates?  Not me.  You’d basically be parking your money with the Bank of Japan for years and paying them an interest payment (a fee) in exchange for them “protecting” your money, and Japan is not a safe haven in the same way that Switzerland or the United States are.

Will negative rates create any investment BUBBLES?  Yes, a gigantic bubble is likely to re-form in the global housing markets.  To quote Yogi Berra:  “It’s deja vu all over again.”  Since most housing is being turned into REITs (income producing rental properties) by highly leveraged hedge funds, these REIT investment vehicles may get wrecked when interest rates finally begin to rise substantially.

Anything else?  According to a June 2015 report by the Bank for International Settlements, a policy of persistently low interest rates “runs the risk of entrenching instability and economic weakness.”

If money flows away from risk and toward safety, this would:

Negative rates are a big event.  The percentage of global GDP produced by countries with negative interest rates is now close to 25%: 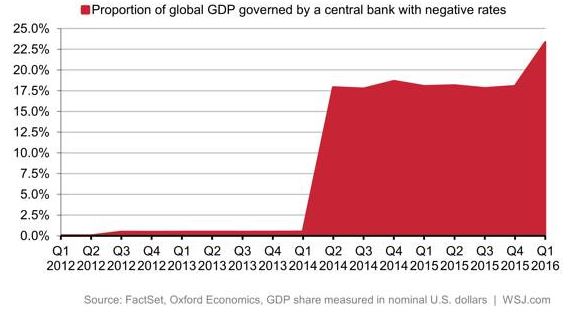 This 2015 chart from the U.S. Federal Reserve shows the extreme amount of assets already held by the (Central) Bank of Japan.. and the BoJ obviously felt that it simply wasn’t enough! 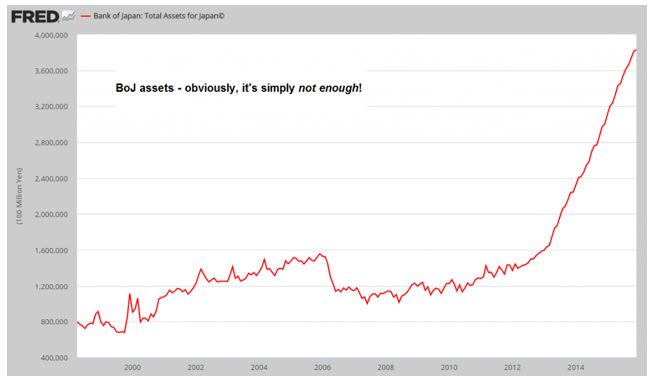 Shane Shepherd, senior vice president and head of macro research with Research Affiliates recently gave this opinion:  “This is not a short-term issue.  We expect lower interest rates for an extended period of time.  This is not a business cycle thing.  It’s structural.”

MarketCycle Wealth Management stands by its assertion that:

Current risk levels are quite high.  MarketCycle Wealth Management’s client accounts are currently positioned near neutral but also holding a large position in protective assets that will trigger should the market move lower from here.  There is still a chance of a greater correction.  The maximum downside (from February 1, 2016) for the S&P-500 is likely somewhere around an additional 15% before the market can finally move to new highs again.

New client accounts that are funded are being held in cash and waiting for a proper entry point.  Existing clients should be adding to accounts and the new funds will be invested at the most opportune time.  According to Wall Street wisdom, we should buy when there is “blood in the streets.”  From a secular viewpoint, the U.S. stock market is going much higher and anyone that isn’t willing to invest heavily (at the right times) will ultimately regret their folly.

Thank you for reading (but don’t miss the cartoon below).

LINK for this blog:  https://MarketCycleWealthManagement.com/Negative-Rates-for-a-Negative-Economy/ 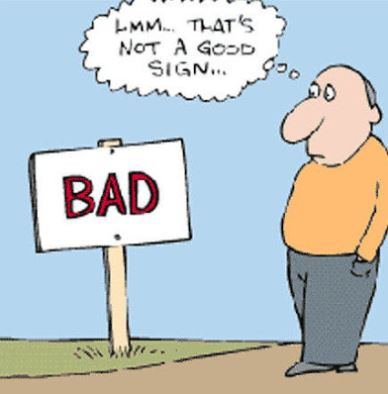