Expedia Inc. Looks Strong Going Into Its Q4 Earnings: Here’s What to Watch

Expedia (EXPE) is expected to close an impressive 2015 when it reports fourth quarter earnings February 10. Last year shares soared, finishing up 45% thanks to improved earnings, continued acquisitions and consolidation in the industry. This quarter, the Estimize community is calling for EPS of $1.05, a resounding 22% increase compared to Q4 2014 and 4 cents higher than Wall Street. Revenue estimates of $1.717 billion come in surprisingly lower than Wall Street but are still projected to grow 27% YoY. The outlook for Expedia remains promising as the company continues to show strong order growth prospects and benefits from the Expedia Traveler Preference Program. This feature allows travelers to pay when checking out of a hotel instead of at the outset and effectively eliminates the need to pay credit card fees. This is especially popular overseas, where Expedia is expected to see several headwinds from a strong dollar. Luckily for Expedia, its international exposure is not quite as high as its contemporaries, therefore exchange rates will have a minimal impact on the company’s margins. 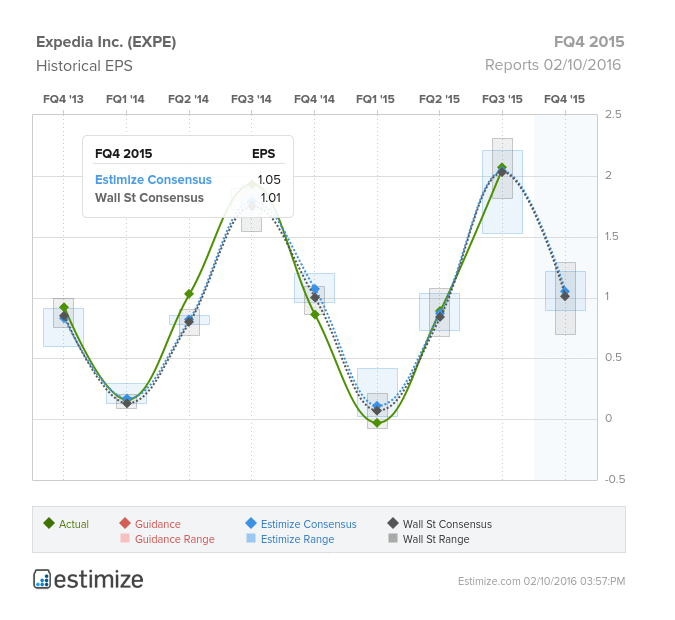 The major headlines that have lifted this stock were Expedia’s acquisitions of Orbitz, Travelocity and Homeaway. Following these business ventures, Expedia is now positioned as the dominant travel company in the U.S., followed by Priceline. The company continues to expand into international markets through strategic marketing efforts, increasing its inventory and acquiring key partnerships to build upon. With stronger demand in the travel market, both domestic and international order growth has performed remarkably well. Expedia’s expansion efforts will likely put pressure on margins driven by foreign exchange rates and heavy internal investments . The company generates a significant amount of revenue from inbound travel into the U.S., which has been adversely impacted by a strong dollar. That said, if Expedia can deliver strong earnings, share prices can continue their upward trend of 2015. 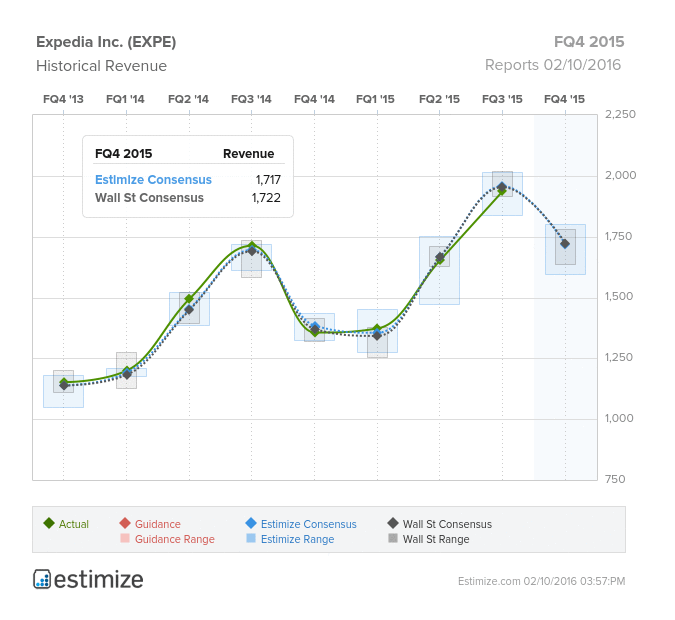 Do you think Expedia Inc. can beat estimates? There is still time to get your estimate in here!

Expedia To Ride SilverRail Past Competitors