The Estimize consensus is calling for EPS of $1.46, two pennies ahead of Wall Street, and indicating YoY growth of 15%. Revenues currently stand at $15.33B, quite a bit higher than the Street’s consensus of $14.93B, projecting growth of 11% from the year-ago period. 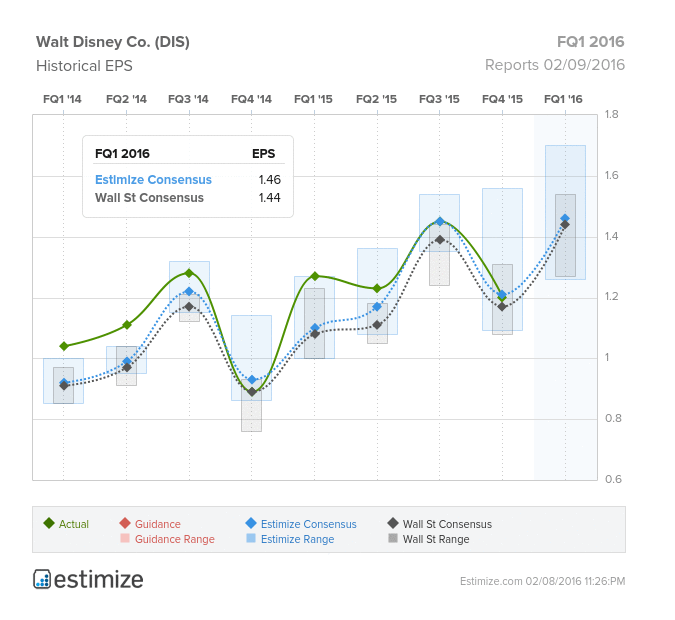 What to watch: If one trend is clear this earnings season, it’s that having ties to the blockbuster hit movie Star Wars: The Force Awakens, is great for a company’s bottom-line. Thus far, Electronic Arts and Hasbro, both of which sell popular Star Wars products, have reported impressive earnings for the quarter. Disney should be no exception as the producer of the film that has collected more than $2B worldwide. Their parks & resorts division is also set to open Star Wars themed attractions. The hope is that the success of the film should be enough to offset Disney’s slumping television business. Shares of Walt Disney have tumbled 22% in the last 3 months, in most part due to the fact their crown jewel, ESPN, comes under considerable pressure. ESPN has struggled to stimulate subscription growth as consumers transition from traditional cable packages to online TV content. The widespread adoption of  mobile content has lost ESPN 3 million subscribers in fiscal 2015 alone.

The Estimize community calls for EPS of $0.04, 4 cents higher than Wall Street while revenue estimates of $1.8B are right in line with the Street. The Estimize community has been bearish on Tesla’s profitability, moving EPS estimates down 58% this quarter, but still expecting impressive YoY growth of 130%.  On average Tesla has only beaten the Estimize EPS consensus 33% of the time. 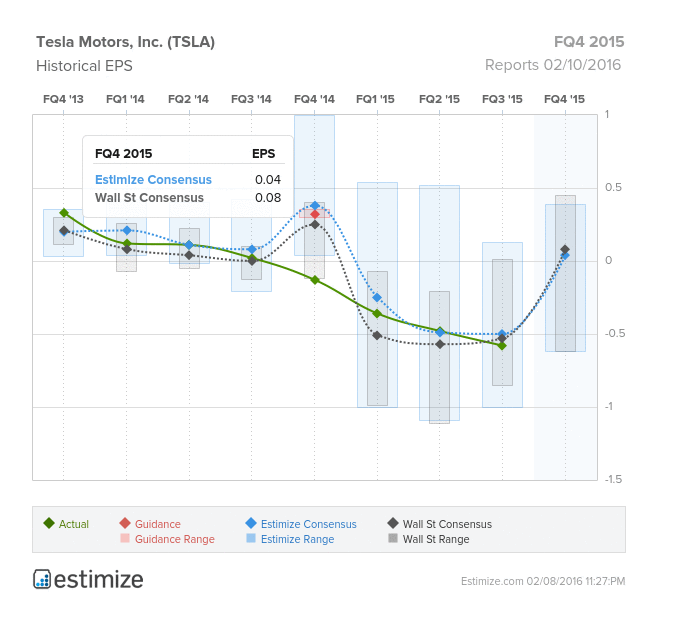 What to Watch: This year Tesla delivered a record 50,000 vehicles but failed to meet volume expectations the company set earlier in the year. Consequently, shares of Tesla have plunged over concerns that the company won’t be able to execute on its ambitious growth plans. One of the main reasons Tesla hasn’t been able to deliver profit growth is because the company has been spending mercilessly. Given operating expenses account for almost 50% of the company’s revenue, missing volume forecasts put a severe damper on margins. Tesla has made heavy investments in launching its first SUV and building out a sustainable battery. If the Model X SUV misses sales forecasts like the Model S sedan, it could have a crippling effect on the stock in 2016. As production ramps up, energy credits from green technology are expected to shrink proportionally to sales growth. Ahead of Tesla’s earnings, the Estimize community has frantically dropped EPS estimates by 58% in the last 3 months, reflecting a bearish sentiment on the company’s ability to turn a profit in Q4. Sharing this belief, some analysts have recently downgraded Tesla from a hold to sell rating.

The Estimize community calls for Twitter EPS of $0.13, just one penny higher than Wall Street. Revenue expectations of $711.79M are greater than both the Street’s consensus of $709.24M and guidance of $702.50M. Despite some concerns over how the company will perform in Q4, Twitter has managed to beat the Estimize EPS consensus 70% of the time since its Q3 2013 debut, and has surpassed revenue expectations 80% of the time.

What to Watch: Once hailed as a champion for its live action feeds and multiplying user base in the social media space, Twitter has taken a nosedive from its all-time high trading price of $53.49 to $14.89 as of today. User growth seems to have hit a standstill, unlike other social platforms such as Facebook which continue to see improved engagement numbers. Twitter often comes under fire for not measuring up to Facebook, the darling in the social media space. Many analysts believe at this point, monthly active users (MAUs) and daily active users (DAUS) should be increasing at a much faster rate. Not only is the number of users plateauing, but user engagement as well, with the volume of tweets decreasing in the latest quarter. Several new features meant to remedy these issues, such as a reverse chronological order timeline and “Moments” have not received a positive response. One of the largest concerns this quarter is around CEO Jack Dorsey, and whether he has the capacity to lead a struggling Twitter as well as his other company, Square.

The Estimize community calls for EPS of $0.40, in-line with Wall Street. Revenue expectations from Estimize are actually slightly lower at $4.807B as compared to the Street’s $4.811B. 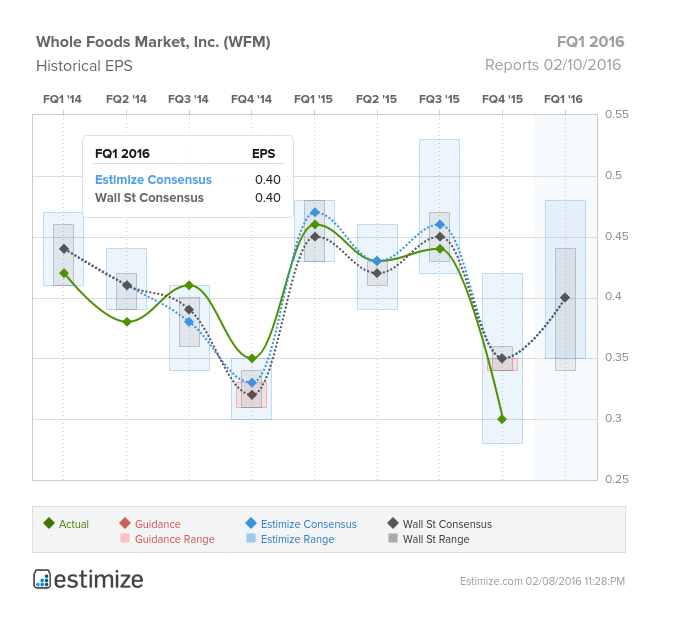 What to Watch: 2015 was a rough year for Whole Foods, missing or meeting on earnings and revenues every quarter this year, seeing the value of its stock fall by nearly 33% and receiving some bad publicity to top it off. Same store sales, one of the most important metrics to consider with the retailers, came in at -0.2% in the latest quarter, a testament to stiff competition in the organic and natural foods space. In hopes of shedding it’s “Whole Paycheck” title, the company will be launching a value-focused chain under the name of its “365” store brand. The first three store locations are slated to open in 2016, with up to an additional 10 stores opening in 2017. All of these initial locations are set to open in western states, including Washington, Oregon, and California. This is in an attempt to stay competitive with other brands such as Wal-Mart, Kroger and Target which are starting to offer organic items at more competitive prices.

The Estimize community calls for EPS of -$0.36, just one penny higher than the Wall Street consensus and corporate guidance. Revenue estimates from Estimize are also slightly more bullish at $189.59M vs. Wall Street at $185.19M and guidance of $184.5M. 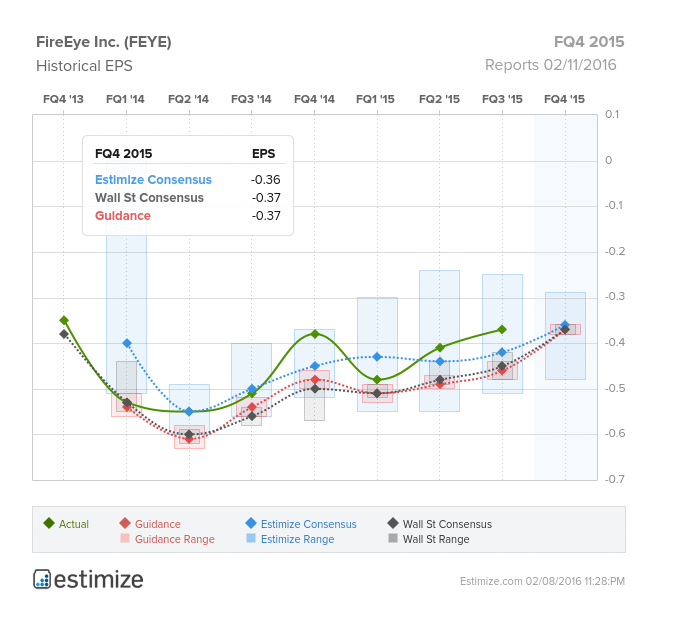 What to Watch: While we are very bullish on the cybersecurity industry here at Estimize, not all names in the space are winners. FireEye, an early favorite as the cybersecurity industry took off, has been slowing as of late, only beating the Estimize EPS and revenue consensus 43% of the time since it’s September 2013 IPO. Smaller competition such as Palo Alto Networks have been stealing a considerable amount of market share. Just a few weeks ago FEYE released some preliminary results for Q4, revealing that revenues should be within the initial guidance range of $184 – $185M. Total billings are expected to fall within $256 – $257M due to subscription, support, and professional services growth. CEO David DeWalt said the company expects to grow organic bookings by 20% in 2016 and achieve positive free cash flow. Any additional good news out of Thursday’s report should help the stock which is already down 42% this year. The company has also ramped up its acquisition activities, recently buying Invotas and iSight Partners, with rumors still floating around that Cyberark is on the horizon.